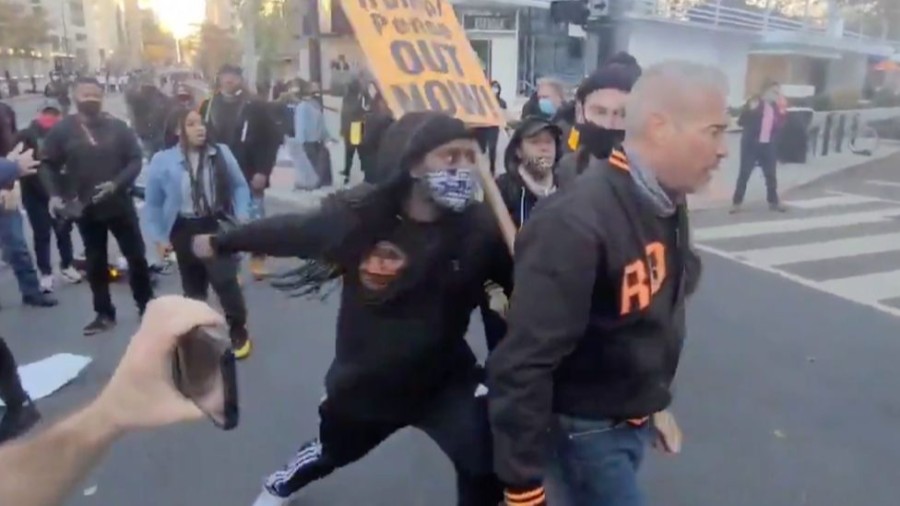 A protester who was arrested after he punched a supporter of President Donald Trump is also a registered child sex offender, public records show.

The Metropolitan Police Department arrested 39-year-old Kenneth Wayne DeBerry on Saturday for disorderly conduct, including inciting violence, aggravated assault, and felon in possession of a firearm after police found he was carrying a handgun, according to an MPD press release.

According to the MPD Sex Offender Registry, DeBerry is a registered sex offender who was convicted in Washington, D.C. in 2008 of second degree child sexual abuse against a person under 16 years of age.

DeBerry was arrested with three others during the Saturday incident, according to MPD, which occurred in the 1700 block of I Street, Northwest during demonstrations following the Million MAGA March.

“The suspects were involved in a collaborative effort to incite violence during first amendment assemblies at the listed location,” the press release said. “One of the suspects struck the victim rendering him unconscious. Other suspects assaulted the victim and took his property. Four suspects were apprehended at the scene by responding officers.”

Kenneth Wayne DeBerry, 39, of DC, charged w/aggravated assault, inciting violence & being a felon in possession of a gun per @MrAndyNgo https://t.co/BvAhG07umW pic.twitter.com/IqTF69tfZT

Video footage showed the attacker come up behind the Trump supporter and punch him so hard that the victim fell on his face to the ground and lay still for several moments before those around him helped him to his feet. As he lay on the ground, a person briefly stomped on him.

The video footage showed blood running down the victim’s face and on his hands as people around him helped him to his feet. A man prayed over the bloody and stunned Trump supporter, and a police officer in the video appears to be calling the incident in.

Prayer, Rallies and Riots: What One Pastor Experienced on the Ground in DC