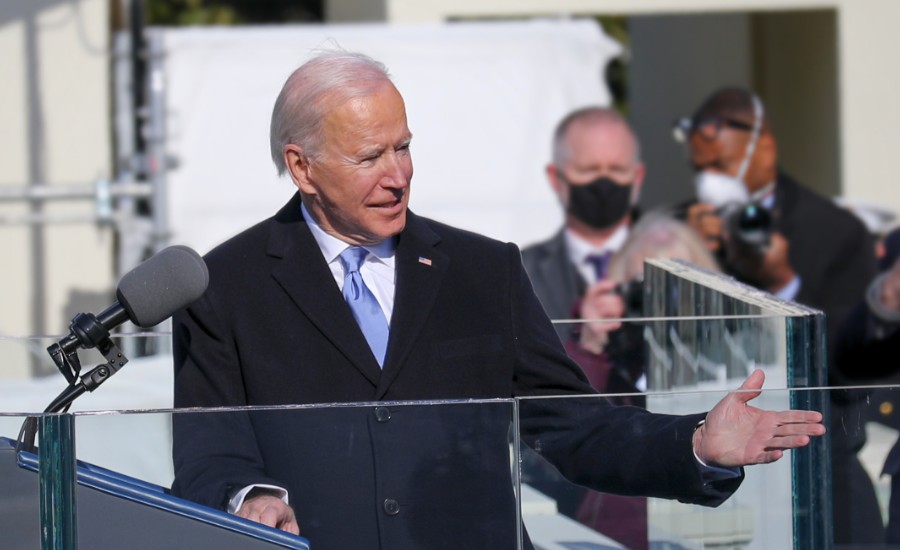 Now that the Democrats won’t have Donald Trump to kick around anymore, they’ll do it anyway, if for no other reason than to keep your eyes off their extremism.

While President Joe Biden is talking about “unity and compromise,” the leftist machine is still obsessing over Trump (by design) and demonizing and silencing his supporters. Leftists don’t want unity and compromise, which has been clear since Trump announced his candidacy in 2015. They want total control and submission.

Their strategy is to keep the spotlight on Trump to continue to capitalize on the week from hell during which the D.C. riots occurred, milking from it every last ounce of negativity to discredit and neuter the MAGA movement. Meanwhile, Biden and his handlers are conducting the American freight train leftward at full throttle.

Our job is to counter their propaganda and resist every leftist executive order and policy initiative with as much force as Democrats resisted Trump from day one — not for payback, not to be petty but for the good of the nation and our fellow citizens.

The Media’s Glee and Biden’s ‘Unity’

Progressive media outlets are beside themselves with glee; they feel empowered to renew their push to dismantle America as founded and use their fascist social media allies to implement their radicalism.

Does that sound like an agenda of unity and compromise? Aren’t you tired of disingenuous rhetoric from politicians? Biden is pretending with one hand that he is unifying and compromising while using his other to misrepresent and vilify Trump’s record.

It’s certainly Biden’s prerogative to push his preferred agenda, but could we please dispense with the double talk? Biden’s actions are not in the spirit of compromise, and they will damage the United States, not undo damage.

The ‘Terrible Damage’ From Trump

But in the spirit of humoring Biden’s narrative for discussion purposes, let’s ask ourselves what terrible damage Biden is trying to undo. Well, he’s halting funding for the construction of a border wall. But did the erection of a border wall harm America? It did the opposite, and discontinuing the project will, in fact, harm the national interest.

Like the good Catholic he professes to be, Biden will rescind the so-called Mexico City policy that pro-life Trump reinstated in 2017, which blocks nongovernmental organizations that receive federal funding from providing abortion services.

Biden is canceling the Keystone XL pipeline, which will harm the United States and Canada and help our adversaries — but it will appease environmental radicals, as will Biden’s move to reenter the Paris climate accord in 30 days. In further genuflection to environmentalists, Biden is reversing rollbacks of vehicle emissions standards, though in 2017, U.S. carbon emissions dropped to their lowest levels since 1985. But Democrats never want to let a fake crisis go to waste.

The principal reason our emissions have decreased, by the way, is the shale gas revolution, which Biden and crew will probably try to end in an upcoming war on fracking. Adding insult to injury and guaranteeing further damage to the United States, Biden will impose a temporary moratorium on oil and natural gas leases in the Arctic National Wildlife Refuge.

The Radical Left’s Ideas on Racism

Biden designated Susan Rice, no stranger to political controversy and divisiveness, to lead a “robust, interagency” effort to force all federal agencies to make “rooting out systemic racism” a priority. I hope people understand, then, that by doing this, the Biden administration is adopting the ideas of the radical left on critical race theory, which, a short time ago, was a kookish theory far outside the mainstream of thought and propagated by leftist academics. Now the president of the United States is telling us that racism is so deeply ingrained in our institutions that it will require a systemic overhaul. Do you honestly believe that? Do you have the courage to say what you believe anymore, or do the thought police and cancel culture enforcers have your tongue in a vice?

I don’t see how we can reduce racial tension in this country when the left is constantly pointing fingers and agitating. Everything is race, race, race. This exploitation might not be as toxic if Democrats, including Biden, hadn’t been trying to cast all conservatives as bigots, but sadly, they have. It also might not be as toxic if Democrats weren’t using race to villainize conservatives and as a Trojan horse to usher in their socialist agenda.

Democrats want you to forget this, but Trump amassed a mile-long record of accomplishments that dramatically improved America, not damaged it. His policies triggered an unprecedented economic boom with enormous increases of middle-class family income and record-low unemployment rates, especially for minorities. For 40 months in a row, there were more job openings than job hirings. African American homeownership increased, and income inequality decreased.

So, could we please keep our eyes on the big ball and not allow the left to divert us? They know Trump’s policies didn’t damage the United States, but they have to convince Americans otherwise to facilitate their fundamental transformation of America, which former President Barack Obama began and now seeks to complete during what has been ominously dubbed his third term under the failing Joe Biden.

Don’t fall for it. Resist.