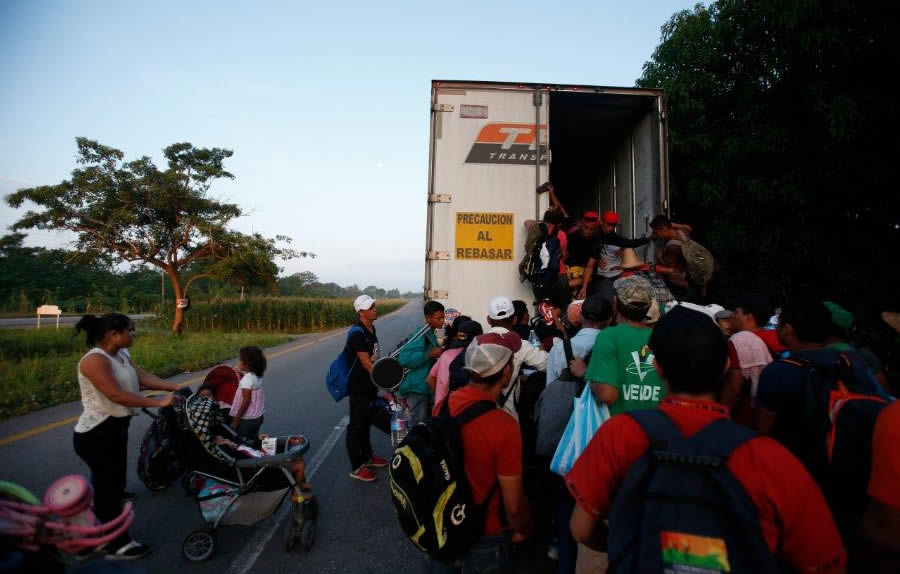 A mother with a baby in a stroller waits in hopes of boarding a tractor trailer, as the migrant caravan makes its way between Pijijiapan and Tonala, Chiapas state, Mexico, Friday, Oct. 26, 2018.

Republicans believe their opposition to the migrant caravan filled with thousands of illegal immigrants who are approaching the U.S. border will help energize their base before the Nov. 6 midterm elections, while many Democrats have continued to remain silent on the issue.

The caravan, which was roughly 2,000 miles from the U.S.-Mexico border near Tijuana and about 800 miles from the southern tip of Texas as of Thursday, has been a key issue for Republicans less than one week out from the midterm elections, as GOP candidates have been hammering their Democratic opponents for not mentioning the potential threat to the U.S.

The Republican National Committee (RNC) and Republican strategists have all echoed similar messages, saying the migrant caravan would indeed help the GOP before the midterm elections — many saying it reminds voters that Democrats are putting U.S. citizens in danger. They also mentioned how the silence from Democrats on the issue will end up helping Republicans, who have so vocally denounced the caravan entering the country.

“From their open border policies to their calls to abolish ICE, the caravan is yet another reminder to voters that Democrats have put the sovereignty of our country in jeopardy with their extreme immigration views. Meanwhile, Republicans are protecting America by working to legally control our borders and keep dangerous criminals from entering our country,” RNC spokesman Steve Guest told The Daily Caller News Foundation in a statement.

Mark Krikorian, the executive director for the Center for Immigration Studies, told TheDCNF the caravan “is a godsend for Republican candidates,” saying regardless of people’s views of President Donald Trump, it can be made clear where he stands on the issue of defending America and taking care of U.S. citizens. Krikorian also mentioned he did not believe big-name Democrats, like billionaire donor George Soros, were behind the funding or organizing of the caravan because even they know it would hurt their party.

“The caravan is a godsend for Republican candidates. You know the idea that Soros or Chuck Schumer dreamed this up is nuts. Why would they do that? I mean they’re not idiots. Because even middle of the road people, even people who aren’t particularly hawkish on immigration, don’t think it’s right that thousands of people should be swarming across our borders,” Krikorian said.

Krikorian also mentioned the silence from Democrats on the issue, in particular, Texas Democratic senatorial candidate Beto O’Rourke and his campaign’s response to the migrant caravan to TheDCNF, which said “Beto does not yet have a statement about the migrant caravan. Stay tuned.”

“Somebody asked Beto too, and the campaign said ‘oh we don’t have we have any statement at this time.’ I mean that’s a brilliant idea because they fear this issue and that’s important information for voters to have because whatever you think of Trump, he’s loud, he’s a bore, he’s a jerk, frankly all that’s true. But, you know where he stands on defending America against thousands of people trying to swarm across the border. It’s not clear what the Democrats would do if 5000 people showed up at the El Paso port of entry,” Krikorian continued.

Matt Schlapp, chairman of the American Conservative Union, told TheDCNF that if someone organized the migrant caravan in an effort to hurt Trump, then the opposite is happening.

“You have to kind of wonder because you know the idea that fact that people got together on a corner Guatemala and decided ‘hey look I’ll leave the three o’clock on Tuesday and start walking together.’ You have to wonder who the people are who came up with this idea. What they were thinking? Because if they’re trying to hurt President Trump, obviously just the opposite is happening,” American Conservative Union chairman Matt Schlapp told TheDCNF.

“The southern border, over the course of the last 10 years, has demonstrated that our immigration system can be easily overcome by people who don’t have the best intentions and people who just want to flood it in order to take advantage of the situation,” Schlapp continued.

Democrats in key midterm races and battleground states have continued to remain silent about the migrant caravan of roughly 7,000 people from Central America traveling through Mexico toward the U.S. TheDCNF contacted the campaigns of 20 Democrats who are up for re-election in battleground states or in tight races, and only one other gave a response.

“In regards to the caravan, we have laws for people who come to the border seeking asylum, and Senator Warren believes that we should follow those laws. However, she also knows that we should never have been in this situation. The real problem is Donald Trump’s chaotic foreign policy and lack of a long-term strategy in the region,” Warren’s campaign said in the statement.

However, it’s not just Democratic candidates who are remaining silent. Large pro-immigration organizations such as the American Civil Liberties Union (ACLU), the American Bar Association’s Commission on Immigration (ABA), UnidosUS, and American Immigration Lawyers Association (AILA) all would not comment on the migrant caravan and its possible effect on the 2018 midterm elections when contacted by TheDCNF. The ACLU was the only group to respond to inquiries, but said they “do not have anyone” who would be able to talk about the issue.

Leslie Marshall, a Democratic political analyst and Fox News contributor, was the only other Democrat contacted, out of dozens, who would speak about the migrant caravan and its possible effect on the midterm elections.

“I actually do think it will impact the election and I honestly think that’s why the president is doing it. I mean he’s inflating numbers. He’s blaming George Soros for funding it, which is completely unfounded. And I think it actually will motivate voters on both sides of the aisle to come out. I think Democrats especially some of those border states, especially the Latino voters who you know may not plan to vote in the midterms, historically don’t always vote in the midterms,” Marshall said to TheDCNF.

“We Democrats are really bad at coming out for the midterm elections when you look at the numbers historically and I think it will motivate some on the right and Republicans who you know chant ‘build that wall’ and who believe that we’re being invaded and things like that. So I actually do think it impacts and I do think it will perhaps fan the flames of passion and emotion that seems very much so to be prompting some people that don’t normally come out in a midterm election to vote, to vote next week on November 6,” Marshall continued.

When asked why Democrats have been so silent about the migrant caravan, Marshall said she would like to see Democrats be more vocal about the issue, as Republicans have continued to push back. Marshall called it “a missed opportunity” saying Democrats should correct Republicans on some of their talking points.

“They have been vocal but they’re not as loud as the right is about the negativity about this crowd. And I think that me personally, I think that’s a missed opportunity to correct the wrong from the right, the rhetoric that we’re hearing about these people and it can be used in a sense,” she continued. “Maybe Democrats don’t want to use these people as a political pawn because that can backfire as well.”

The Nov. 6 midterm elections will be a big indicator as to how Trump’s messaging and support helps GOP candidates, as he has endorsed dozens of candidates across the U.S. and has held campaign rallies for many others throughout the last several months, making illegal immigration the center focus during many of his speeches.