Texas has several of the nation's most dynamic midterm election contests. The incumbent Dallas-area Congressman discusses his tight race and the issues at stake. 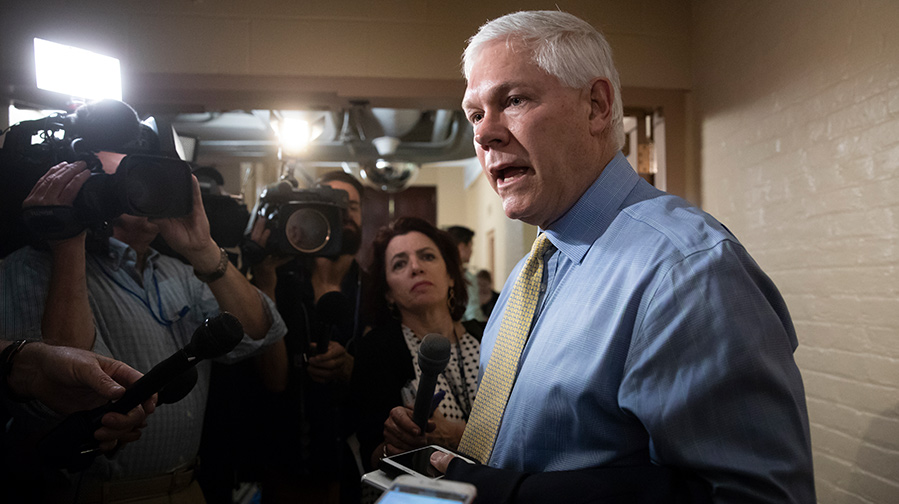 “Democrats have decided that Texas will really be a battlefield,” says Rep. Pete Sessions. “National donors are pouring $72 million into Beto O’Rourke’s campaign. It’s just an incredible amount of money, and the effect spills over into other Texas races.”

The Republican Sessions has represented Texas’s 32nd district, covering the north Dallas suburbs, since 2003. The latest polls show him a few points behind his Democratic rival, Dallas lawyer Colin Allred.

Sessions spoke with The Stream previously about how and why his health care plan covers pre-existing conditions. Now, in a phone interview, he gives his take on working across the aisle, the importance of faith and President Trump’s record so far. It has been lightly edited for clarity.

The Stream: How has Congress changed since President Trump came into office?

These were ill-prepared concepts designed to harm the free enterprise system. Government fought with every single industry: health care, energy, financial services, you name it. There was no cooperation with it, just like the takeover of student loans. That took from the free enterprise system and gave to government. At the same time, it substantially increased the debt load and responsibility of government. The ability to gain footing and jobs and fight against rules and regulations was diminished.

“Under President Obama, government fought with every single industry: health care, energy, financial services, you name it. There was no cooperation with [free enterprise].”

Under President Trump, we have the greatest economic outlook and boom in our lifetimes. His policies give employers a chance to hire more people that could have a career. This came as a result of lowering taxes and encouraging investment.

It is something we need to make permanent with Tax Reform 2.0. But the Democrats refuse. They even attempt to take credit themselves, after eight years of 1.2% GDP growth under President Obama.

You mention the national debt under President Obama, yet today it stands at $21 trillion, which is far higher. What would you say to critics?

Those people have not been educated on the facts of the case. The facts are, we have two sides to our spending measures. One is called mandatory, the other is discretionary.

The mandatory side is policy, oriented to law, not annual spending levels. If you qualify for Social Security, you can get it. It is supposedly a system that is self-sustaining, though we’re nearing the end of that ability.

The part that we budget for is the discretionary side. We held that flat starting in 2011 through 2017, through hundreds of votes. We sustained keeping us at the exact same 2009 spending levels. After this eight-year mark, we did increase military spending by agreement.

Our military got at least half of the funding increase. It means that the military, which has been in a very dangerous circumstance, will have an advantage of about $100 billion dollars as a result of this decision.

How have you sought to work on initiatives with Democratic members of Congress?

I have openly invited every member of the Rules Committee to come and learn about the health care plan I and others have put forward. It presents options for people, allowing people who are on Obamacare to stay there if desired.

If given any other competition of a free enterprise, market-based system that would provide the attributes of group policy, the Affordable Care Act would be rarely selected and ultimately unnecessary. Obamacare is not accepted as insurance by many children’s and cancer hospitals. Examples include Stanford University Medical Center, Sloan-Kettering Cancer Hospital and Children’s Hospital in Dallas, Texas. American families, workers and patients need to have an alternative, such as this plan.

“As Members of Congress, our policies under Obamacare are twice as expensive in deductibles as what we had paid being on regular government insurance.”

In testimony before the Rules Committee, Gene Green, a member of Congress from Texas, offered the same analysis that I have. Our policies under Obamacare are twice as expensive in deductibles as what we had paid being on regular government insurance. The costs of health care in our country are staggering.

Democrats seem to understand this. They err on the side of not even acknowledging our bill in comparison to Obamacare. They have moved to a dangerous perspective of Medicare For All. As you know, Medicare is a senior-driven plan not designed for children, teenagers or families. The Affordable Care Act is highly discriminatory, very expensive and does not work for people. Now the same people who sold us that are moving to Medicare For All.

How does your faith and involvement in the Methodist Church influence how you approach public policy?

I was raised in the Methodist Church. My faith and confidence rests in my Lord and Savior, Jesus Christ. It gives me a foundation of support to know that I, or anyone else who has faith, are not by ourselves. There is a Higher Being who is present in our daily lives.

If we as responsible individuals provide a balance in our lives, we can do more and better things for people. In government, we can put our mark of excellence on policies. It’s like being an Eagle Scout: we leave our campsite better than the way we found it.

In the Methodist Church, we try to be less bark and more wag. The church I call home, Highland Park Methodist Church in Dallas, is we believe one or two in the nation in terms of partnering with Habitat for Humanity in building new homes.

When Hurricane Katrina came, our church pledged one million dollars, one million hours of service and one million pounds of food. We are a service-driven organization that cares about people — not just in our community, but people in the U.S. who are seeking help.

Explore The Stream’s complete politics coverage, and sign up to receive top stories via e-mail every week.