‘Do Not Fear Forgiving’: Survivors of Persecution Speak at Religious Freedom Event

Advocates for persecuted believers spoke out this week to an audience of world leaders. They recounted violent attacks in Sri Lanka … and why they chose to forgive. 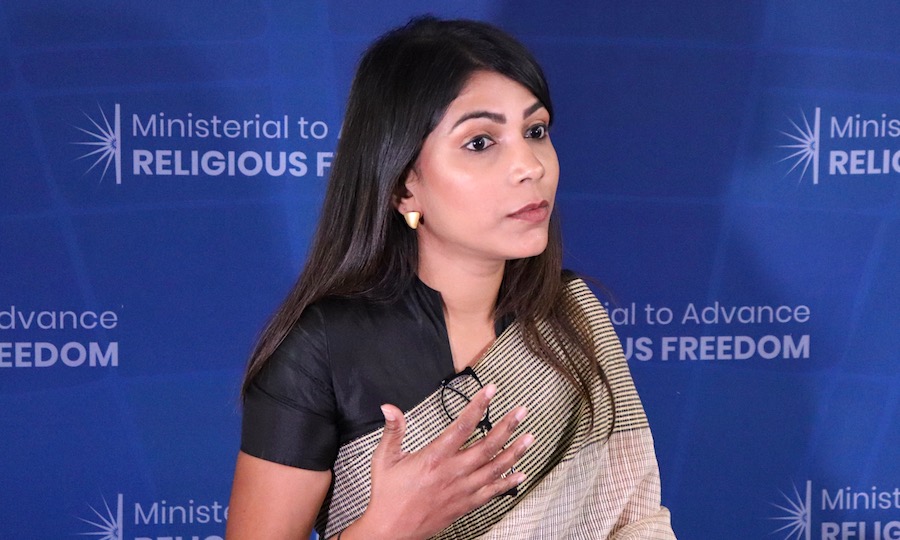 Here in the 21st century, one would hope to never hear of child martyrs. Recently, though, when speaking of Easter Sunday attacks in Sri Lanka, religious freedom attorney Yamini Ravindran alluded to this difficult truth about current-day persecution.

“On that fateful day, a Sunday school teacher questioned his [class],” she said. “He asked: ‘How many of you are willing to die for Jesus?’ Almost all of them raised their hands. A few minutes later, this became a reality for many of them. It’s tragic.”

More than 250 people died after terrorist attacks on April 21 targeted three prominent churches and three luxury hotels. In recounting the story firsthand, Ravindran was one of several religious freedom advocates elevated to a global audience.

On Tuesday, the U.S. State Department hosted an historic gathering of approximately 100 nations for the Ministerial to Advance Religious Freedom. Over 1,000 diplomats and nonprofit leaders attended sessions, highlighting the freedom to believe as a human right.

“This is the largest religious freedom event ever done in the world,” said Ambassador Sam Brownback. A former U.S. Senator from Kansas, he represents religious minorities through his State Department role. “A global human rights movement centered on religious freedom is being launched from this meeting.”

“With the Easter attacks, we have suffered as a nation,” said Ravindran. “The victims of this horrific incident are broken [and] in great pain. However, they are on the path to recovery because they have no hate in their hearts.

“Courageous people do not fear forgiving for the sake of peace.”

Ravindran serves as legal advocacy director for the National Christian Evangelical Alliance of Sri Lanka. The group represents over 200 churches and Christian groups in the nation. “Easter Sunday is supposed to be a day of celebration of the resurrection of Jesus Christ,” said Ravindran. “Little did we know that this Easter was going to be different. It [would] permanently change the lives of many.”

She told the story of a six year-old girl named Eliza. Her parents died following the bombing of Zion Church in Batticaloa, located in eastern Sri Lanka.

“This little girl has suffered very serious internal and external injuries,” recounted Ravindran. “In one brain surgery that she went through, one of her eyes had to be removed. In the other eye, she lost sight after the [explosion].”

The orphaned toddler has now been discharged from the hospital. Her grandmother is caring for Eliza, yet the traumatic loss looms over their daily lives.

Despite seeing these horrors firsthand, the religious freedom advocate emphasized forgiveness. She explained further in a briefing with reporters.

“A part of recovery happens when we forgive,” said Ravindran. “The Bible also talks about how important it is to forgive, irrespective of the times you are attacked or what you go through.

“To love your neighbor is the core principle and foundation of what we believe in.”

Brownback has long been known for articulating how Christian faith compels global humanitarian action. Some may find his message to diverse believers surprising.

“We need you to boldly fight for religious freedom,” said Brownback. “Join together to fight with those who profess different faiths.” Will Ford, who teaches at Christ for the Nations Institute in Dallas, Texas, attended the Ministerial.

He noted that the proliferation of Christianity has brought freedom of thought and expression worldwide.

“Religious freedom should be something that is fought for and supported by everyone,” said Ford. “God loves for people to be free. Without freedom, people won’t be able to explore, seek, and really go down the path God has for them.”

Ford paraphrased Polish leader Ján Figeľ, a religious freedom advocate in the European Union. The Christian co-author of The Dream King also addressed how evangelism plays into the equation.

“Indifference, fear, and ignorance are the greatest threats to valuing human dignity,” said Ford. “My job is to pray and be prepared with answers when people ask about the hope within.

“It should never be the agenda of any Christian to shut down or restrict people on the basis of what they want or don’t want to believe.”

“Some children have lost their parents, and some parents have lost all their children,” said Ravindran.

People of faith often perceive a higher purpose even from merciless suffering. Yet Ford notes that Christians need not hesitate when horrific actions necessitate a strong response.

“Righteousness and justice are the foundations of God’s throne,” said the professor. “At times, doing acts of justice means holding people accountable. Yet when we show dignity even to perpetrators, that’s one of the things that stops the cycle.”

Emphatic on the need for united strength against human rights violators, the Secretary of State backed up this perspective.

“Despite our many differences, everyone here agrees on the need for religious pluralism,” said Mike Pompeo in opening remarks. “All people from every place on the globe must be permitted to practice their faith openly – in their homes, in their places of worship, in the public square.”

The Ministerial to Advance Religious Freedom continues through Thursday.

Watch the video below to learn more about the National Christian Evangelical Alliance of Sri Lanka. Explore The Stream’s complete international coverage, and sign up to receive top stories every week.