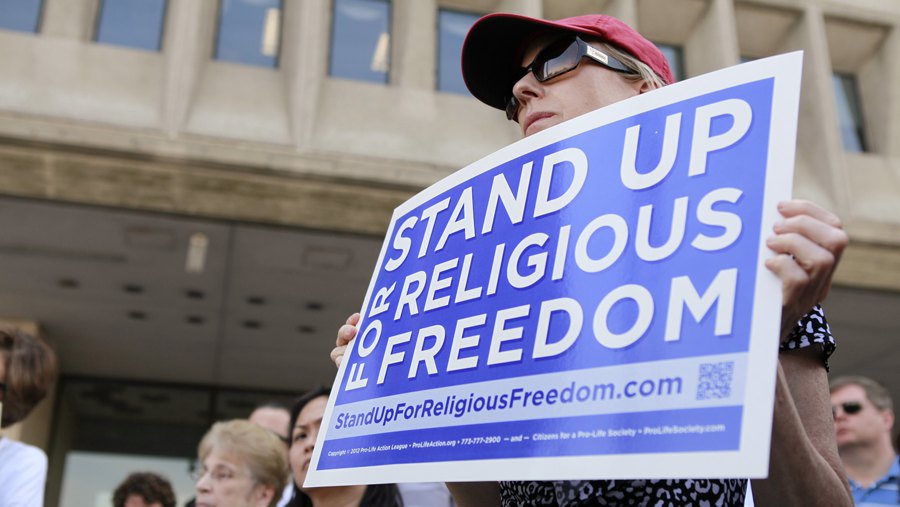 Since 1993, the United States has formally observed Religious Freedom Day on January 16. The day honors the nation’s first religious freedom law, the Virginia Statute for Religious Freedom, passed in 1786. Like other presidents before him, President Joe Biden released a proclamation acknowledging the day. Although the president’s comments on religious freedom were mostly encouraging, it is difficult to appreciate his rhetoric when many of his actions throughout the first year of his presidency have undermined the freedoms he claims to support.

Religious Freedom and Our National Identity

For example, following his inauguration on January 20, 2021, the new president issued an executive order that requires federal agencies to interpret federal laws that prohibit sex discrimination as also prohibiting discrimination based on sexual orientation or gender identity. In doing so, Biden expanded the holding of the problematic Bostock v. Clayton County U.S. Supreme Court decision far beyond its intended scope of employment discrimination.

On February 4, 2021, President Biden issued a memorandum on “Advancing the Human Rights of Lesbian, Gay, Bisexual, Transgender, Queer, and Intersex Persons Around the World.” This memorandum “reaffirms and supplements” an Obama administration executive order that sought to ensure “United States diplomacy and foreign assistance promote[s] and protect[s] the human rights of lesbian, gay, bisexual, and transgender persons everywhere.” What this really means is imposing the far Left’s human sexuality agenda onto other countries, including U.S. allies with laws upholding natural marriage and human sexuality. This is just one example of how instead of prioritizing religious freedom overseas, the Biden administration has given preference to radical LGBT policies.

Bostock and the Fair Housing Act

Another example is a U.S. Department of Housing and Urban Development (HUD) memorandum issued on February 11, 2021, which applied the Supreme Court’s Bostock decision to the administration and enforcement of the Fair Housing Act. The likely ramifications of this action could include HUD-funded shelters for battered women being mandated to allow biological men to be housed alongside women, where they may share private spaces such as sleeping quarters and bathrooms.

On February 14, 2021, President Biden issued an executive order dismantling the previous administration’s White House Faith and Opportunity Initiative, replacing it with the White House Office of Faith-Based and Neighborhood Partnerships. The accompanying fact sheet revealed that the office would function as an intersectional advancement of progressive policies — a shift away from preserving religious freedom and towards ensuring religious entities that want to work with the government do not operate according to their religious beliefs that are counter to the LGBT agenda.

On March 8, 2021, President Biden issued an executive order establishing a White House Gender Policy Council. The accompanying fact sheet states that the council will “aggressively protect” certain groups, including the LGBT community, in its endeavor to “advance equal rights and opportunities, regardless of gender or gender identity, in advancing domestic and foreign policy.” The removal of the scientific and biological parameters of sex will prevent this council from adequately protecting and addressing the needs of biological women.

The same day, President Biden issued another executive order declaring that “the Secretary of Education, in consultation with the Attorney General, shall review all existing regulations, orders, guidance documents, policies, and any other similar agency actions (collectively, agency actions)” to ensure they line up with the LGBT agenda.

On March 26, 2021, the Department of Justice (DOJ) issued a memorandum on the application of Bostock to Title IX of the Education Amendments of 1972, paving the way for schools’ mandatory acceptance of gender identity ideology. In addition, President Biden issued a statement on May 17 recognizing “International Day Against Homophobia, Transphobia, and Biphobia,” which celebrates the anniversary of the World Health Organization’s declassifying homosexuality as a mental disorder. He touted the administration’s work on the issue and called on Congress to pass the Equality Act, a bill that would erode the freedom of houses of worship, religious schools and students, and faith-based organizations.

When he was inaugurated last year, President Biden inherited a federal bureaucracy accustomed to defending religious freedom. Under the previous administration, America’s “first freedom” had been prioritized and actively protected. For example, the DOJ vigorously enforced laws that protected prayer and religious expression. The U.S. Department of Health and Human Services (HHS) launched a new Conscience and Religious Freedom Division within its Office of Civil Rights to enforce federal laws that protect conscience rights and religious freedom. The U.S. State Department hosted an annual ministerial highlighting religious freedom issues abroad. In other words, the Trump administration embraced policies that valued religious freedom and actively protected the rights of people of faith.

Unfortunately, the Biden administration has managed to undo or undermine many of these policies, relegating religious freedom to the backseat while pursuing radical policies couched in “anti-discrimination” language.

Less than a decade ago, President Barack Obama commemorated Religious Freedom Day by declaring, “individuals should be free to choose and live their faith based upon the persuasion of the mind — and of the heart and soul.” The idea of living out one’s faith means that one’s convictions apply to the whole of life. True religious freedom means someone should have the freedom to believe what they want in terms of doctrine and theology and have the freedom to order their life according to their deepest convictions.

Unfortunately, despite the pro-religious freedom rhetoric, the Biden administration is failing to protect these rights and is seemingly working overtime to roll back some of the hard-won protections secured by the previous administration.

David Closson is Director of the Center for Biblical Worldview at Family Research Council.