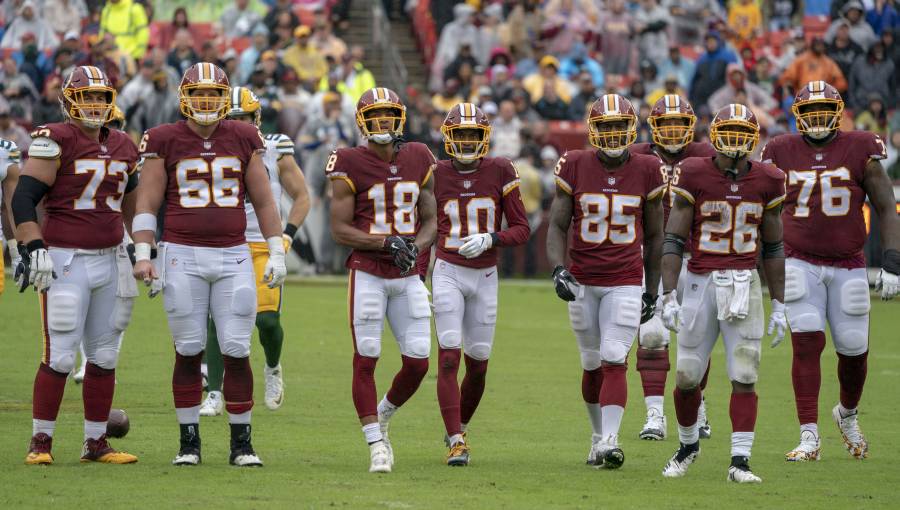 The 2018 Washington Redskins, when all they had to worry about was football.

Editor’s Note: The Washington Post story dropped this evening. 15 women are alleging sexual misconduct by former team employees. Owner Dan Snyder is not accused in this story. The WaPo story is currently behind a paywall. Here is an ESPN summary. First year coach Ron Rivera insisted the team culture will change going forward. “Biggest thing is that we have to move forward from this and make sure everybody understands we have policies that we will follow and that we have an open door policy with no retribution,” Rivera told ESPN. “Plus my daughter works for the team and I sure as h*** am not going to allow any of this!”

Perhaps it’s a sign we’re getting tired of the violent revolutionaries and the coronavirus. Just days ago, the Washington Redskins announced they are changing their name to ward off the woke mob (which included very few Native Americans). Now rumors abound that a huge bombshell is about to rock the team. And the NFL. The National’s Capital is in frenzied, obsessive anticipation.

The Washington Post is reportedly going to drop this bombshell Friday. Local and national sports reporters promise us a doozy. “Devastating.” “Sickening,” even. A former Redskins beat reporter posted on Twitter, “The warped and toxic culture of the Washington Football Team is about to be exposed in a sickening fashion … again.”

Schefter notes that within the past week front office members Richard Mann III and Alex Santos have left the team. Also longtime radio play-by-play voice Larry Michael suddenly announced his departure. He’s a longtime pal of owner Daniel Snyder. (Note: All three are accused of harassment in the Washington Post story.) For those who don’t follow the FormerSkins, head coach Jay Gruden got fired in the middle of last season. Longtime team president Bruce Allen was booted too.

What we also know is under Snyder, the once fabled franchise had crumbled into perpetual dysfunction. They’re Venezuela in shoulder pads. For example, just last year, perpetual all-pro left tackle Trent Williams revealed how team doctors had misdiagnosed a cancerous brain tumor for years. The tumor nearly killed him.

Most of the rumors involve assorted sleazy tales of sex and drugs. Those old enough to remember the book and movie North Dallas Forty have some idea. In that movie, based on author Peter Gent’s experiences as a wide receiver for the Dallas Cowboys, a squeaky clean coach rode herd on the players. Not here. The new rumors involve former coach Jay Gruden, too.

More serious rumors center on an allegations made by five former Redskins cheerleaders in 2018. They claimed they were “pimped out” to male sponsors and suite holders. The women told The New York Times the organization required some to pose topless in front of the men. It sent others out to nightclubs as personal escorts.  “They weren’t putting a gun to our heads,” one anonymous cheerleader said, “but it was mandatory for us to go.”

Most of the allegations center around a trip the squad took to Costa Rica in 2013 for a calendar shoot. The women say some of the 36 cheerleaders were required by cheer squad director Stephanie Jojokian to pose topless. Others donned nothing but bodypaint. And male sponsors and FedEx suite holders looked on. Jojokian then allegedly ordered nine of the women to accompany the men on dates. The cheerleaders believe team management “seemed to condone this.” Jojokian and the organization denied the charges, with Jokokian insisting the women chose to go with the men.

Another rumored “bombshell” is that Snyder bribed NFL refs. Now the FBI is investigating. That would be a huge scandal because it threatens the integrity of the game. However, ESPN’s Schefter says a source with the team “strongly denied” the allegation. The source also laughed and said, “if we did, we need to get our money back.”

In response to the wild internet speculation that members of Washington’s NFL team paid off officials, one source laughed, strongly denied it, and added “if we did, we need to get our money back.”

True enough, given the team’s fortunes the past 20 years. Of course, given Snyder’s abysmal habit of signing useless free agents for insane amounts of money, it’d be just like Snyder to pay off refs and get nothing in return. You think the Patriots would bribe an official and not get their money’s worth? No way. The FormerSkins? Would be par for the course.

What Would Be Amazing

The chaos around the team has team investors spooked. Schefter is reporting minority owners have hired an investment pro to vet buyers and to sell their stake in the team. Also, if it proves true Snyder tried bribing officials and condoned cheerleaders being “pimped out,” he could be forced to sell.

And every Washington fan will cheer.

But who could buy the team? As a longtime Redskins fan, I wonder. Wouldn’t it be fun if a Tribal Nation flush with casino cash bought the team? And proudly renamed it the Redskins? Don’t laugh. It’s 2020. Stranger things have happened.

The Redskins are Officially No More

Kids: Be a Mara, Not a Snyder