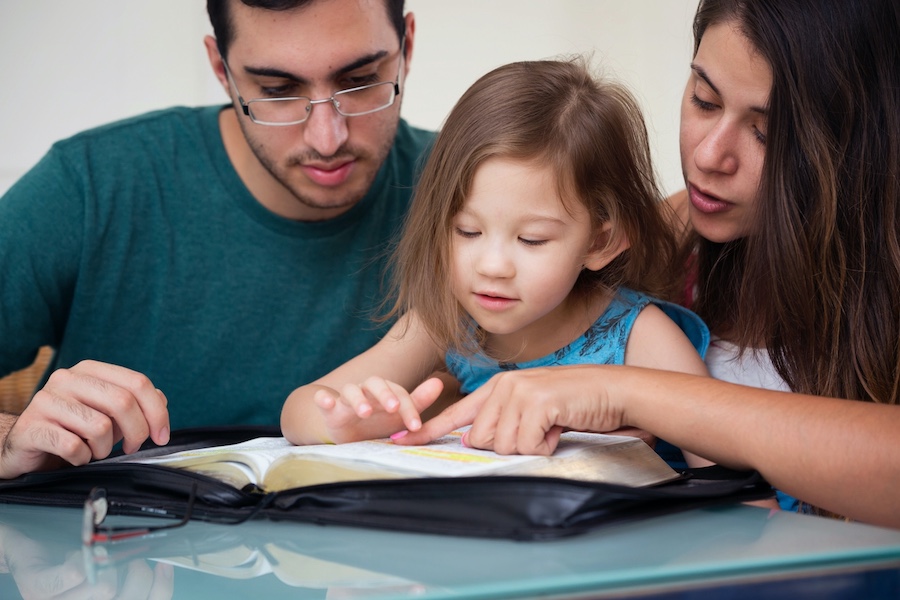 It came from the “woke” author of a “faith”-based book on parenting: the admonitions, “Do not evangelize a child. Do not colonize a child’s spirituality. … Your religion does not have a right to stake claim to a child’s allegiance.” The author is one of many progressive-minded people complaining about parents who “subject” their children to “religious indoctrination.”

It’s all directed toward Christians, of course, since the progressive code of conduct forbids applying the same complaint (publicly at least) to Hindus, Buddhists or Muslims.

These self-appointed cultural gatekeepers are highly suspicious of (if not openly hostile toward) what the Church refers to as “discipling” people, including kids. They’re irked over the existence of private Christian schools. Homeschooling is abhorrent to them. They agree with Richard Dawkins, who once wrote that teaching kids religion constitutes child abuse — in spite of facts showing otherwise.

Are these concerns justified?

Every Parent Does Indoctrination, and Much of it is Religious

The word “indoctrination” has acquired a sinister aura. No one does it but all-powerful regimes and dangerous cults, right? Not exactly. Originally the word had no negative connotation. It just meant to teach someone things. And everyone does this. Everyone “indoctrinates” in this sense.

That’s no longer how we use the word. Still, the point is what’s being taught, not the act of teaching. It’s the content — the “doctrine” — that is the issue.

So think of a Christian family, attending their church, homeschooling their kids, raising them in the faith. How are they any different from a Sunni Muslim household or a Sikh family doing the same thing? Are they different, for that matter, from secular, progressive parents, who no doubt “indoctrinate” their kids into their own beliefs at home? Who also monitor what they learn in school?

You may say the secular parents and school provide non-religious instruction. You might think that is the relevant difference. But is the secular teaching really non-religious? Don’t secular parents teach children about life’s meaning and purpose? Do they never address questions about evil? Don’t they impart some moral theory as they raise their kids to understand right and wrong?

Kids, being curious, naturally ask questions that are undeniably religious in nature. They want to know where everything came from, and why it was brought about. They want to know what happens when we die. How can secular parents’ “non-religious” education navigate all this without actually teaching something — something they intend their children to accept and to learn?

One way or another, their so-called non-religious upbringing will actually be religious where it counts. It may not include prayers, Bible verses, or church attendance. But it will include answers to these religious questions, even if in the most shoddy, haphazard and incoherent way. Secularist parents will bequeath to their children a worldview, complete with their perspective on life’s big (and yes, religious) questions.

And even if they were to avoid these questions, they’d be teaching something anyway. The message would be that there’s no real answer to any of these questions, or that it’s all up for grabs, or that their kids’ guess is just as good as theirs. Kids will imbibe these as beliefs, too, and count them as “truth,” just as surely as Christians’ kids may accept the gospel as truth. No parents can avoid indoctrinating, no matter how hard they try.

Why Should Strictly Non-Religious Education be a Goal Anyway?

So if every parent indoctrinates, maybe the problem is that some teach certain religious beliefs overtly. Maybe a secular education really is better.

But let’s look at how that has worked when tried out on a massive scale. Consider the 20th Century’s atheistic governments in Russia, China, Cambodia, and so on. You could go back to the 18th century and throw in the French Revolution for good measure. All of them forced non-religious — or even anti-religious — instruction on their people. All were also guilty of some of the worst human atrocities in history.

Of course, they were simply replacing traditional religion with a new one of their own making. They could claim secular ideals like reason, liberty, equality, or evolution, but this kind of statism simply makes the State into the Church. Politicians giving speeches become preachers at their pulpits, filling a religious void with systematic statist doctrines. If they take comfort in their teaching being officially “non-religious,” they do so foolishly.

Indoctrination, in the broad and original sense, is simply education, the teaching of particular truths (“doctrines”). A systematic process of this kind will inevitably touch on universal and ultimate questions, thus making such a program of education religious to that extent. This is normal and to be expected.

To vilify so-called “religious indoctrination” is to the miss the point, especially if the scorn is aimed at typical Christian schools, churches and families. It is merely slander.

What deserves scrutiny and criticism isn’t the act of teaching kids religious doctrines. It is the teachings themselves. If Christians teach their kids things that are abusive or dangerously false, then by all means, let critics say so. Let them make a case for what’s so egregiously wrong with the doctrines. But they should be prepared to face equal scrutiny for the beliefs they prescribe for their kids. And not only for their kids, but perhaps ours as well, in the case of public schools. Call it what you like, we all pass on to the next generation the doctrines we think they should learn and believe.

Let’s quit treating it like a bad word. All parents indoctrinate. All parents teach. It’s the content that makes the difference, not the process.

Clint Roberts has spent many years teaching courses in philosophy, ethics and religion for various universities, including the University of Oklahoma and Southern Nazarene University. When not doing that, he can be found sermonizing, playing stringed instruments or roasting chiles and/or coffee beans. He also participates in a podcast that explores the most fascinating theological questions.