Black History Month is a time to reflect on the great achievements of African-Americans and black Africans, while also confronting the sordid history of racism. The purpose of such reflection, of course, is to combat vestiges of racism in our society, so that we can properly love our neighbor, regardless of their race or ethnicity.

Indeed, scholars today are cranking out multitudes of books exposing the racism in our society. Three prominent examples from 2021 — published by academic presses — are Anthea Butler, White Evangelical Racism, Randall Balmer, Bad Faith: Race and the Rise of the Religious Right, and J. Russell Hawkins, The Bible Told Them So: How Southern Evangelicals Fought to Preserve White Supremacy. One can hear a similar refrain on NPR: for example, in the July 2020 report, “White Supremacist Ideas Have Historical Roots in U.S. Christianity” or in many reports during 2021 warning about white supremacism inherent in “Christian nationalism.”

While it is salutary to examine and expose the religious roots of racism, one might get the mistaken impression from this discourse that today’s white nationalists are direct heirs of the Ku Klux Klan, who did indeed (mis)use religion to promote their racist ideology.

The Real Roots of Racism: Pseudo-Science

What often seems neglected in this discussion is the history of scientific racism, which was in some ways more virulent than most religious forms of racism. This is not to say that historians have completely ignored scientific racism. Indeed, I have contributed to this scholarly discussion in some of my earlier works, as well as in my newly released book, Darwinian Racism: How Darwinism Influenced Hitler, Nazism, and White Nationalism.

However, it seems that the way scientific racism is presented differs substantially from the way religious racism is treated. Many scholarly works and NPR stories on religious racism assume that religion — especially evangelical Christianity — is still heavily tainted by racism. Indeed, an op-ed in Scientific American in 2021, “Denial of Evolution Is a Form of White Supremacy,” overtly slammed creationists as white supremacists, completely ignoring the fact that Ken Ham, a leader among young-earth creationists, co-authored a book (with an African American), in which he vigorously opposes racism.

Most works on scientific racism admit that scientists erred in the past by promoting racist ideas, but then the historians celebrate the triumph of science, since later scientists overcame these misguided ideas. Of course, most scientists today — just as most religious leaders today — do reject racism. One of the outliers — Nobel-Prize-winning biologist James Watson — is often condemned by colleagues when he makes racist statements.

The Eugenicist in the Room

So, if the vast majority of scientists reject racism, one might conclude that scientific racism is no longer a problem. Maybe religious racism really is a more important target. However, this conclusion ignores the elephant in the room.

What elephant? Well, how about examining the white nationalist scene today to see what they actually believe? How do they justify their racist ideology? While researching my book, Darwinian Racism, I examined the websites and publications of many neo-Nazi, white nationalist, and alt-right individuals and organizations. What I discovered was that most white nationalists and white supremacists today embrace a social Darwinist version of scientific racism and vehemently oppose Christianity. 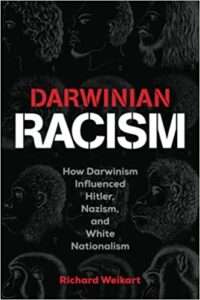 One of the most virulent pieces of social Darwinist racism I have ever read is the 1896 book Might Is Right by Ragnar Redbeard (pseudonym), which is currently popular among white supremacists. Indeed, in 2019, shortly before a nineteen-year-old gunman at the Gilroy Garlic Festival killed three and wounded seventeen, he recommended on social media that people read Redbeard’s book.

Many white nationalist websites recommend this book, and some even sell it. The subtitle of Redbeard’s book is Survival of the Fittest, and it is laced with Darwinian themes, such as the inescapable necessity of a struggle for existence between races. In addition to demeaning non-white races, Redbeard’s book also vociferously attacks Christianity.

The Survival of the Fittest … Race

Those doing battle against the religious roots of racism do often uncover vestiges of racism and this can be helpful. However, sometimes they seem to be letting the most flagrant proponents of racism off the hook. Could it be that they are uncomfortable recognizing that most white nationalists today are thoroughly secular and are inspired by Darwinism and science, rather than religion?