He shocked Hollywood when he left Nickelodeon after 20 years. Now the award-winning creator of The Fairly Oddparents is launching a network that will be an oasis in the barren landscape of today’s entertainment. 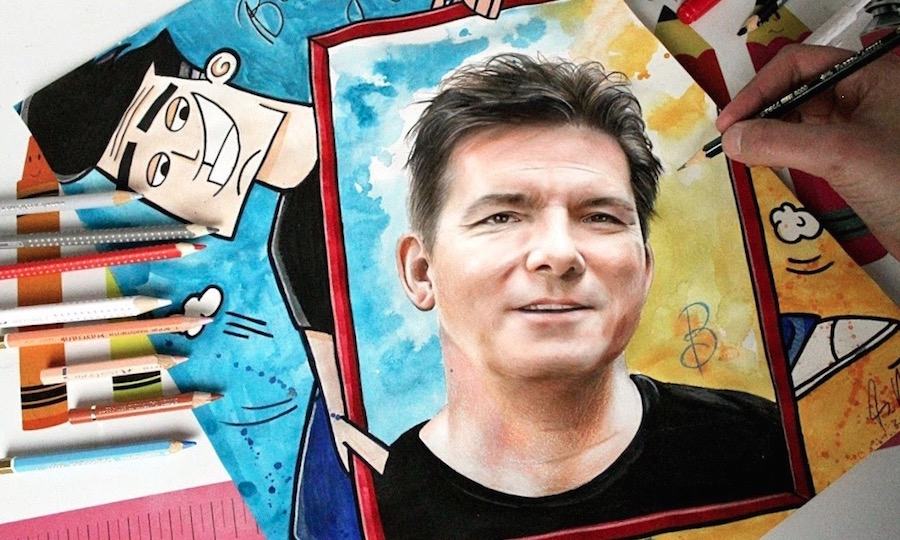 After 32 years working in Hollywood, veteran animator and TV producer Butch Hartman is launching a new network for shows the whole family can enjoy together.

The cleverly produced “Why I Left Nick” soon gained nearly six million views. It’s a rarity for a 14-minute video essay. The longtime Nickelodeon showrunner and father of two girls sprinkled in Scripture references as he broke the news of his departure from the #1 kids TV network.

“If you’re thinking you want to get into this industry, it’s awesome,” he says to his young viewers. “But it is very difficult. … You have to really step up when given that chance. There’s another scripture in the Bible that says, ‘To whom much is given, much is required.’ When you’re given a lot, it’s going to require a lot out of you.”

Hartman now has several new projects in the works, in addition to his growing YouTube audience. He’s set to produce several shows as a core leader of the new Pocket.watch platform. He’s been experimenting with mobile app development.

What animates Hartman the most is an on-demand network called Oaxis — a play on the words oasis and axis. In a Kickstarter launch video, he says it “has high-quality, family-friendly entertainment as its central mission.”

In a phone interview from Los Angeles, Hartman shares highlights from his decades at Nick… and how he’s seeking to change family entertainment as we know it.

The Stream: What were some of your biggest highlights from your time with Nickelodeon?

Butch Hartman: Twenty years is a lifetime — there were so many highlights! The Fairly Oddparents ran for 17 years nonstop and became one of the biggest cartoons of all time.

I love when kids quote lines from our shows. I love seeing toys made from characters we created. We also made three live-action TV movies for The Fairly Oddparents. Those were a blast, and I got some live-action experience out of that.

Seeing our creations turned into amusement park rides is really fun. The Fairly Oddparents Ride was briefly at Universal, Nickelodeon Florida and then at the Mall of America in Minnesota.

The Stream: How would you compare your shows with others being produced today?

Hartman: Our shows The Fairly Oddparents, Danny Phantom, T.U.F.F. Puppy and Bunsen is a Beast have been family-focused. What sets them apart is that I’m a Christian guy. Now you wouldn’t hear the word “Jesus” on these shows, because they never would have made them that way.

These shows were a platform to explore eternal truths. What do love, family, relationship and things like that really mean? We showed those ideas lived out. If you get even one Christian reference in there, that’s a good thing.

“We showed those ideas lived out.”

Some have criticized Danny Phantom because they say, “He’s fighting ghosts! How can you do that as a Christian?” He’s not necessarily fighting ghosts; he’s a light coming into the darkness. Danny is a hero who enters a situation and fights the bad things away. Then people say, “Oh, I get it now.”

For some reason, Christians think every subject is taboo. It’s really not that way. We need to take these subjects and put a positive spin on them where we can.

Shows That Bring Families Together

The Stream: You announced your departure from Nickelodeon in February. Why now?

Hartman: I believe we go from glory to glory, and it was just time to go to the next glory. I had been at Nick for 20 years. I was given the chance to do a few things, but I always wanted to do more there.

To be quite honest with you, God was calling me to something that was a higher situation. Fifteen years ago, it was prophesied over my wife and I that we would have our own network. Back then, we thought there was no way it would happen. We didn’t know how to do it and I was at Nickelodeon. It was not the time.

The Scriptures tell us that God will give you the desires of your heart. As the years went by, this network idea really germinated in my heart. I’ve always wanted to impact culture in a big way. God has been calling me to do this because that way he can work through me, without anyone else bogging it down.

The Stream: What is the vision for this new platform called Oaxis?

“The vision for Oaxis is to be a place where people can go and not have to hide their kids’ eyes every five minutes.”

Our society is more disconnected than ever. What if families could sit on the couch together and enjoy a good show, without having to separate and all watch their own thing? The vision for Oaxis is to be a place where people can go and not have to hide their kids’ eyes every five minutes.

It grieves me that good shows are so hard to find. There is some family entertainment out there, but it’s hidden in a minefield of negative stuff. You search for hours trying to find something the whole family can watch. By the time you do, everyone has gone their own way.

There’s such an outcry right now from parents. They can’t find anything for themselves to watch, much less their kids. With Oaxis, we will provide a place to go where the whole family has something to watch — and they enjoy it.

The Stream: Networks like UP TV, Nickelodeon and Discovery Family are having some success. Others like LightWorkers are emerging online. How will Oaxis be different from these other players?

Hartman: Oaxis is going to be 100 percent family-focused. We are all about bringing families back together.

Why do we have to have a show about a kid who commits suicide? Why can’t we have shows about kids who help stop their peers from committing suicide? When we show people positive role models of families and being a friend, audiences might be surprised and intrigued.

I believe other networks like Up and LightWorkers are faith-based. Oaxis will be unique in that it is a network run by Christian people, but not faith-based in content. Christian values will be all the way through it; we’re just not going to say the word “Jesus” in our shows.

The reason why is because a Christian network will only get the Christians, rather than anyone else. This network has to reach everybody. God bless the people who do Christian networks, that’s great. But we don’t want to limit the audience.

The Stream: Why is producing family entertainment such a passion for you?

Hartman: Growing up, I had a very chaotic childhood. But I loved reading comic books as a kid, and I grew up watching The Wonderful World of Disney, Sesame Street and Hanna-Barbera cartoons.

“I would never put entertainment in front of family time.”

As crazy as things were in my house, I could look at positive role models in these stories. The family entertainment really got me through it. It gave me hope that, OK, my family can be this way one day — rather than the difficult stuff we faced.

I wanted to have a family that loves each other and stayed together even when things aren’t going well. Those shows helped model what a good family should be.

The Stream: Imagine you encountered parents of elementary school-age kids who want to set better boundaries on their family’s entertainment intake. What advice would you give them?

Hartman: You want to spend family time together, that’s number one. I would never put entertainment in front of family time.

Teach kids how to be creative. When I was younger, I loved stand-up comedians. They were funny guys who would actually write clever jokes. Nowadays, everybody is going for the shock value with swearing and curses every other word.

If you’re going to make part of your family time pursuing some entertainment, make it something healthy everybody loves to watch. It’s why we’re launching this family-focused network. Oaxis is going to be the apple in a refrigerator full of junk food.

Learn more about Oaxis Entertainment, including how to be a part of the crowdfunding campaign.