As we work towards a post-Roe America, our nation’s pro-life youth are saving babies, weathering campus harassment, and actively ushering in a pro-life future. 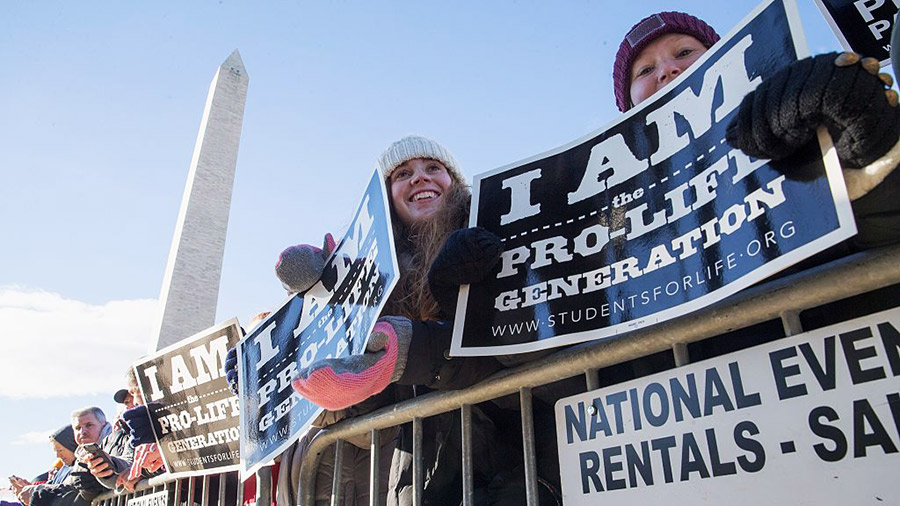 An abortion case out of Mississippi called Dobbs v. Jackson Women’s Health is awaiting its day at the Supreme Court. It promises to challenge the Court’s made-up enshrinement of first trimester abortion as an untouchable “right.” In short, the case deals with states’ abilities to limit pre-viability abortions … something Roe v. Wade does not allow.

This case, along with Texas’s Heartbeat Act, has sent abortion supporters into a belligerent spiral. And pro-life students are feeling the heat. Campus vandalism, harassment (both online and in-person), and discrimination towards Students for Life groups is rampant. Yet, in the midst of it all, pro-life students are carrying on and changing our culture for LIFE.

Students for Life Knocked on an Abortionist’s Door

Our mission at Students for Life of America is to abolish abortion. That mission drives every single thing we do. But it’s not just a tagline or gimmick; we are literally working to make our nation 100% abortion free. That core mission is the driving force behind our brand-new Campaign for Abortion Free Cities.

As part of the Campaign, pro-life students and community members in 20 different target cities nationwide engage in a variety of efforts to change hearts and minds about abortion as well as directly reduce the abortion rate.

During the Campaign’s first official weekend, door knockers in California reported, “We spoke with two medical doctors at a door and their friend (who may also have been a doctor). The conversation was very long, but it led to important topics. The craziest part is that we learned that one of the doctors helped with abortions. One noted that he would not personally advocate for abortion in a relationship, but when we asked why, he didn’t know.”

The state of affairs at Catholic and Christian schools would likely shock anyone who graduated from such a school more than a few years ago. They are no longer safe havens for students who reject abortion violence. When Students for Life at Gonzaga did a pro-life display this week, pro-abortion students on the Catholic campus protested in full force, pitching a fit of epic proportions.

SFLA’s Karlie Lodjic, who was assisting the Gonzaga students with the display, reports:

Just after noon, like clockwork, a group of students formed, claiming the display was making a lot of people uncomfortable (as abortion should), and we had a protest on our hands. To add insult to injury, pro-choicers on Gonzaga’s campus are now encouraging students to file harassment reports against the Zags for Life group because of the display.

To top it off, unknown but presumably pro-abortion vandals toilet-papered the home of the president of Gonzaga’s Students for Life group. This may classify under school regulations as a viewpoint-driven hate crime.

Kristen Marie Wayne, a junior at the University of South Florida and leader of USF Students for Life, currently has the incredible opportunity to help a mother choose life and walk with her through the journey.

Earlier this semester, after USF’s first Students for Life meeting of the year, Kristen stopped by a Publix grocery store. Outside the entrance of the grocery store was a beautiful pregnant woman named Shanika asking shoppers for money and food.

After a conversation, Kristen learned that Shanika wasn’t sure what she planned to do about her pregnancy. Fortunately, Kristen had a surplus of helpful Students for Life resources on hand, which Shanika was overjoyed to receive.

Since first meeting Shanika outside of the grocery store, USF Students for Life has thrown a baby shower for her, raised over $400, and helped her apply to live at a maternity home that provides housing, food, childcare, and education for two years – all free of charge. They will even provide her enough practical knowledge to get a good job when she leaves.

The pro-life students at St. Louis University (SLU) have been weathering some serious hatred from pro-choice peers this semester. Despite the school’s Catholic heritage, abortion-supporting students are doing their best to bully the Students for Life group into silence. Pro-choice trolls made look-a-like Instagram accounts masquerading as the real Students for Life group and instructed every pro-choice student at the school to publicly call out anyone they knew to be pro-life in the middle of class. They even posted on their story a list of pro-life students’ handles.

The Students for Life group at Central Michigan University went out to chalk loving life-affirming messages on their campus sidewalks. They weren’t expecting some of the harsh reactions they got from passersby. In the midst of writing, “Pro-Life is Pro-Love,” “Women Deserve Better than Abortion,” “Join the Movement to End the Violence of Abortion,” “Women’s Rights Begin in the Womb,” and other messages, a student leader of the group reported vandalism and harassment.

“We only chalked for an hour, but, during this time, students on bikes dumped water bottles onto our chalk while individuals on foot scuffed their heels in an attempt to smear our words,” a pro-life student shared. “’Hey! You with the chalk! Keep your stupid —– opinions to yourself!’ a male passerby snarled and spit on the pavement, missing my hand by inches. I looked up in shock only to see him walk away, laughing with his friend.”

Mere hours after the chalking event, not one life-affirming message remained untouched. Each was vandalized with pro-abortion and hateful messaging by other students.

More than one year after being arrested in Washington D.C. for attempting to chalk pro-life messages on a public sidewalk, the criminal charges have been dropped against two SFLA students. See this Breitbart video exposing how pro-life students with chalk were treated compared to Black Lives Matter activists in Washington D.C. in the same timeframe.

is celebrating as finally two students are cleared of any penalties for the unlikely ‘crime’ of trying to chalk BLACK PREBORN LIVES MATTER in the nation’s capital. At a moment in time when across the country people were talking about issues impacting the Black community, Students for Life and the Frederick Douglass Foundation joined together to speak for the preborn, only to be told that our speech was not welcome and was even criminal.