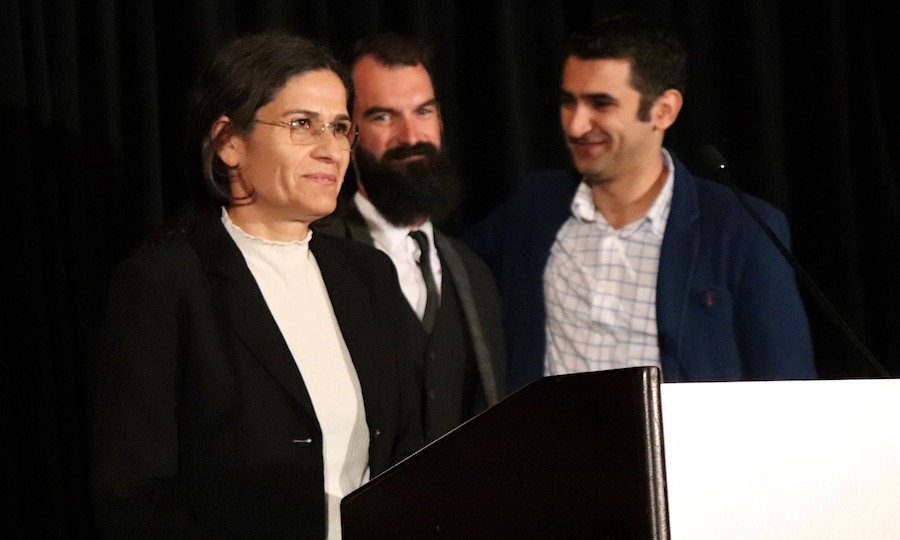 On October 27, 2019, Ilham Ahmed, president of the Syrian Democratic Council, addressed a gathering entitled ‘Pray For The Kurds’ held at the Grand Hyatt Washington. Dalton Thomas of Frontier Alliance International (center) and an unidentified translator stand behind her.

On Sunday night, nearly 20 million Americans tuned in to Game 5 of the World Series. With even President Trump cheering them on live at Nationals Park, the Washington Nationals lost 7-1 to the Houston Astros. It sets up the next game as decisive for the series.

Simultaneously, an event two miles away garnered less attention despite its significance. Approximately 700 people, a majority evangelical Christians, convened in the basement ballroom of a downtown hotel for a gathering entitled ‘Pray For The Kurds.’

They recognized that recent moves by the U.S. leave the coming months as critical for the fate of the Kurdish people. An estimated 180,000 people, mostly Kurds, have been displaced in the past two weeks since Turkey invaded Syria.

“We’re making intercession because much of the American public today does not know and does not care,” said Dalton Thomas of Frontier Alliance International (FAI), a Christian relief group. “But I want to rejoice. Because in the last few weeks, the world has become fixated on the Kurds.”

“We have gone through many fights… we see your support as a source of strength.” — Ilham Ahmed, president of Syrian Democratic Council

Organizers faced some critics, especially after Trump International Hotel cancelled their reservation for the gathering. Nearby Grand Hyatt Washington proved a comparable location.

Rather than amplify controversy, Thomas sought solutions in advocacy more spiritual than political.

“Part of what we’re asking for tonight is: God, that you would not waste one ounce of Kurdish suffering,” he said. “That you would flip the script. What was intended for evil, you would use for good.”

No Longer A ‘Safe Zone’

“We have gone through many difficult fights over the past eight years,” said Ahmed through a translator. “We definitely see your support as a source of strength for us.”

She continued: “We believe that, in the war fronts against ISIS and other extremists, we are not going to lose the fight. We know that the American people are with us.”

Thomas noted in his introduction the honor of Ahmed’s inclusion on the program.

“She is responsible for everything in what was the ‘safe zone,’ which is no longer a safe zone,” he said. “She is a public enemy of certain authorities [yet] we stand with her. After the Kurds broke the back of the Islamic State in Kobanî, we owe them a massive debt of gratitude.”

Other speakers included human rights advocate Diliman Abdulkader, popular historian Stephen Mansfield, and author Joel Richardson. Since 2012, he has partnered with FAI in their missions to Iraq, Syria, and the region.

“It’s essential that we do what’s right,” said Richardson in an interview. “This was a night of prayer and standing in solidarity with the Kurds, not a political protest. But as a staunch conservative who voted for President Trump, I am deeply disappointed in his recent policy changes.”

He said one question sums up their hopes and prayers. “Will this administration come to its senses and recognize that the Kurdish people are our most natural ally and friend in the region?”

Many attendees were still processing the news announced Sunday morning: ISIS leader Abu Bakr al-Baghdadi had been brought to justice. The terrorist was responsible for taking tens of thousands of innocent lives.

Ahmed briefly noted the involvement of Kurdish forces in the secret mission. “With a strong coordination from U.S. forces, we killed the ISIS leader al-Baghdadi,” she said. “In the fight against ISIS, we have had 11,000 martyrs so far and 25,000 Kurds have been injured.” Richardson, who often travels throughout the Mideast, considered the terrorist’s death more a symbolic than substantive victory. But he did offer insights on recent events.

“Today, the Kurdish people all feel betrayed by the U.S.,” he said. “Nevertheless, they assisted the U.S. with intelligence to bring this about. Have we even acknowledged and thanked them for their assistance? Some statements in the past couple weeks have maligned the Kurds.”

He called it “ridiculous” how some tweets from President Trump linked the Kurds with ISIS. In a recent press conference, President Trump dismissed reports that Turkey’s invasion of Syria has resulted in a death toll now nearing 500.

“There’s a lot of sand they can play with,” said Trump of the Kurdish people. “Let them fight their own wars.”

An advisor with nonprofit group Freedom to Believe, Diliman Abdulkader responded to the popular notion that U.S. Armed Forces have been spread thin by involvement in Syria.

“The Kurds are not asking Americans to fight for them,” said Abdulkader. “We’re simply asking the U.S. to raise its flag, which itself keeps away these adversaries and jihadists from states like Turkey and Iran.

“America has to understand that, with economic and military might, comes responsibility.”

Prayers of Grief and Unity

On stage, most speakers avoided explicit political discussion in favor of unifying themes.

“In light of what’s happening, we’re grieving over it and we’re standing on behalf of our friends the Kurds tonight,” said Thomas. “God loves the Kurds, and He loves the Kurds’ neighbors as well. And He hears our voices when we pray.”

Author of The Miracle of the Kurds, Stephen Mansfield shared about the century-plus of broken U.S. promises to the Kurdish people.

His public prayer reflected grief and solidarity. “Father, we ask you to look upon the souls of the Kurds in this room and worldwide,” he said. “We pray that whatever is coming now, in your sovereign choices… may we be bold for righteousness, for covenant-keeping, and for doing your will in our generation.”

Yet the grief of this ancient people at their allies’ recent betrayal permeated the gathering.

“God loves the Kurds, and He hears our voices when we pray.” — Dalton Thomas

“The Kurds are a peaceful people, not extremists,” said Abdulkader. “Do we want ethnic and religious minorities — and their holy sites — to be protected? Do we want women to be empowered? Do we want stable regions for refugees to feel at home? This is what the Kurds have been doing.”

For her part, Ilham Ahmed hoped the ecumenical event would result in tangible actions.

“Our region is facing a grave danger,” she said. “Historic massacre will be perpetrated against us. By pressuring your government, you can [stop] it. I love you. We hope that we will greatly succeed.”

Watch the full event below. Explore The Stream’s complete Syria coverage, and sign up to receive top stories every week.