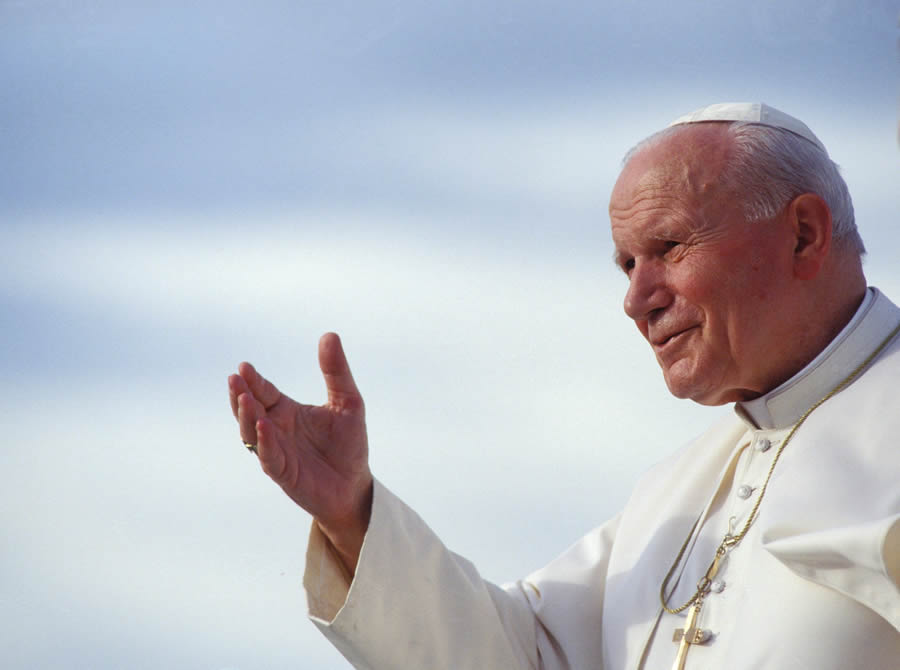 Catholics hold that all Revelation needful for salvation ended with the death of St. John the Apostle. The Church can and often does veto false apparitions and fake miracles. It has a long, arduous process for deeming whether the faithful are free to believe in so-called “private revelations,” such as the miracles at Fatima. So we should always approach such claims with caution and discernment.

That said, check out the recent report from LifeSiteNews. It cites and translates a report from an Italian newspaper, La Nuova Bussola Quotidiana:

A close friend of Saint John Paul II has affirmed that the late pope, revealed to have been a mystic, told him that Europe would be invaded by Islam.

Speaking to a large group at the hermitage of “Saints Peter and Paul” this past October, Monsignor Mauro Longhi of the Opus Dei prelature recounted a conversation he had with the late pontiff in March of 1993 on one of their many hiking trips in the mountains. Having got ahead of the rest of their companions, Longhi and St. John Paul took a sandwich break.

In video footage of the October talk, Longhi is heard saying that he noticed that the saint’s hands were trembling. (John Paul’s Parkinson’s disease had not yet been revealed in 1993.) The pope noticed the then-young man’s gaze.

Longhi jumped in to say, “But, no, Holiness, you are young.”

Longhi continued: “Then Wojtyla changed tone, and making me privy to one of his night-time visions, told me:

“‘Tell this to those whom you will meet in the Church of the third millennium. I see the Church afflicted by a deadly scourge. Deeper, more painful and more deadly than those of this millennium’, referring to … communism and Nazi totalitarianism. ‘It’s called islamism. They will invade Europe. I saw the hordes coming from the West to the East’, and he described to me the countries one by one: from Morocco to Libya to Egypt, and so on to the eastern parts. The Holy Father added, ‘They will invade Europe, Europe will be like a cellar, old relics, shadowy, cobwebs. Family heirlooms. You, the Church of the third millennium, will have to contain the invasion. Not with armies, armies will not suffice, but with your faith, lived with integrity.’ ”

A Prophecy? Or a Cold-Blooded Insight?

Was this a vision from God? I don’t know, and the Church will probably never speak on the subject. On the positive side, John Paul II was a genuine saint, and a deeply prayerful man. Nor was he particularly biased against Muslims. As LifeSiteNews points out, the pope caught widespread flack for kissing a Quran on a trip to a Muslim country. Nor did most Europeans have any reason to fear a Muslim influx into the rich, newly post-Cold War Europe. The only major enclaves of Muslims were in Bosnia and Albania. And the Bosnians were being persecuted by post-Communist Serbs. For those reasons, the pope’s prediction seems like a piece of hard-to-explain prophetic insight into the events of today.

Or it might have simply been the poetic imagination of an old, but highly perceptive man painting vividly the forces that would blight our future. John Paul had seen keenly before. Great anti-Communists like Whittaker Chambers had warned that the Soviet empire seemed likely to triumph. The overwhelming scholarly consensus was that Communism would loom over us for centuries. In my college years in the early 1980s, professors dismissed Ronald Reagan’s predictions that the Soviet Union would someday crumble as crackpot fantasies. But John Paul II saw through that, and found reason for hope. A few years later, perhaps he saw even further, and found reasons for fear.

And some other men saw the hidden threat that the torpid, poverty-stuck Muslim world still posed. Hillaire Belloc famously predicted in the 1920s that Islam was the next great danger to the West. He said this when most Muslim regions on earth were still Western colonies! The great anti-Nazi social philosopher and economist, Wilhelm Röpke, called Communism “pseudo-Islam.” He saw that both systems were quasi-religious political and militaristic movements that sought world domination. In The Camp of the Saints, French novelist Jean Raspail painted a bleak but powerful picture of the West inundated by mass immigration, and terrorized by jihadists.

Men conquer continents. But men get raised by women. If you want a civilization that breeds men primed from childhood for conquest and domination you need to control the women. Islam does that.

Conquests Are Made By Men. Where Are Ours?

John Paul might have received a revelation from God. Or maybe his keen intellect simply had the piercing insight: Men conquer continents. But men must be raised by women. If you want a civilization that breeds men primed from childhood for conquest and domination you need to control the women. Islam does that. In fact, you wouldn’t be far wrong if you saw Islam as the real-world answer to The Handmaid’s Tale: A system for pressing women into service, to breed and raise men ready for jihad. Allah calls all able-bodied Muslim men to join it.

If that civilization, hungry and soured on memories of historic defeats and failures, looks across a sea as narrow and placid as the Mediterranean, what does it see? A continent where transient consensual pleasure in fleeting sexual encounters has replaced the mores of millennia. Where even women profess that brittle new creed, to pretend that it leaves them happy and free. Where cradles lie empty and young men shrug at their fathers’ flags, their grandfathers’ churches, and their kid sisters’ long list of “hook-ups.”

Many Muslims believe too much, and most of it is wrong. But the very excess and surfeit of their violent superstition has burst the seams of their backward nations. They have marched in their millions to the land where men believe too little. Where faint Kantian copies of forgotten Christian virtues hang in nice little plastic frames on the wall, promising everything to everyone since nothing means anything. Where the government trains men to urinate sitting down, because doing anything else is “sexist.”

The pale, post-male men try to buy peace with fulsome apologies and checks from the government. The men of faith stare back at them contemptuously. Can it really be this easy, conquering the West? Or is this some kind of trick? They cash the checks, and wait in their mosques, keeping their women out of sight and frequently pregnant. The government’s checks buy the diapers.

This cannot continue. The fierce and fertile Puritans and their heirs would not live long in peace alongside the Indians. As the natives’ chiefs sold off one county after another for trinkets and whiskey, sometimes a religious leader would arise among them. He would call out the leaders’ betrayal, and summon the people to resistance. To return to the old faith, then defend the tribe. It usually started with a vision from the spirits.

Was St. John Paul II our answer to Sitting Bull?

In my next column on this topic, I’ll examine what a virtuous uprising of the worldwide Christian tribe might entail.