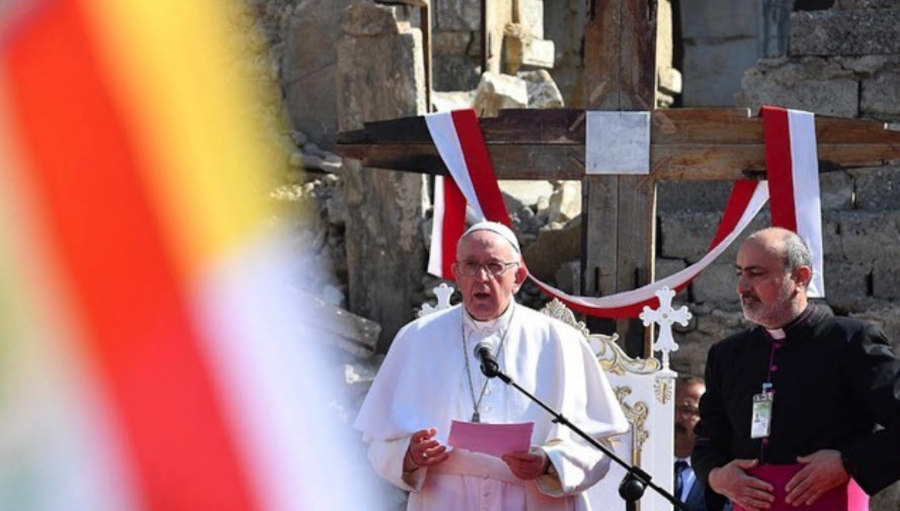 Last weekend Pope Francis visited Iraq. He delivered three public talks there: To Iraqi leaders when he arrived. At a Christian-Muslim meeting in Ur. And in a homily at Mass in Erbil.

Let us examine each of those addresses. Why? Because, despite Protestant (and Orthodox) misgivings, Catholicism’s Vicar of Christ is the head of the largest branch of Christendom. Over a billion people (almost half the world’s Christians) regard him as religious leader. In the Middle East, many Muslims and Christians view the Bishop of Rome as a political leader, as well. So when the Pope visits the region, we should all take heed.

The Pope’s First Address: Apologizing for … What?

Francis first spoke to Iraq’s political leaders at the palace in Baghdad. He opened with the theme that would dominate his trip: Abraham’s role in Judaism, Christianity and Islam. He also stated that “authentic teachings of religions” would be peaceful. Pope Francis went on to decry the “scourge of terrorism and sectarian conflicts” stemming from “fundamentalism.” Per Franciscan habit, he didn’t dare identify this with Islam.

The Pope said Iraq could show that diversity leads to harmony. This, however, ignores that both Middle Eastern and Western scholars find ethnic diversity actually creates societal problems.

Francis asked that Iraq not simply rebuild, but “rebuild well.” Forgive me, but that seems an intentional echo of Joe Biden’s “build back better.”

How about the Pope’s “asking forgiveness … for so much destruction and cruelty.” What is he apologizing for? The Vatican didn’t rip apart Iraq with an ill-considered invasion. George Bush’s America did that. And Christians weren’t the ones beheading Shi`is and enslaving Yazidis. That was the Sunni Muslim group ISIS. In this, Francis reminds of Barack Obama’s apology tour a decade ago.

The Pope then declared that “the name of God cannot be used to justify acts of murder, exile, terrorism and oppression.” Well, actually it can be, and has been. But the folks who do so shout Allah’s name during. So the Pope let politeness to his Muslim hosts trump the truth.

The Pope’s Second Address: Can’t We All Just Get Along?

The Supreme Pontiff also addressed an “interreligious meeting” near Ur. In attendance, besides Iraqi Catholics, were Sunni and Shi`i Muslims, Yazidis (a quasi-monotheistic group) and even Mandaeans (an ancient Gnostic sect). Again, he opened by invoking Abraham as father of Jews, Christians and Muslims. In short order Francis opined that “hostility, extremism and violence” are “betrayals of religion.” He also said that “terrorism abuses religion.” And that “terrorism invaded” northern Iraq.

Strikingly absent from the Holy Father’s discourse in this venue was any mention of Jesus Christ.

So just like confused policy-makers in the U.S., the Bishop of Rome blames a tactic, rather than the belief system that espouses jihad, for the likes of ISIS. The solution? “The decision not to have enemies.” Perhaps Francis should read Tolkien, who opined on this from his perspective as a veteran of World War I and a scholar of medieval history. “It needs but one foe to breed a war, not two.”

Strikingly absent from the Holy Father’s discourse in this venue was any mention of Jesus Christ.

The Pope’s Third Address: The Gospel — But Keep It to Yourselves

Finally, the Pope sermonized at a public Mass for the country’s small Chaldean Catholic minority. Here of course he invoked Christ (finally!). He could really do no other, since the Gospel reading was from John 2:13-25. This is the account of Jesus running the moneylenders out of the Temple. Francis made the excellent pastoral point that just as the Temple was cleansed, so too must our hearts be. But of what? “Of the falsehoods that stain it.” Why? “We need to be cleansed of … deceptive securities.”

You know what “deceptive security” the leader of the Catholic Church fostered during this trip? That “Islam is a religion of peace,” totally unrelated to terrorism. (Despite the fact that, as I point out regularly, three-fourths of the world’s transnational terrorist groups are Islamic. And the world’s deadliest terrorist groups are comprised of Muslims. Not members of Qanon.)

Pope Francis did preach the Gospel in Erbil. But to other Christians. “Jesus Christ, he alone can cleanse us of the works of evil. Jesus, who died and rose. Jesus, the Lord!” Then Il Papa fell back into feeble post-Vatican II ecumenism. “He sends us forth, not as proselytizers, but as missionary disciples.”

Actually, Christ sends us as both. In Matthew 28:16-20, He says “go and make disciples of all nations, baptizing them in the name of the Father, and the Son, and the Holy Spirit.” Preaching that in a majority-Muslim nation would have been imprudent. And perhaps impudent. But what happened to the Church speaking truth to power?

Francis is Not Benedict

I am a Lutheran Christian, but also a historian. I thus greatly respect the Catholic Church. Both as a defender, across the centuries, of Western civilization. And as a repository of the Gospel, across space and time. I realize a Bishop of Rome must tread carefully. Remember the riots and killings that ensued when Pope Benedict XVI, 15 years ago, even mentioned Islam and the sword in the same context?

Francis, rather than confront the Islamic world with its own teachings, has trod the wide ecumenical path Nostra Aetate laid out in two documents Lumen Gentium (1964) and Nostra Aetate (1965). LG states that, among those who have not yet received the Gospel, “the plan of salvation also includes those who acknowledge the Creator, in the first place among whom are the Moslems: these profess to hold the faith of Abraham.” NA, too, speaks approvingly of Muslims. But it also stresses “Christ, who is the way, the truth, and the life (Jn 1:6).”

Granted, it may be unrealistic to expect the world’s foremost Christian leader to preach, in Iraq, that no one will come to the Father through the Peacock Angel, John the Baptist — or even Muhammad. But couldn’t the Vicar of Christ at least have refrained from repeating the mainstream media-style boilerplate about Islam? Francis’ overbroad “can’t we all just get along” approach sacrificed candor on the altar of comity.

After all, Christ Himself did warn against that broad road and its wide gate. “Small is the gate and narrow the road that leads to life, and only a few find it” (Matthew 7: 13,14). The Pope, in his public discourses there, failed to share Christ with Yazidis, Mandaeans and Muslims in Iraq. And shouldn’t His Vicar do that?