Pope Francis and the Communist Crucifix 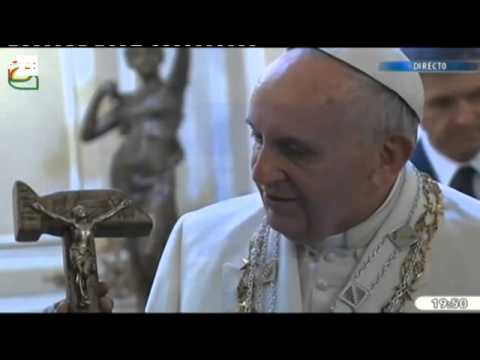 Now we see Francis’s unhappy face, said one Facebook reader, commenting on the video that shows the President of Bolivia giving the pope a crucifix made out of a wooden hammer and sickle, once the symbol of the Soviet Union and the symbol for the Communist left around the world. Francis seems to say “This is not all right.”

The gift was a replica of a crucifix kept by Fr. Luis Espinal, a Jesuit tortured for five hours and then murdered in Bolivia in 1980 by a paramilitary group. On the way from the airport the pope had prayed for him near the site where his body was found. Presumably President Evo Morales, described by Vatican reporter John Allen as “more or less the successor to Hugo Chavez as Latin America’s most notorious anti-Western populist,” thought he was being clever.

This sort of thing happens to popes all the time. Every politician wants to get something from the pope, usually the impression that the pope supports him or, once in a while, that the pope doesn’t support  him. Or, as seems to be the case with Morales, that he’s stood up to the pope.

The pope, as the guest, has to deal with the arrangements as best he can. Allen explains: “the willingness to suffer some public embarrassment through clumsy efforts [by the host] at short-lived propaganda coups is the price popes have to pay in order to press regimes to reform behind the scenes.”

When Politicians Visit the Pope

When a politician visits the pope, things often come out better. Readers may remember Nancy Pelosi’s comic efforts a few years ago to spin a visit with Pope Benedict as a meeting of the minds. He spoke to her about the responsibility of all politicians, especially Catholic ones, to protect the unborn.

She, not surprisingly, forgot to mention it when she released her chipper press release. The Vatican had also refused her request to be photographed with Benedict. The pope wasn’t born yesterday.

Even with the embarrassments, those papal backstage efforts seem to pay off, Allen suggests. John Paul II visited Chile under Pinochet and appeared with him on a balcony of the president palace. He visited Argentina under its military junta, and then Paraguay under Alfredo Stroessner. Each tried to benefit from the trip.

But, as Allen notes, within a year each government fell. Sometimes, the pope can encourage authoritarian governments to loosen their grip and once they let go, the democratic resistance  — encouraged by the pope’s visit — can keep them from taking control again. That’s the hope, certainly, and the pope is willing to suffer some diplomatic embarrassments to increase the odds of this happening.

More Than the Popes Intend

It also happens to popes that people read into their acts more than the popes intend. Morales will have seen Fr. Espinal as a predecessor and one with the pope’s blessing, which is true, but not in the way Morales and others think.

Francis had prayed for Espinal as “our brother, a victim of interests who did not want him to fight for the freedom of Bolivia.” He was definitely “of the left,” said a colleague from those days, Fr. Xavier Albo. A Spanish priest who came to Bolivia in 1968 and became a Bolivian citizen two years later, Espinal, however, “never belonged to any party or pretended to be part of one.”

He “gave a lot of importance to the dialogue between Marxists and Christians. It was not pro-Soviet. … [It was] the need for the church to be close to the popular sectors. Some understand this, others don’t. To me it is very clear.”

Francis doesn’t do that. He has other ways of judging. He confounds worldly ways of separating people into the sheep and the goats.

Austin Ivereigh’s excellent biography of Francis, The Great Reformer, describes the then-priest and later cardinal’s long battle with the Marxists in Argentina, including Marxists and other leftists among his brother Jesuits. He didn’t reject their concern for the poor and their opposition to the regime. He rejected their reduction of Christianity to politics and to that materialist politics in particular.

In 1980, as one of the leaders of the Jesuits in Argentina, Francis described what he believed are the “criteria of apostolic action,” meaning social witness. Ivereigh writes: “The action, he wrote, must be rooted in the concrete demands, as well as the culture and values, of the pueblo fiel [the faithful], and so avoid the approach of the enlightened classes (whether liberal, left-wing, or conservative) who were ‘for the people, but never with the people’.”

Their action … must start from a direct contact with the poor, seeing concrete acts of mercy as acts of justice, and then reflecting on that encounter. The new awareness that resulted, says Bergoglio, would eventually bring about structural change, avoiding the sterile “we-should-ism” of those who pursue justice in the abstract. … That never meant acting on the poor, as ideological elites did.

This, I think, is what Francis saw and honored in Fr. Espinal: a man who was with the people as well as for them. It was not an endorsement of all his political commitments, as represented in that hammer-and-sickle crucifix. It was the memory of his love for the people of his adopted country and his courageous work for their good. He had risked his life for them and someone took his life for it.

Whether or not Espinal was right in his politics isn’t for Francis the main thing. What matters is the kind of Catholic he was, how much he loved God and the people God had sent him to serve, and Francis sees him as one worth remembering and honoring.

So President Morales, who saw only the politics and a chance to make a point, got the pope’s unhappy face.