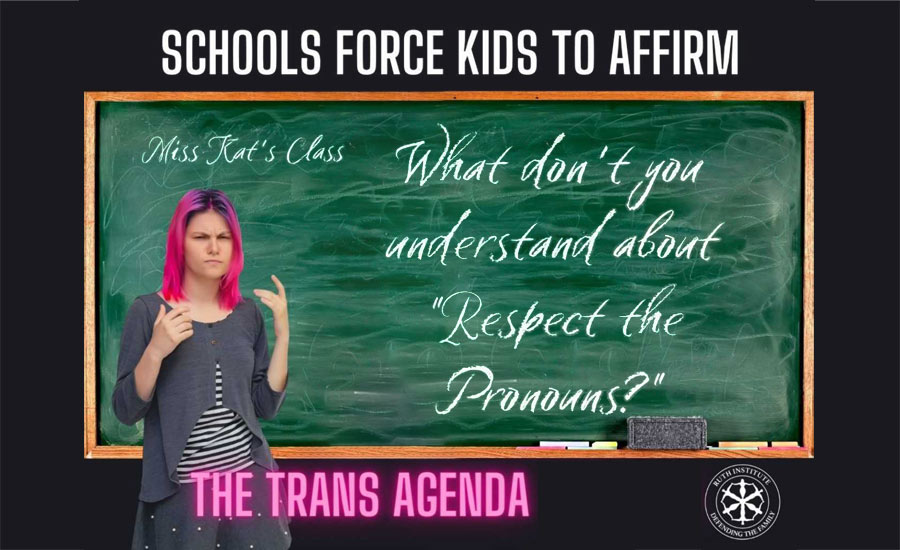 Dr. Quentin Van Meter, president of the American College of Pediatricians, talked about how politics has forced its way into the medical arena, putting “its heel on our neck.” His organization fights for the conscience rights of doctors to follow the Hippocratic Oath’s mandate to “do no harm.” This includes providing alternatives to women considering abortion and guiding transgender individuals through psychological evaluations and counseling.

Maria Keffler and former trans-child Erin Brewer are the founders of Advocates Protecting Children, which focuses on protecting kids from the transgender ideology, including through legislative outreach. Their website contains podcasts, books, and their Common Sense Care series: “Parenting Gender-Confused Kids with Care and Love.”

All three guests frequently help parents shocked by otherwise healthy, well-adjusted children suddenly saying they hate their body and want cross-sex hormones. These parents get bullied by school counselors, principals, pediatricians, and their friend group into accepting and affirming their child’s new gender. Otherwise, parents are told, their child will commit suicide. The myth bullies parents into signing consent forms.

“We’re teaching a whole generation that if they don’t get what they want, they should threaten suicide,” said Erin Brewer. To the idea that a child must be trans if they are “consistent, persistent, and insistent,” Dr. Van Meter pointed out, so are toddlers, “but we still don’t let them stick a screwdriver into an electrical outlet.”

Dr. Van Meter explained that European countries, which began policies of affirmation more than a decade ago, have come to the conclusion that such medical and surgical treatments are harmful. Several have banned these treatments for minors in their country, and instead focus on mental health counseling. Meanwhile, the U.S. is running full speed in the opposite direction with more transgender clinics opening and Planned Parenthood rapidly dispensing hormones.

Learn more from these three dynamic speakers, and others, by coming to the Ruth Institute’s Summit June 24-25 in Lake Charles, Louisiana.

A Wisconsin school district filed sexual harassment complaints against three middle school boys for not using the preferred pronoun of a male classmate who says he’s a girl.

“When people hear ‘sexual harassment,’ they think assault or sexually suggestive language,” Morse observed, “not a child who refuses to use a classmate’s new name or says ‘he’ when referring to a boy who now claims to be ‘they.’’’

The uber-progressive Fairfax County, Virginia, public school system is vetting a 70-page “Students Rights and Responsibilities Handbook,” which warns that students could be disciplined for “hate speech” including “misgendering” classmates who now claim to be a different gender and “deadnaming” (using someone’s birth name instead of new name).

One irate mother called it “speech policing” and demanded to know why a student should be punished for affirming “reality.’’

Such Orwellian policies often result in tragedy. In neighboring Loudoun County, Virginia, a girl was raped in a girls’ bathroom by a skirt-wearing boy who “identified as female.”

“These policies are just the latest in a long string of persecutions by the Sexual State against dissenters or hold-outs. The Sexual Revolution must resort to compulsion to advance its irrational agenda.”

“Bakers and florists must be forced to contribute to same-sex ‘marriage’ ceremonies, despite the dictates of conscience. Teachers have lost their jobs for refusing to play make-believe with names and pronouns. And now, middle school boys may be labeled sex offenders for upsetting the thought police.”

“If reason is brought into the picture, even a child can see the idiocy of the transgender mythology. That’s why Sexual Revolutionaries must resort to force,” Morse explained.

“The Ruth Institute is one of the few organizations pointing out that the whole Sexual Revolution, including the gender ideology, is irrational and inhumane.”

At the Ruth Institute’s Summit for Survivors of the Sexual Revolution, June 24-25 in Lake Charles, Louisiana, former transitioner Walt Heyer will receive the Public Witness of the Year Award. Walt lived as a woman for eight years, eventually re-embraced his male identity, and became an advocate for those dealing with gender identity issues.” Heyer will speak on: “Don’t let them kid you: change is possible.”

The Core Leadership Training at the Summit for Survivors of the Sexual Revolution, (June 24-25 in Lake Charles, Louisiana) will be “a boot camp for pro-life, pro-family activists to help them be more effective spokesmen for the family,” said Ruth Institute President Dr. Jennifer Roback Morse, Ph.D.

The Core Leadership Training, June 24, is an in-depth examination of research conducted by outstanding experts in their fields, and can be taken as part of the Summit or registered for separately.

Dr. Morse was a campaign spokeswoman for California’s winning Proposition 8 campaign, defining marriage as the union of a man and a woman. She has authored or co-authored six books and spoken around the world on marriage, family and human sexuality. She earned her Ph.D. at the University of Rochester and taught economics at Yale and George Mason Universities. Morse was named one of the “Catholic Stars of 2013” on a list that included Pope Francis and Pope Benedict XVI.

The Rev. D. Paul Sullins, Ph.D., is a Senior Research Associate of the Ruth Institute. He recently retired as Professor of Sociology at the Catholic University of America, Washington, D.C. Dr. Sullins is a leader in the field of research on same-sex parenting and its implications for child development. He has written four books and over 100 journal articles, research reports, and essays on issues of family, faith, and culture. His reports on clerical sexual abuse have garnered international acclaim.

Dr. Quentin Van Meter is the President of the American College of Pediatricians. He has worked as a staff pediatric endocrinologist at the Naval Hospital in San Diego and was Chairman and Director of the residency training program at the Naval Hospital Oakland. He retired from a 20-year career in the Navy Medical Corps and moved to the Atlanta area where he joined the Fayette Medical Clinic as a pediatrician and pediatric endocrinologist. He also developed his own full-time endocrine practice. Dr. Van Meter is an adjunct associate professor of pediatrics at Emory University School of Medicine and an associate clinical professor of pediatrics at Morehouse Schools of Medicine. He campaigns around the world to educate health care professionals about the harm of affirmation of gender incongruences.

Don Feder is the Ruth Institute’s Communications Director and Coalitions Coordinator. He is a graduate of Boston University Law School and admitted to the practice of law in New York and Massachusetts. Feder was a Boston Herald staff writer and syndicated columnist from 1983 to 2002. Feder has been writing and speaking about Demographic Winter since 1999 and has lectured on the issue in more than 30 countries.