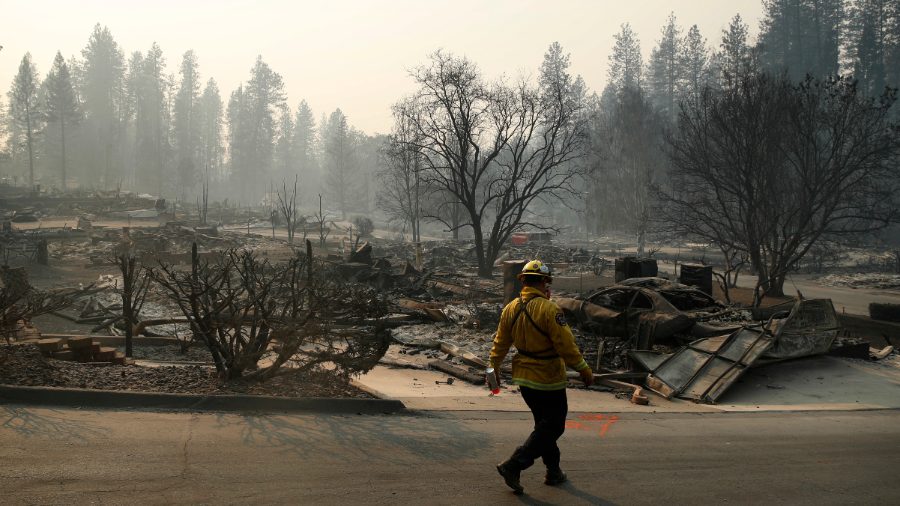 A firefighter searches for human remains in a trailer park destroyed in the Camp Fire, Friday, Nov. 16, 2018, in Paradise, Calif.

Tens of thousands of homes were destroyed in the Camp Fire in Paradise, Calif. At last count, 83 people died and the number rises daily. One pastor of a Paradise church says that the fire was an answer to prayer. Just not like he or his congregation could have ever imagined.

Pastor Tim Bolin of Paradise Alliance Church told The Stream his church has recently been praying for God to provide an opportunity to share the Gospel in their community. That He would change the hearts of those in Paradise. They never thought that prayer would be answered in such a sorrowful way.

Open to Hearing the Gospel

“The community’s changed,” said Bolin. “What’s interesting is, I just talked to my neighbor, I just moved into a new house seven days before the fire. His house and our house are actually still standing, but the fence between us burned down. He’s not a believer but he said, ‘Tim, I’m spiritual. Maybe I need to go to church. Maybe you and I could talk about God and why did He spare our houses?’ All the sudden he’s asking questions and I’ve never had an opportunity before. He said, ‘Isn’t it ironic that our fence burned down so we could talk to each other?’ … So, we talked for about 20 minutes on the phone. And, he’s open to hearing some stuff, about the Gospel, maybe and God and the whole thing. So, we’re getting opportunity already.”

God’s Hand Even in the Fire

The fires didn’t burn down the church or Bolin’s house, but did come close to harming his family. His daughter-in-law and grandsons were in the middle of the firestorm. She’d tried to get her kids to safety, but ended up with a wall of fire on either side of her car. She took her kids and ran, leaving the car behind. Just about that time, a firetruck hauling a bulldozer pulled up. The fireman told her to lay down in the bulldozer because she and the kids would be protected from branches falling. She did, but later he told her to get back in her car and follow him to safety. He made a path for her to reach the hospital, where others were gathered.

His family is safe. Bolin is now focusing on getting others back on their feet. “We’re praying that the church can be the lighthouse in that community.”

When he and others get back into Paradise in a few months, he’s planning to make the south lot of the church into parking places for RVs and trailers. It’s then, he explained, that reality will hit. “You’re going to have to really help some people with comfort and love and hope.”

For now, Bolin is asking for prayer. “That’s the only thing sustaining us. And I don’t say that lightly. I really don’t. The last few days, we’ve heard from several sources, the adrenaline has worn off. And despair’s hitting. And all those emotions are hitting them and I just believe prayer’s our best tool. Like I’ve said before, it’s not the spare tire in the trunk, it’s the steering wheel right now. And it’s holding us up. … It’s not the least you can do, it’s the best you can do — prayer. It’s so important.”

Please continue to pray for those affected by the California wildfires.