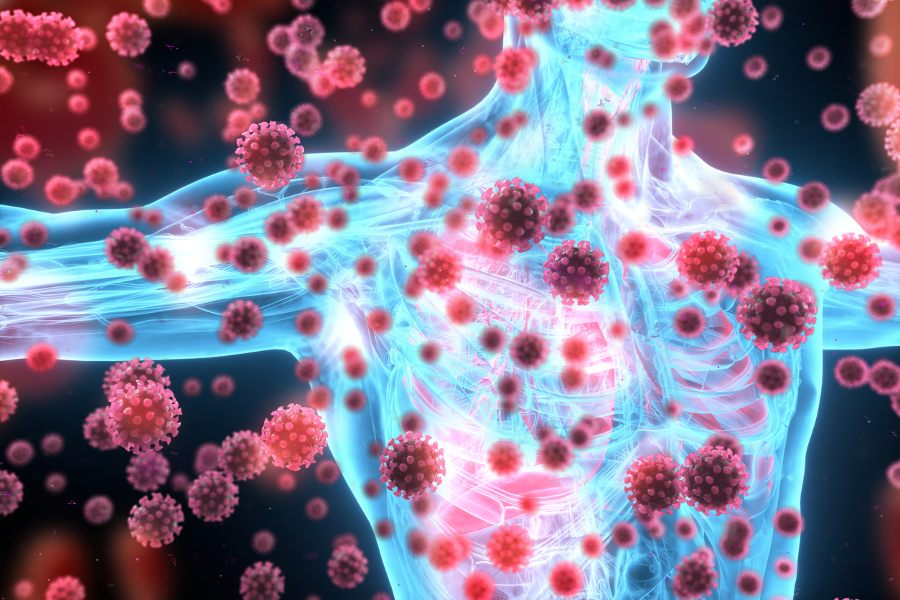 NOTE: One floor below us, in the LIFE Today studio, Dr. Don Colbert will be taping an episode of LIFE Today with James and Betty Robison It’ll be one of the first in-person interviews the show has been able to do since the COVID-19 lockdowns kept guests from being able to visit us. Keep an eye on LIFE Today‘s schedule for air dates.

A silent war against pandemics is taking place around the clock, every day of our lives. This war occurs not in government labs or hospitals. Rather, it is happening inside of you and me, even at this very moment. Within every human body on the planet, God has installed the best defense system against viruses, bacteria, and plagues of all kinds. This defensive team is called the immune system, and it is brilliantly effective and capable of adapting to meet new threats.

When the physical barrier is breached, we find that we develop a swollen infection at the site of a cut, or a persistent cough, or something worse like a viral or bacterial infection in our bloodstream. When viruses and bacteria pass through the skin or mucous barriers, it becomes an inside game, and here is where the genius of our immune systems really shines.

When our immune system is strong, we enjoy a high level of protection — no matter what contagion is sweeping the globe.

Everyone possesses two broad types of immune system: innate and acquired (or adaptive). Every person is born with an innate immune response. Each of us then uniquely develops an acquired immune response based on the invaders we are exposed to.

The innate immune response is general and highly sensitive, recognizing anything that is not part of our bodies and alerting the rest of the system to get to work. Your body can recognize millions of different invaders. The acquired system then kicks in to specifically identify and react to that invader. Our immune system remembers every bacterium and virus it has encountered before, and can effectively repel it should it attack again.

These branches of our immune system work together like little armies — almost literally.

A type of white blood cell called “granulocytes” is your body’s first responder. These cells don’t have memory of what has invaded before, and their methods of attack are not very refined: when you scrape yourself or some invading entity or debris is introduced beneath your skin, the granulocytes gather there en masse and begin to digest foreign particles. Granulocytes hold the fort until more sophisticated and trained responders arrive. The granulocytes usually die throwing themselves into battle.

Another type of white blood cell then arrives, the macrophage. Far fewer in number, the microphage is more of a specialist. It identifies an invader’s specific characteristics and attacks with uniquely tailored chemicals, which are known collectively as “cytokines,” and these can cause fever and sleepiness in our bodies.

While they seem to perform the same function, macrophages are better communicators than are granulocytes. Macrophages spread the word to other parts of the immune system, especially T cells, which are even more specific and powerful. Amazingly, the macrophages take parts of the now-dead invaders and place them on cup-like structures. They then share this information with a certain type of T cell. Only a very few T cells recognize the invader by that information, but when they do, they launch a specific attack by reproducing many cells that recognize the particular antigen and dispersing them throughout your body.

How did T cells get so smart? They went to school, quite literally, in an organ called the thymus. The thymus is perhaps the most important organ involved in your immune reaction. It is located in front of the heart and is the military academy where T cells, which are born in our bone marrow and move to the thymus, learn what to fight. In the thymus, each T cell is shown different antigens. If the T cell recognizes the antigen and reacts to it as to an invader, the T cell moves on to further training. If it fails to respond to a foreign antigen, it is destroyed because it is useless in an immune response.

The T cell is then presented with parts of the organism itself — your own body. If the T cell treats this like an antigen, the T cell is destroyed — and good thing. Otherwise, it would attack your own body as if your body were the invader. This is the kind of reaction that causes auto-immune diseases.

When a T cell passes all its tests, it is sent to the frontlines — the bloodstream — to look for invaders. The thymus, then, is the site of our immune system’s most critical preparations.

During an attack, another type of cell called B cells perform a different function. They create antibodies tailored to the specific antigen, then go about their job in several different ways. One thing B cells do is coat the invader with an antigen that attracts macrophages and granulocytes, which then destroy the “bad guy.” B cells also cover antigens with a kind of glue which causes them to stick together, making them an easy target for other immune responders to attack and kill. Yet a third strategy is to coat a bacterium or virus with an antibody which prevents it from attaching to other cells. Your B cells also “remember” the invader and record its characteristics in their genes.

We are still learning about the brilliant intricacies of the immune system, but what we know already about its scope and complexity is simply breathtaking.

Redundancy is built into the immune system so that if one system or immunity-related organ is lost or damaged, the other systems and organs can pick up its functions. Our God-given immune systems are beautiful and powerful. The cells that fight foreign invaders are the true heroes in any pandemic. When we choose to walk in a basic lifestyle of health, we give our “troops” everything they need to fight against pandemic diseases and run-of-the-mill infections. When our immune system is strong, we enjoy a high level of protection — no matter what contagion is sweeping the globe.

Don Colbert, MD, was a board-certified family practice doctor for more than twenty-five years in Orlando, Florida, and most recently in Dallas, Texas. He is also board certified in antiaging medicine through the American Academy of AntiAging Medicine and has received extensive training in nutritional and preventative medicine. He is the author of three New York Times best-selling books, including Let Food Be Your Medicine, The Seven Pillars of Health and Dr. Colbert’s ‘I Can Do This’ Diet along with best sellers Toxic Relief, the Bible Cure series, Living in Divine Health, and Stress Less. He has sold more than ten million books and treated more than fifty thousand patients in his years of practicing medicine