Media rarely cover prayers at campaign events, yet headlines about one religious leader persist this week. An Israeli Jewish leader provides clarity on what happened — and why. 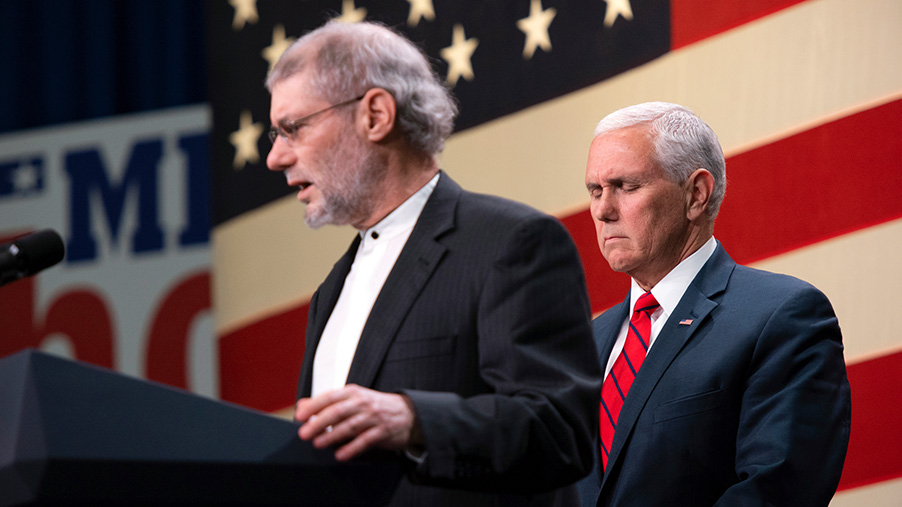 Vice President Mike Pence, right, prays with Rabbi Loren Jacobs, of Bloomfield Hills' Congregation Shema Yisrael, for the victims and families of those killed in the Pittsburgh synagogue shooting, at a rally for Republicans in Oakland County, Monday, Oct. 29, 2018, at the Oakland County Airport in Waterford, Mich.

By Jonathan Feldstein Published on November 1, 2018 •

In the Jewish community, nerves are raw after Vice President Mike Pence participated at a campaign event in Michigan recently. A messianic congregation leader offered what may have been well-intentioned prayers for the victims of the anti-Semitic Pittsburgh massacre. But it caused offense for multiple reasons.

I have no doubt of the genuine intent of having a prayer at a campaign event to support and comfort the victims and their families. Yet this prayer became a lightning rod for blowback, criticism, and visceral responses. It upended the good intended.

As an Orthodox Jew, I have a different take on what happened and why.

When Partisan Protests Cloud the Issues

This week in Pittsburgh, we have seen many reduce the synagogue massacre to a partisan message. Banners were raised on the streets saying “President Trump, you are not welcome.” Others noted “Vote Democrat” or various other causes.

Somehow they missed the millions expressing genuine solidarity, including conservatives. Many protesters point to the Michigan rally prayer as a point of offense. But I don’t believe that Vice President Pence had anything to do with inviting the messianic rabbi.

Pence is known to be tremendously pro-Israel and respectful of Jews. The Vice President does not spend much time considering which clergy delivers prayers at local events. (Maybe he does now!) These rallies take place multiple times a day in the weeks before an election.

This event was not even planned by Pence’s team. The invitation was extended by Republican candidate Lena Epstein—who happens to be Jewish. “I invited the prayer because we must unite as a nation, while embracing our religious differences, in the aftermath of Pennsylvania,” Epstein tweeted.

Yet Pence introduced him as “a leader in the Jewish community,” which is misleading. I believe he should apologize for any hurt or offense caused, even inadvertent, during this sensitive time of mourning 11 Jewish victims. A clear, strong, and unambiguous statement could go a long way.

Whether or not he does, it doesn’t change my perspective. I’ve spent years building bridges between Jews and Christians, actively engaging Christians of all backgrounds. This gives me the real-life experience to know this incident is not so unique.

Why Jews Were Offended

At a time where Jews find so much to bicker about, the various streams of Orthodox, Conservative, Reform, and Reconstructionist Jews largely agree on one thing. This was not a remembrance prayer Jews recognized, and the messianic rabbi is not representative of the mainstream of Judaism.

The Yizkor memorial prayer traditionally names the deceased.This congregation leader instead ticked off a list of Republican candidates and prayed for their success. In a prayer meant to memorialize the victims, this was jarring and inappropriate—no matter the religious orientation.

Jews look at this and cannot understand how or why such a mistake—an affront—could be possible. We literally just don’t understand. That’s legitimate.

Subsequent remarks also raised troubling questions. Soon after the Pittsburgh shooting, White House senior counselor Kellyanne Conway responded in a TV interview. She used the phrase “anti-religiosity” to describe the motive of the shooter. This attempt to universalize the massacre as something more than plain anti-Semitism was also jarring.

The evil ideology of anti-Semitism compelled this deranged gunman. This cannot be stated enough. Otherwise, it obscures the identity of those murdered—as if they were “random…folk” as President Obama suggested after the murder of Jews in Paris.

Jews represent only two percent of the U.S. population, but are victims of 54 percent of anti-religious hate crimes.

Jews represent only two percent of the U.S. population, but are victims of 54 percent of anti-religious hate crimes. Principles of religious freedom compel Americans to affirm the value of minority groups, especially in moments of crisis. Let’s not overgeneralize an anti-Semitic attack as if it’s just like other hate. Anti-Semitism is the oldest form of hate and Jews sadly live under the cloud of that.

I spend much of my time among Christians who, like Vice President Pence, genuinely love Israel and the Jewish people. Yet many simply don’t know why this would be a problem. Some don’t understand why mainstream Jews are different from messianic Jews.

How Friends Can Cross Dividing Lines

With a blue knit kippah always on my head, I am visibly identifiable as an Orthodox Jew. Attending Christian conventions, I am introduced as Jewish. But many don’t know what that means or how we differ.

Some Christian friends affiliate with messianic congregations to feel a deeper connection to the Jewish roots of Christianity. They are comfortable in affirming belief in Jesus and interweaving aspects of Judaism into their worship. For many Christians I know, it feels authentic.

Recently, I was invited to spend Shabbat with a messianic congregation. These Christian friends didn’t comprehend the issues that would create for me as an Orthodox Jew. They sincerely invited me to make me comfortable. Because we are adults and friends, I was able to explain to them the issues. This created a deeper level of friendship, respect, and awareness.

These devout Christians are my friends. They connect with me, my family, and other Jews out of love. Never would they do anything to hurt or offend me. And still, they just didn’t know. It’s no surprise that many Christians know next to nothing about Judaism. Nor should that be taken as willful “ignorance” as some Jewish friends suggest.

“Jews and Christians have so many ways in which we can, should, and really need to get along. We can respect one another.” – Jonathan Feldstein

In an airport, a teenage boy recognized me as Jewish. But he didn’t know what that meant, so he asked. (I later learned he was the son of a pastor.) We engaged in a wonderful conversation. He asked me what was on my head, so I explained. As if he had discovered something wonderful, he pronounced loudly to his mother, “Look mom, he has a Jew hat.” His mother cringed in embarrassment.

In another situation, that might have been offensive. But in the context of where his interest and curiosity was coming from, I certainly didn’t take it as such.

I believe Vice President Pence did not know the person he was introducing. Maybe he should have, but he’s not at fault. Theologically, as a Christian, perhaps nothing said in the prayer seemed out of place. Blaming him, however, for not understanding all Jewish sensibilities is out of place.

Still, many perceived something other than what was intended. There is a Jewish principle that apologizing for something that truly caused hurt does not make someone less of a man, but more so. Thus, I hope Pence issues an apology. In these situations, Jewish tradition calls it one’s responsibility to make it right.

Jews and Christians have so many ways in which we can, should, and really need to get along. We can differ on some big things, but share in common so many others.

Let’s agree where we can and agree to disagree where we do. We can respect one another. Let’s not make issues out of things that are not understood—or that don’t exist.

Explore The Stream’s complete political coverage, and sign up to receive top stories every week.