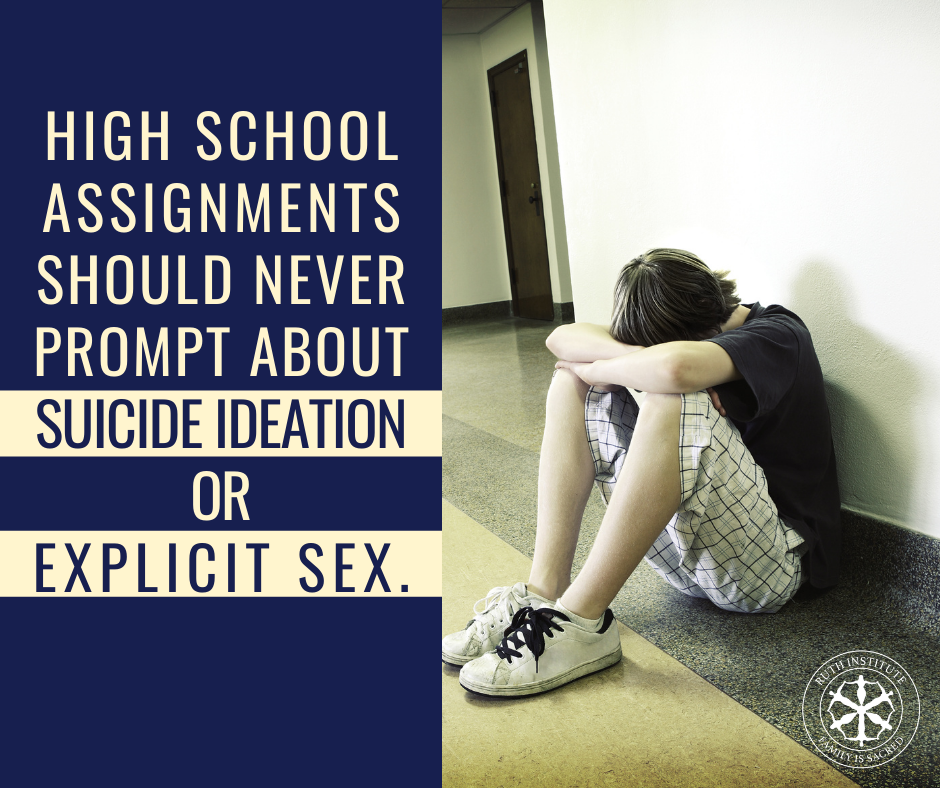 “Parents are objecting not only to the sexually explicit writing prompts, but also to prompts that can only be called suicide-friendly,” Morse said. “Masquerading as a writing exercise, some are ‘prompting’ students to think about suicide in a way that would not occur to a mentally healthy person. The Sexual Revolution is, at its core, a death cult.”

“Mayor Shubert is to be commended,” Morse said. “Most elected officials would rather close their eyes to this type of corruption of the young than take a stand.

“Clearly this is propaganda thinly disguised as education. Oddly enough, this book didn’t suggest essays on: ‘Why I intend to remain chaste until marriage,’ ‘Why suicide is morally wrong,’ or, ‘Explain to your best friend the dangers of premarital sex.’

“This shows the absurdity of claiming that these ‘prompts’ are just suggestions for essays. This book is indoctrination, steering students to advocate for a certain point of view.”

While the publication has been pulled, no one on the school board has resigned.

“Whether Mayor Shubert carries out his threat to bring criminal charges or not, this school board is on notice: people are watching,” Morse said. “Elected officials, parents, and the public at large, are waking up to their responsibility to be ever-vigilant to bar the schoolhouse door to the Sexual Revolution.”

Women Deserve to Know that the Pill is Killing Them

Natural Womanhood started a petition to the FDA requesting that birth control packaging and inserts disclosure all potential side effects of these products. Stark explains that even many doctors are uneducated on the risks of The Pill and other artificial drugs and devices used to prevent pregnancy.

Women on the pill report experiencing depression, anxiety, loss of libido, headaches, weight gain, nausea, stomach issues, and more. These women are also at an increased risk for breast cancer and potentially-fatal blood clots. In fact, every year, 300-400 women on the pill die from blood clots.

As an alternative to contraception, Natural Womanhood educates and encourages the use of fertility awareness as a safe, effective method of family planning. Watch the full interview and sign Natural Womanhood’s important petition to the FDA.

Will Doctors with Consciences Lose Their Licenses?

Dr. Michael Parker, a Medical Consultant and Board Member of The Women’s Care Center, a crisis pregnancy center in Columbus, OH, spoke at the recent Ruth Institute’s fourth annual Summit for Survivors of The Sexual Revolution.

In this video from the event, Dr. Parker talks about the obstacles to practicing Hippocratic medicine, that is, being a doctor who truly cares for the health of the patient. He explains that being a doctor used to mean respecting the dignity of the human person. Now the government has taken over health care and is removing conscience protections for those who have moral objections to performing abortion, euthanasia, and gender reassignment surgery. Doctors are not allowed to let their religious beliefs interfere with the service the patient requests. Essentially, doctors have become baristas taking orders from patients, rather than being allowed to help the patient as their moral code dictates.

There may come a time when doctors with conscience objections will lose their medical licenses, Dr. Parker said. “We need to take action. Eventually, it’s going to come down to civil disobedience to unjust laws.”

All talks from the Survivors’ Summit, “Reclaiming the Professions for Life and Family,” will be made available at the Ruth Institute YouTube page over the coming weeks.

“Rosary Around the Lake” Returns to Lake Charles, LA

On October 3, for the 4th consecutive year, the Ruth Institute will hold a Rosary Around the Lake in Lake Charles, LA, in conjunction with Rosary Coast to Coast.

According to the Rosary Coast to Coast website, “In 2021, the Spiritual Battle has intensified with the forces of evil becoming even more extreme in their positions against Life from conception to birth to natural death and the Sanctity of Marriage and Family. These forces manifest a radical rebellion against God’s creation of man and woman into which they seek to indoctrinate even our children.”

Ruth Institute President Dr. Jennifer Roback Morse, said: “I heartily concur with these sentiments. All of these evils are embodied in the Sexual Revolution, which the Ruth Institute is dedicated to fighting.”

“Whether or not you’re Catholic, we encourage all people of good will to join us in prayer for the welfare of our country,” Morse said.

The Ruth Institute is a global non-profit organization, leading an international interfaith coalition to defend the family and build a civilization of love. The Ruth Institute’s Founder and President, Dr. Jennifer Roback Morse is the author of The Sexual State: How Elite Ideologies Are Destroying Lives and Love and Economics: It Takes a Family to Raise a Village.