Obama Abandoned Syria’s Christians. Now Trump Can Save Them.

Islamist Turkey is poised to attack the only region where Christians are free and self-governing. 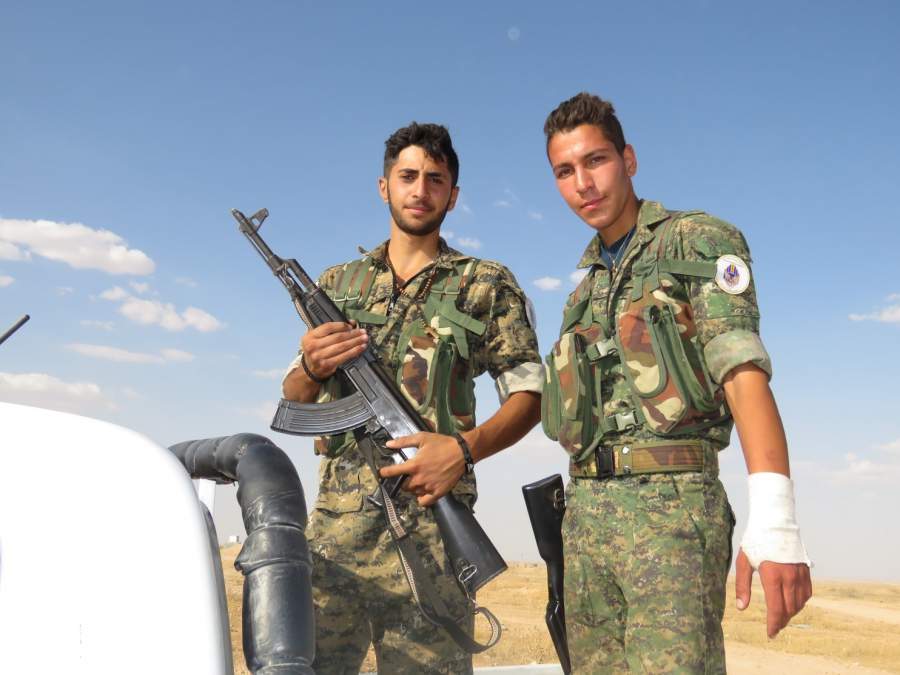 The Trump administration stated that it wants to eradicate ISIS and protect persecuted Christians in the Middle East. If it’s to have any real hope of accomplishing these crucial goals, the president and his team need to work with America’s allies who are already succeeding on the ground: the Federation of Northern Syria, which coordinates efforts of Kurdish, Arab, Syriac Christian and other resistance groups.

The Syriac-Assyrian Christian co-president of the Federation is appealing to the Trump administration to send support to the brave Christian fighters in Syria — whom President Obama refused to help. The Syriac-Assyrian Christian forces there are fighting bravely, but in desperate need of military and humanitarian aid, as can be seen in the new video below, which was provided as an exclusive to The Stream. Supporters of Syrian Christians hope Christians in the U.S., and this new Administration, will support them in ending ISIS and bringing freedom to the Middle East.

One big obstacle to this goal is “fake news” and propaganda, circulated by those who support (knowingly or not) the intolerant policies of Turkey’s autocratic, Islamist government — which will do almost anything to prevent the long-stateless Kurdish people from obtaining real autonomy. The Turks fear that any progress for Kurds in Iraq or Syria will stir up the millions of Kurds whom Turkey represses within its borders. Yet the Kurds have proved one of the few forces on the ground willing to protect Syriac Christians, Yazidis, and other oppressed minorities, as I learned from my experience in and with the area and have reported here at The Stream. In fact, the Kurds have formed a self-governing region (the Federation of Northern Syria) which grants Christians, women, and Yazidis real political participation—which they lack elsewhere in the region.

According to a highly misleading article in the leftist magazine The Nation, the Federation is little more than a fig leaf for the Kurdish militia, the YPG — which it alleges has been driving away the Arab population as well as dissident Kurds and others on a massive scale. According to the same article, the YPG is actually controlled by Iran and has a hidden agreement with both the Assad regime and ISIS. As evidence for this elaborate conspiracy theory, the article cites many  anonymous sources. The reporter did some ‘fact finding’ of his own, but seems to have only traveled to Turkey and Iraqi Kurdistan (KRG), which is controlled de facto by Turkey and its allies.

The Kurds have proved one of the few forces on the ground willing to protect Christians, Yazidis, and other oppressed minorities.

One interesting accusation he makes is that that the YPG allowed ISIS to take the whole region around Kobane, and only put up a token defense in the city center, in order to make sure that the fighting cleansed the area of Arabs. By this reporter’s account, the YPG is a masterful, diabolically cunning organization, which can predict and precisely control the outcomes of a shifting, chaotic battlefield — something that any military officer would know is quite impossible.

The use of evidence by the article in The Nation is interesting in its own right. It is widely known that it is not possible to do independent research among refugees in Turkey. Free journalism does not exist in Turkey anymore; just ask the hundreds of journalists languishing in prison for “thought crimes.” Turkey is furthermore a self-declared enemy of the YPG, and is the only country that has declared the YPG a terrorist organization. This means that anyone doing research in Turkey among refugees related to the YPG will be strictly monitored. Turkey’s secret police will send ‘witnesses’ to the reporter and manipulate his research. Finding ‘people who fled the YPG’ in Turkey is a strange thing in its own right, since Turkey blocked the border with the Federation and regularly kills those who try to cross.

Erasing the Syrian Christians Who Fight for Freedom

The Nation article contradicts the facts on the ground. The author suggests that the Kurdish YPG acts as the only fighting force in the Federation of Northern Syria (North-East Syria). This is simply untrue. I myself have been in Syria at the bases of both the Syriac-Assyrian forces and the Arab forces who cooperate with the YPG in the larger structure of the Syrian Democratic Forces. They are not in this for the show, as this video demonstrates very clearly:

The idea that the Arabs themselves would support Kurdification by driving Arabs out of the area is obvious nonsense. The multi-ethnic reality of the Syrian Democratic Forces is intentionally omitted from The Nation piece because it makes nonsense of the author’s premise. Would Arabs, Kurds and Syriac Christians drive away their own families and peoples? It would mean a constant war inside these areas, which is clearly not happening. The reverse is true: these peoples work together in governance and defense in a unique multi-ethnic alliance.

Kurds, Arabs and Syriac-Assyrian Christians, men and women, cooperate in governing the Federation of Northern Syria and defending it with its Syrian Democratic Forces.

The key report on which the reporter relies, from the Syrian Network for Human Rights and Amnesty International, repeats the same false storyline: Kurds driving Arabs away.  But independent journalists have debunked this charge, including its principal accusation — the so-called “Hajjia massacre.” This independent research also showed how unreliable are Syrian sources who work under the control of Turkish media minders. After probing questions, Amnesty International admitted that it spent far less time on research than stated and already retracted its ‘ethnic cleansing’ claim.  Other independent research has demonstrated how such propaganda is manufactured and used by Turkey and its allies. Finally, if the Federation drives away Arabs, why would Arabs from Iraq flee to the Federation and be taken in there and cared for as refugees?

The One Piece of Syria Where Christians and Women are Free

My own experience of the last three years proved to me that the caricature of the Federation as a one-party, tribal state is simply untrue. I have been cooperating with a Syriac-Assyrian party there and met with the representatives of several other parties who are active in the area. The reality that I witnessed in the area is that Kurds, Arabs and Syriac-Assyrian Christians, men and women, cooperate in governing The Federation and defending it with its Syrian Democratic Forces.

Why are people leaving the Federation? The real reason for the vast majority of departures is mentioned in The Nation story itself: the crippling economic blockade imposed by Turkey and the KRG. I remember sitting down with a priest there whose only complaint was that people were leaving due to economic deprivation. The reason that Turkey and the KRG maintain this blockade is simple: they do not want multi-ethnic cooperation, democracy and especially freedom to come to the Middle East. The culture of domination and oppression serves them well and they do not want to see deep, bottom-up change that leads to freedom and real human rights. They do not favor freedom of religion, or women working freely as legal equals of men — two realities inside the Federation of Northern Syria, but in few other places in the Middle East.

This is why the accusations that the Federation of Northern Syria is actually driven by Iran, supports the Assad regime and cooperates with ISIS (all at the same time!) are so clearly ‘fake-facts.’ Ask yourself some skeptical questions:

All these forces — Assad, ISIS, Iran, and Turkey — are united on just one point: opposing the growth of home-grown Western-style freedom in the Middle East. But it is only the emergence of such freedom that can save the region from its grim cycle of war, oppression and terrorism.

The Trump Administration Can Save Syria’s Christians

This is why the US needs to act now and act fast. With the Obama administration’s approval, Turkey has moved into Syria with forces who chant anti-American slogans, and boast of driving all Christians out of Syria. Now Turkey wants to attack the Federation with this army, just at the moment when the SDF is surrounding Raqqa, the capital of ISIS. Christian-hating Turkish forces want to destroy the Kurds and Syriac-Assyrian Christians in northern Syria under the pretext of attacking ISIS. On February 13, the Institute for the Study of War issued an urgent warning that Turkey threatens to halt U.S. anti-ISIS operations in Syria.

The Trump administration should see through Turkey’s screen of propaganda that its real allies in the region are the freedom-loving Kurds, Syriacs, Arabs and Yazidis who work and fight together as brothers — in a region too often splintered along tribal and religious lines.