Oahu’s Energy: Irony, Hypocrisy … or Both?

On Oahu’s west side, a Hawaiian green sea turtle snuggles up to a reef for an afternoon nap. But this is no ordinary reef. It’s the warm water outflow structure for Oahu’s biggest electric power producer, the Kahe Power Plant.

Built in the early 1960’s, the 651 megawatt (MW) workhorse often provides over 40% of Oahu’s power. Hawaii being what it is, you are probably imagining Kahe runs on clean, renewable energy. Guess again. Kahe runs on oil.

You read that right, the power plant that draws crystal clear Pacific waters close to shore, while providing a massive artificial reef, runs on 100% oil. Residual fuel oil to be exact. And Kahe is not Oahu’s only power plant running on petroleum liquids. In fact, using data gathered from the U.S. Energy Information Administration (EIA), I estimated that in January 2020, a whopping 72.6% of Oahu’s power generation was from petroleum liquids.

Take solar panels for example. To acquire the silicon used in the panel, quartz must first be blasted out of a mountainside, then smelted using coal. For every ton of metallurgical-grade silicon produced, 5-6 tons of CO2 are produced.

One of the most expensive forms of power generation, a plan was in place to scrap Oahu’s aging oil-fired plants and replace them with cheaper, cleaner-burning natural gas plants. However, that plan was rejected in 2016.

With a goal of 100% renewable energy by 2045, Hawaiian Electric claims that as of 2018, 22% of Oahu’s power is generated from renewable forms. However, my estimates using EIA’s data put that number closer to 13.8%. 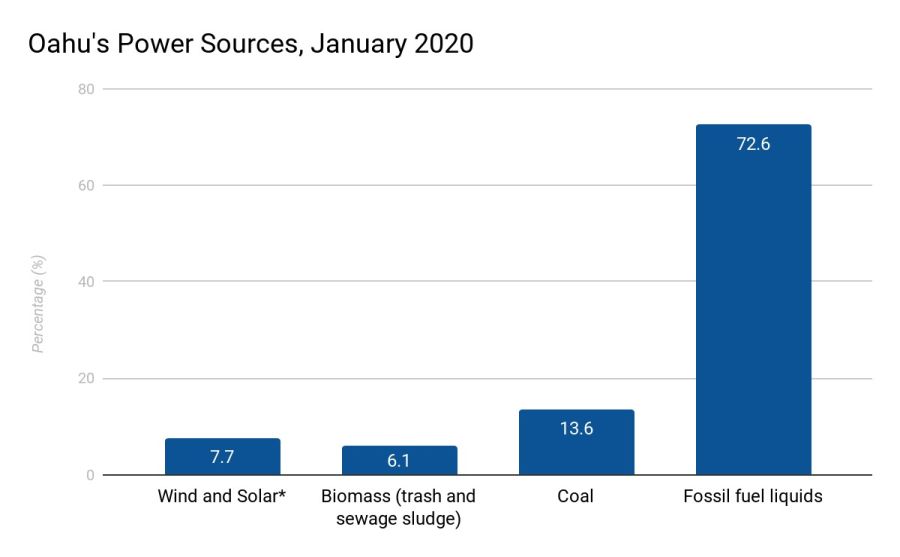 *Wind data estimated from 2018 EIA data (2019 and 2020 not available). EIA does not measure power from household solar, but Hawaiian Electric estimates output is about 1.7 times greater than the amount produced by independent solar companies. The percentage in the chart includes a household estimate.

Where am I going with all this? Well, after reading this article, I watched the film Planet of the Humans (before YouTube censored it). While the film was a little too “doomsday scenario” for me, it was an eye-opener regarding how backwards the green energy movement can be. Especially the anti-fossil fuel mentality and where that is leading us.

Take solar panels for example. To acquire the silicon used in the panel, quartz must first be blasted out of a mountainside, then smelted using coal. For every ton of metallurgical-grade silicon produced, 5-6 tons of CO2 are produced. And this is just the first step in becoming a silicon wafer for a solar panel. Everything, including transporting the panels to their final destination, uses fossil fuels.

Wind turbines and solar panels don’t last forever, either. In fact, those currently operating in Hawaii will have to be replaced, at least once, before reaching Hawaii’s 2045 deadline for 100% renewables. And, how do you recycle a massive, fiberglass wind turbine blade? At the moment, you don’t.

Perhaps the most surprising part of Planet of the Humans was the Green movement’s adoration of biomass for fuel. The word “biomass” is a general term for a surprising array of “renewable” products. Wood chips are a main source of biomass, but woodchips are made of carbon, right? So burning them produces carbon dioxide, right? But isn’t carbon dioxide the same global-warming-crisis-gas produced by burning fossil fuels? Yes.

Confused? Me too. Turns out biofuels, which Oahu’s new Schofield Generating Station is “capable” of using, are produced using fossil fuels.

Back to biomass, those woodchips have to come from somewhere, which means trees, and there are places on the planet where major deforestation is occurring to satisfy the demand.

Did you know “biomass” also means household trash and sewage sludge? Ewwww. Oahu’s H-POWER facility runs off these two products. Plus some fossil fuels. Supposedly, the city gets penalized (meaning taxpapers pay) if they do not provide enough trash to satisfy a predetermined quota. In other words, the system encourages increasing trash amounts. Also, consider the fact that a lot of this trash includes plastic wastes, which are of course produced from fossil fuels. Looking back at the chart, biomass plus coal plus fossil fuel liquids account for 92.3% of Oahu’s power generation, all of which give off greenhouse gases.

Should We Cover One-Third of Oahu with Wind and Solar Projects?

Personally, I’m not completely against trash-burning facilities like H-Power. Run well, they can reduce the size of landfills, which one would think is important on a small island in the middle of the Pacific Ocean. Hence the irony of massive solar and wind projects on Oahu. For example, a quick look on Google Earth revealed the recently-completed Kawailoa wind and solar project sprawls across a whopping 2,900 acres. 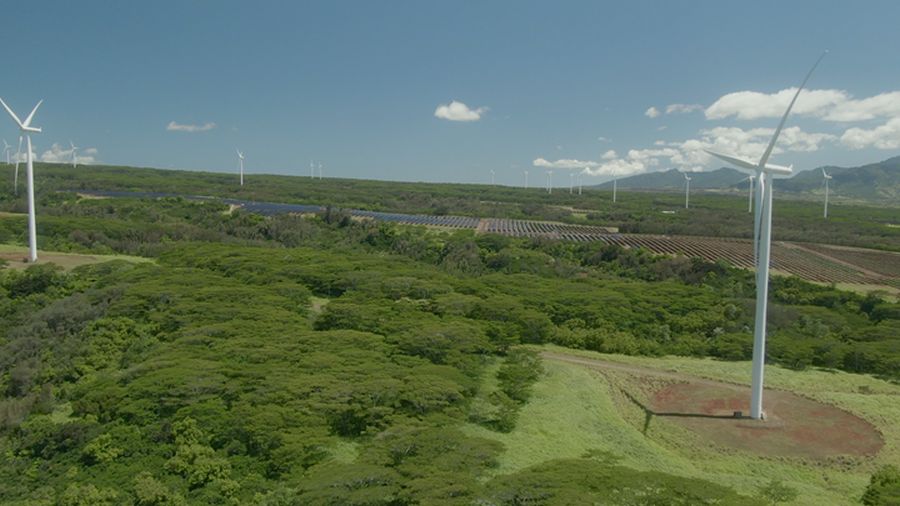 My estimates also show that, on Oahu, generating 1 MW of power using wind and solar requires 154 acres of land. That’s more than 800 times as much land as the Kahe petroleum-fired power plant requires to generate the same amount of power. Using wind/solar projects to produce the same amount of electricity Oahu utilities produced in January 2020 would require a staggering 119,735 acres. Almost one-third of Oahu would need to be covered with solar panels, wind turbines, and battery storage systems.

The Kawailoa project has already been fined at least once for excessive stormwater discharges. On an island where clean and clear ocean water is so valued, perhaps it is time to look again at energy sources that take up less space. Instead of being hypocritical and bashing fossil fuels while using them to meet a politically correct agenda, maybe we humans should focus on being more efficient and creative, developing products that require less energy and materials to manufacture and use.