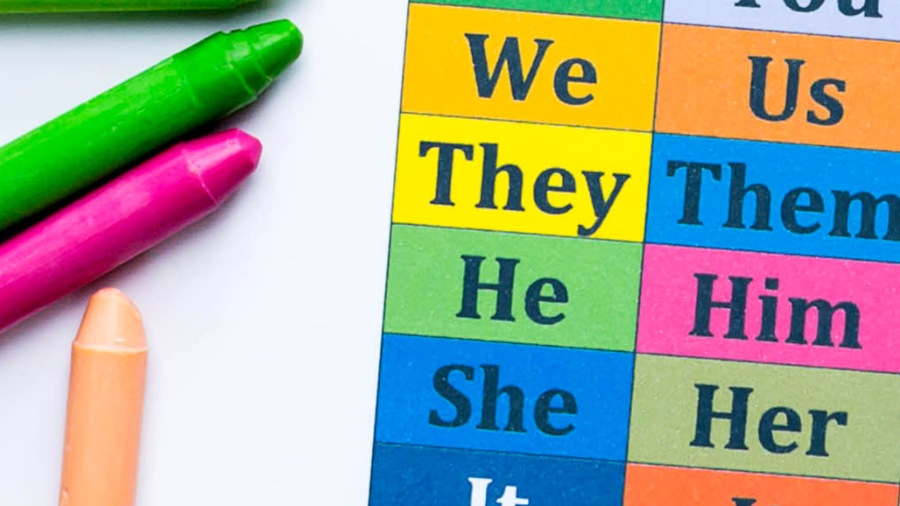 Like most avid readers and writers, I’m a “word person.” I never cease to be amazed at the power of language to clarify, inspire, or persuade. That’s why it pains me to see words twisted in ways that sow confusion, undermine truth, or debase values.

Explicitly Changing the Meaning of Words

Sometimes the distortion of language is explicit, as when dictionary editors expand the definition of a word. For instance, Merriam-Webster recently announced that it has expanded the definition of “they” to encompass individuals who don’t believe they are either male or female.

Here’s the problem: “they” is plural. Using it to refer to “a single person whose gender identity is non-binary” makes a mess of English grammar. Consider the sentence, “Sally’s parents were still angry when they left the house.”

When we apply the new definition of “they,” all clarity is lost.

Note that if that the speaker wants to communicate what the statement would always have been understood to mean until now, he is forced to re-phrase. Now he must say, “Sally’s parents were still angry when Sally’s parents left the house.” Otherwise “they” might be referring either to Sally or to Sally’s parents.

More often, word-twisting is gradual; incremental. Like frogs comfortable in a pot that starts with lukewarm water, we don’t even notice the little changes in our language environment until our values have been boiled alive.

The word “love” is a good example. Its clearest definition is found in the Bible. Love is wanting and doing what is best for the beloved. It is all choice (I choose to behave this way toward you, no matter what) and action (I behave this way regardless of my feelings at the moment).

In today’s world, however, “love” is pure emotion. It’s all about fondness and desire. If it involves action at all, the action is to cause immediate pleasure to the beloved. Today’s “love” requires smiling acceptance of all attitudes and behaviors, no matter how misguided, factually incorrect or morally wrong.

By today’s standards, a girl “loves” a boy if she desires his company and feels physical attraction to him. A parent thinks he “loves” his child if he encourages the child in “transitioning” to the opposite sex. Or allows unlimited access to smartphones and video games.

Today’s “love” is not one that can weather difficult conflicts, speak hard truths, or abide by moral absolutes. It must ever give way to emotions and desires.

We should pay careful attention to the distortion of words that describe God’s character, and thus define the character to which Christians aspire. “Meekness” is a good example. We hear about “Gentle Jesus, meek and mild,” and assume that meekness and mildness are synonyms; that Jesus was some kind of a pushover, and that we, too, should be pushovers. Perhaps that is why so many of us give in to re-definitions that turn our world’s most fundamental virtues upside-down.

When Jesus said, “Blessed are the meek, for they shall inherit the earth,” he wasn’t urging us to be timid or weak. Real “meekness” has nothing to do with weakness. Jesus was using a term of art. He was, in fact, using a war term.

In the case of many words being distorted today, giving in to their new definitions would be weakness — not meekness.

The word Christ used was the Greek word “praus,” and it was the term used for war horses that had been trained to exercise their strength with discipline, under their riders’ control. Far from turning away at the first sight of conflict, a horse that had been “meeked” would run straight into the canon’s fire if the battle required it.

Once we realize what’s at stake when our culture seeks to re-define words to fit its ideology, we are faced with a choice. Do we want the “they” that brings clarity — or confusion? Do we want the “love” that is fleeting and mushy, or the “love” that is purposeful and committed? In the case of many words being distorted today, giving in to their new definitions would be weakness — not meekness.