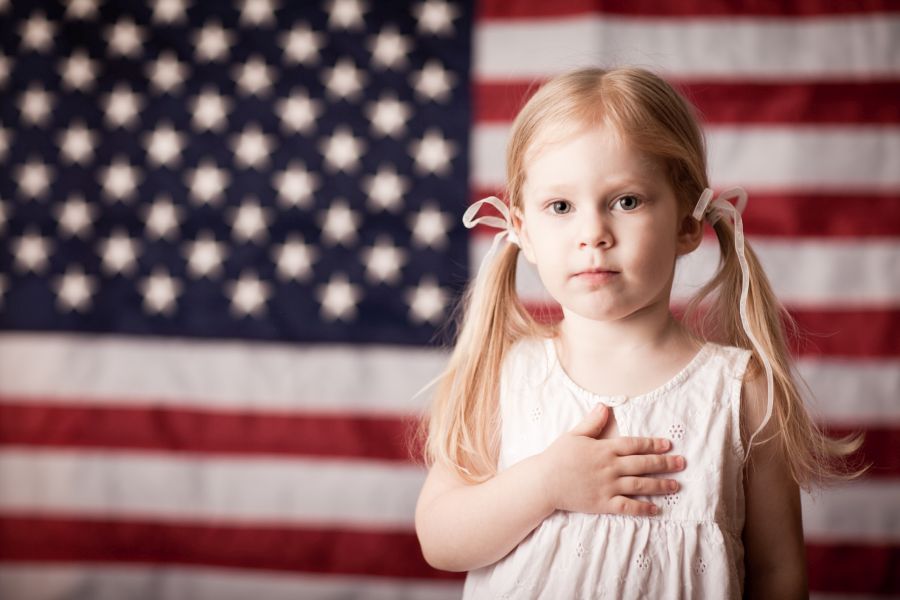 It’s true that the Pledge of Allegiance was not written until 1892. And it’s true, that, in its original form, the pledge did not include the words “under God.” Those words were not added until 1954 under the Eisenhower administration. But, putting the Pledge of Allegiance aside, if we are not one nation under God, there cannot be liberty and justice for all.

The words “under God” came to national attention this past week when participants in two panel discussions at the Democratic National Convention left them out of their pledge recitation. (The pledge was recited in full at the full convention meetings.)

Without Recognizing God, There is No Liberty or Justice

Regardless, though, of that controversy, the fact is that without a recognition of the reality of God, there will not be real liberty or justice for all Americans. That’s because human nature wants to dominate, to rule, to take advantage of others. Human nature is selfish, and “love your neighbor as yourself” does not come naturally to us.

This is why our Founding Fathers wrote, “We hold these truths to be self-evident, that all men are created equal, that they are endowed by their Creator with certain unalienable Rights, that among these are Life, Liberty and the pursuit of Happiness.”

These truths were only “self-evident” to the extent that there was a benevolent and just Creator. Without Him, this entire sentence, which forms the philosophical lynchpin of the Declaration of Independence, disappears.

Founding Father Samuel Adams went as far as claiming that the rights of the colonists “may be best understood by reading and carefully studying the institutes of the great Law-giver and head of the Christian Church [Jesus], which are to be found clearly written and promulgated in the New Testament.”

Our “rights” flow from above. Otherwise, we have no real “rights.” It is merely a battle for survival of the fittest.

Our Values Flow From Biblical Values

And despite our many failings as a nation, both in the past and the present, the ideas that made America great, the ideas that truly enabled us to become “the land of the free and the home of the brave,” were ideas based on biblical principles and Judeo-Christian values.

Our freedom and equality are “entitlements” based on “the Laws of Nature and of Nature’s God” says it all with precision and clarity. That’s why our founders appealed “to the Supreme Judge of the world for the rectitude of our intentions” and that’s why they expressed “a firm reliance on the protection of Divine Providence.”

As Samuel Adams wrote, “A general dissolution of principles and manners will more surely overthrow the liberties of America than the whole force of the common enemy. While the people are virtuous they can not be subdued; but when once they lose their virtue they will be ready to surrender their liberties to the first external or internal invader.”

And that “general dissolution of principles and manners” will continue to grow unless we recover a healthy consciousness of a just, holy, and benevolent God.

Again, I freely acknowledge that we have not always lived by these God-centered principles, beginning in the days of the colonies. But to the extent we have lived by them, we have set captives free and procured justice for all.

Ten years ago, my good friend Rabbi Shmuley Boteach proposed that we debate the question, “Is Homosexuality America’s Greatest Moral Crisis”? I told him that I was happy to debate the issue of homosexuality and homosexual activism but that I didn’t believe it was America’s greatest moral crisis. Rather, I believed it was the lack of the consciousness of God that was our great moral crisis, both in the Church and in the society as a whole.

And that reminds me of a famous account involving the first-century Talmudic rabbi, Yochanan Ben Zakkai. When he lay dying, his disciples came to him and said, “Our teacher – bless us!”

This surprised his disciples, who said to him, “Is that all!?”

He answered, “If only it were so! Know that when a person transgresses, he says, ‘May no man see me.’”

And this, in turn, reminds me of another, traditional Jewish saying: “Apply your mind to three things and you will not come into the clutches of sin: Know what there is above you: an eye that sees, an ear that hears, and all your deeds are written in a book.” (Pirkei Avot 2:1).