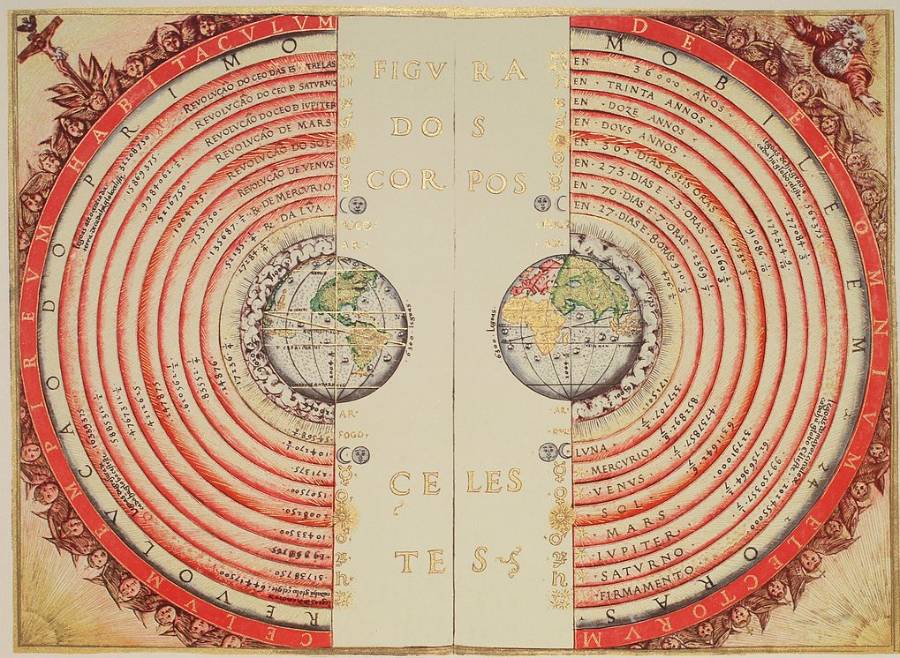 Portuguese cosmographer and cartographer Bartolomeu Velho published this illuminated illustration of the Ptolemaic geocentric conception of the universe, called "Figure of the heavenly bodies," in 1568.

In episode 8 of the new Cosmos season, “Possible Worlds,” host Neil deGrasse Tyson spreads fake history. I’m talking about the claim that astronomer Nicolaus Copernicus (1473–1543) demoted humans from the center of the universe. This supposedly challenged the religious idea of human importance. “Demoting the earth from the center of the universe was a severe blow to human self-esteem,” Tyson claims on the episode, which aired on April 30.

Tyson is among the many promoters of this falsehood. Atheist Christopher Hitchens, for instance, called Christianity’s earth-centered view its “greatest failure.” But in this case the atheists failed to do their homework. I break it down in my book, Unbelievable: 7 Myths about the History and Future of Science and Religion.

Copernicus argued against earth-centered astronomy, but he didn’t think this challenged Christianity. He even once said that God had “framed” the cosmos “for our sake.” Copernicus was not alone in this opinion. Most other early supporters of sun-centered astronomy thought the Bible and science are in harmony.

This makes sense of what Galileo wrote in the century after Copernicus. He said: “I will prove that the Earth does have motion … and that it is not the sump where the universe’s” filthy things “collect.”

The idea that Copernicus demoted humans was invented in the mid 1600s to bash Christianity. By the mid 1800s the myth had entered astronomy textbooks, and by the 1960s it had become the majority view.

The latest version of this story in a college textbook might surprise you. It is built on the view that exotic dark matter is more common than ordinary matter. “It is interesting to consider how far we have moved from our Earth-centered view,” write Stephen Schneider and Thomas Arny. They claim that our cosmic location is not special, despite recent evidence otherwise that they ignore. They continue: “And now we are realizing that the kind of matter that makes up everything we know is just a minor kind of matter in the universe. This is the Copernican revolution taken to extremes!”

This is subjective storytelling, not science. One could just as easily have declared humans unimportant because our bodies are mostly common, ordinary hydrogen, oxygen, and carbon. “See, there’s nothing special about the material me!” Thus, one could make use of either the commonness or rarity of our material parts as grounds for our unimportance. Humans are losers either way: heads or tails. It’s a rigged game, not a serious argument for a godless view of life and the cosmos.

Some atheists attempt to salvage some meaning and specialness from the Copernican “demotion.” Consider a recent book by Neil Tyson. He argues that despite a series of scientific discoveries humiliating humanity, there’s hope without God. We can still find meaning and purpose. How? Because “the cosmic perspective is spiritual — even redemptive — but not religious.” Science is our savior!

Tyson insists the Copernican demotion story redeems us from religious ignorance. He writes: “The cosmic perspective opens our eyes to the universe, not as a benevolent cradle designed to nurture life but as a cold, lonely, hazardous place.”

Tyson’s Cosmos series will broadcast this spiritual atheism to middle school and high school. How so? Darwin is said to be the “greatest spiritual teacher of the last 1000 years.” He “worshiped nature,” Tyson proclaims approvingly. “Life is an emergent property of chemistry. Science is an emergent property of life. Life can begin to know itself.” In episode 7 Tyson shares his strange belief that bees and trees can think much like us. But, of course, they can’t do science! So we are special after all in the spirituality of the new cosmic atheism.

We figured out we’re insignificant — if we confuse significance with size and being in the center. And this somehow makes us significant?

This is a dead-end path and, once we’ve done our homework, an Unbelievable one.