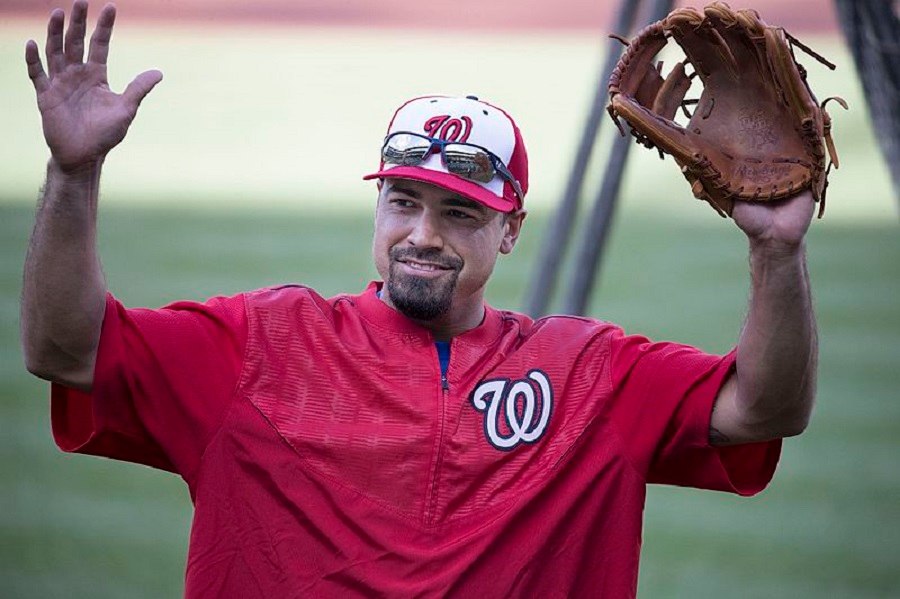 Washington Nationals third baseman Anthony Rendon smiles before a baseball game against the Baltimore Orioles on May 8, 2017, at Oriole Park at Camden Yards.

“Man, I think I understand that there’s bigger things going on in this world,” the 29-year-old star said with a smile. “And my savior Jesus Christ gives me that patience and that slow heart rate.”

As if Rendon’s remarks couldn’t be any more humble and enlightening, the Nats superstar went on to remind ESPN viewers who the real heroes are.

My savior Jesus Christ gives me that patience and that slow heart rate.”

“It’s better than taking bullets for your country on the other side of the world,” Rendon said. “So this should be a breeze for us.”

Rendon, who had several clutch hits during his team’s Cinderella playoff run, has seen the sacrifices of American troops and veterans up close. Since arriving in Washington, the ball club has made frequent visits to the nearby Walter Reed National Military Medical Center in Bethesda, Maryland.

Anthony Rendon and a group of other #Nats players and coaches visited the Walter Reed National Military Medical Center today.

Rendon is a Houston, Texas, native who played collegiate baseball at Rice University. As an Owl, he once hit a home run while playing at Minute Maid Park, home of the Houston Astros. Years later, he would do so again on the sport’s biggest stage: Game 7 of the World Series.

Rendon is not only celebrating his team’s first world championship, but is poised to become one of the highest-paid players in Major League Baseball as a pending free agent. Wherever he ends up, Rendon and his loved ones will be set for life. It’s nice when good things happen to good people.

Washington’s stunning World Series victory will be celebrated with a Saturday parade down Constitution Avenue and a Monday White House visit hosted by President Trump. As a Nationals fan since their move to the nation’s capital from Montreal was announced, I will never forget the thrills and jubilation of the 2019 season.

Like Anthony Rendon, I believe in Jesus Christ and the power of miracles. That’s exactly what unfolded this October.