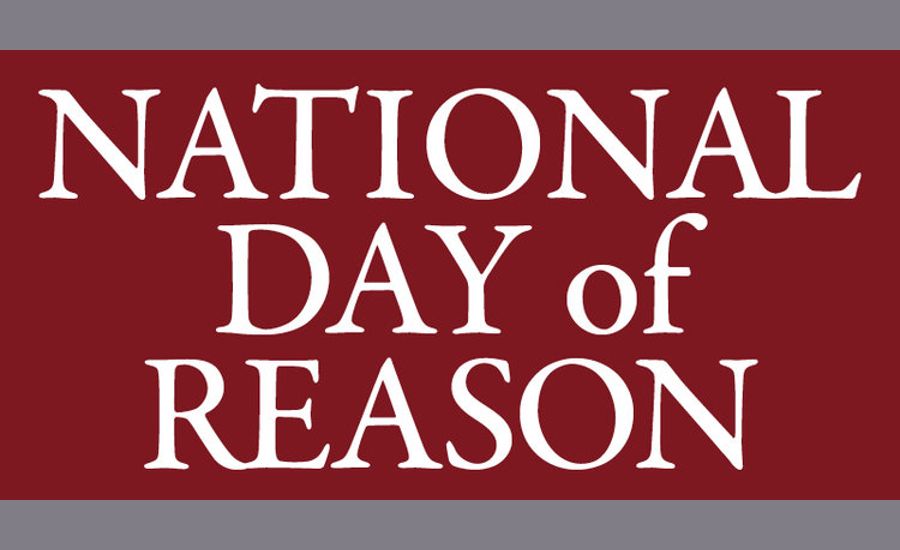 It might have bothered me that a congressman had introduced a resolution again this year for a “National Day of Reason” on May 7. It might have bugged me, too, that the Freedom from Religion Foundation wanted to claim it would “offset” the May 6 National Day of Prayer. It could have, except I read the resolution, and I broke into laughter instead. Seriously, it’s hilarious. I mean, if anything can be “seriously hilarious,” this is it.

So, what’s so funny about atheists trying to stand up to a Day of Prayer, you ask? First answer: It’s their feeble reasoning, stacked up against God’s prayer-answering power. Secular Sam thinks he can swing a sword at a tsunami, and he doesn’t even know how to sharpen it.

Sorry, but yes. They’re proving it themselves. Have you seen how the atheist movement has fractured? Follow Mike Gene’s Shadow to Light blog. He chronicles it all, and if you don’t mind hearing about your enemies tearing each other to shreds, it’s pretty entertaining. Most recently it’s top atheist blogger Hemant Mehta attacking the 21st century’s most visible atheist, Richard Dawkins, but that’s just the latest; there’s tons more where that came from.

We Christians have our divisions, but we’ve made it through a thousand years with them. I’ve often said there must be a God; the Church never would have survived her own people otherwise. I’m not joking, either. And yet she thrives, and has also done enormous good through the centuries. We’re talking the power of prayer here. Nothing else could explain it. 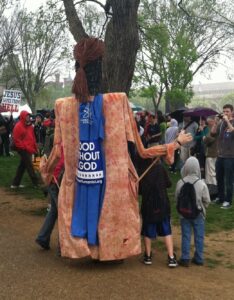 They Think It’s Offsetting the Day of Prayer? Hah!

I could have burst out laughing just on that alone, and you might say I’d be in good company. But it’s nowhere near all of it.

Nope. Joke’s on them. In fact, I’m marking my calendar. I’m going to celebrate this Day of Reason myself! There’s hardly a word in there that doesn’t support the best of Christian thinking.

I could quibble over some emphases, sure, like this one: “The application of reason has been the essential precondition for humanity’s extraordinary scientific, medical, technological, and social progress since the modern Enlightenment.” It’s as if there’d been no progress before the Enlightenment. Not true; not even close. (And I’ll bet you thought reason meant paying attention to all the relevant evidence. So did I.)

The resolution also acts as if the application of reason were the only essential precondition for all that good in the world. Not true either. It takes community cooperation, a commitment to honest dealing, and (how’s this for starters?) a rational, ordered universe to begin with. Christianity explains and supports all that. Atheism says we got here by chance, and any morality we have is the by-product of whatever it took our ancestors to make more babies who made more babies. Reasonable? Ri-i-ight.

But I’m in a merry enough mood. I don’t mind overlooking that and a few other mindless mistakes. Like their breathless blaming of “magical and conspiratorial thinking” and “disbelief in science,” which they say contributed to “the death of more than 555,000 people in the United States.” My guess is it’s contributed to a few of those deaths; not nearly as much, though, as the unbalanced, politicized “science” we were supposed to follow in order not to get labeled “science deniers.”

The Funniest Part? They Think They’re Good At It!

So yes, it’s wrong and it’s unbalanced, but let’s not overlook the spirit of the thing: Reason! Which leads me to the funniest part of it all: They think they’re good at it! 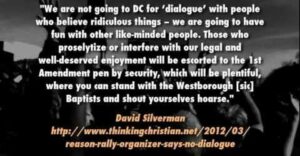 They’ve been claiming it for years. Richard Dawkins has his “Foundation for Reason and Science.” Sam Harris co-led “Project Reason.” I was at the atheists’ Reason Rally in 2012, where Tim Minchin sang a densely argued, logic-centered song in which he … no I was messin’ with you there.

Yes, he sang a song. It happened to be about the pope. Yes, it was at a so-called “Reason Rally.” And it was definitely reasonable. Or it was, if you count 70-plus instances of the f-word great philosophical discourse. (Someone else counted them, not me, but I was there and I believe it.)

Ah, the memories. David Silverman, head of American Atheists, trying a full-on power play on me and the Ratio Christ group I co-led there. Now, that’s reason in action! Our lawyers said it was safe to ignore the threat, so we went there anyway, handing out copies of the first chapter of my co-edited book True Reason. An excerpt from that same chapter here tells more of why I don’t think highly of atheist “reason.”

Want more? There was the fellow at the Reason Rally who said he was more interested in donkeys than the Resurrection. There’s Richard Dawkins being unsure whether Hitler was all that wrong (1:27 here). And dozens more. Honestly, you try to explain things to them, and this is how it feels:

Yet they want to claim a “Day of Reason” to “offset” the Day of Prayer. Great! Let them reason. Let them think on who developed Western science, all of whom were believers, many of them clergy. Or let them just try keeping up with Boethius, Augustine, Aquinas, and all the great Christian thinkers up to Alvin Plantinga, Timothy McGrew, and many, many others today.

I’ll join them for their Day of Reason! Let them reason! Please, dear God, let them reason. Think how refreshing it would be for a change!

I’m not sure how you observe such a day, though. Logic parties? Philosophy lunches? Whatever it is, I’m down for it. I’ll even quote an invitation Someone else first made long, long ago. “Come now, and let us reason together.” It’s out of context, I know, but if you’ll allow me grace for that, I think it still makes a lot of sense.