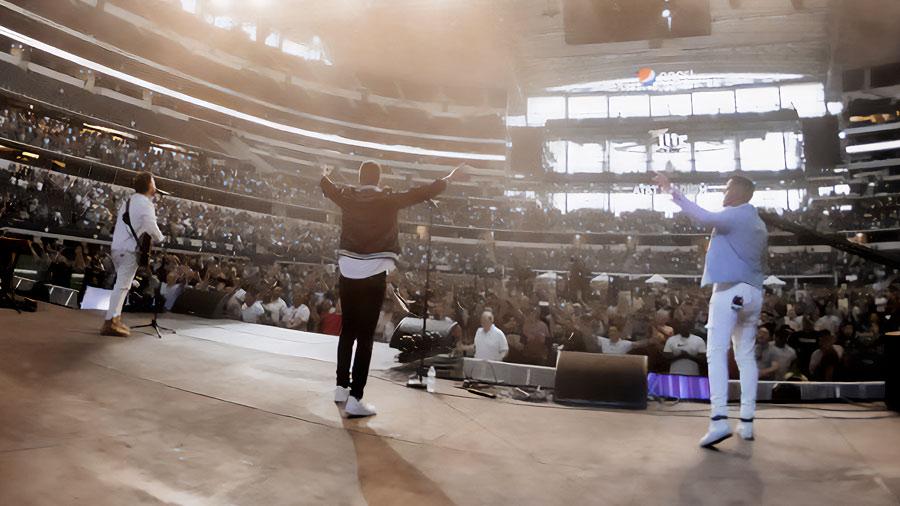 With tens of thousands of men from all over the country attending, the Promise Keepers conference seemed the ideal Petri Dish to explore what was going on inside local evangelical churches.

If you’re a church-going Christian or keep up with the world of modern Christendom through its various media organs such as Christianity Today or the Christian Post, you’ve been peppered with stories since January, including from some well-known Christian voices, about how the Church — especially the “evangelical” wing of the faith — is in crisis!

The Church, we’re being told, is being overrun with white, Christian nationalists and white supremacists! These nationalists and supremacists are demanding fealty to — you knew it was coming — Donald J. Trump! Some claim that “It’s a ‘war’ for the faith, tearing the universal church apart!”

Backing into these arguments are the “Never Trumpers,” a cadre of self-proclaimed “conservative” and “Christian” talking heads, writers, and politicians who wear their self-anointed moral superiority like a teenage girl does her first prom dress.

Of course, the ultra-radical, totalitarians-in-training that now control the national government and the corporate media-entertainment complex are feasting off the story line of the “crisis.” It fits their crusade to destroy anything to do with the historic national ethos based mainly on the “faith of our fathers.” The radicals merely quote the critical “Christian, conservative leaders,” asserting that a “Trump cult is hijacking the American church.”

What is a Nationalist? What is a Supremacist?

It’s effortless to conjure up this nonsense — because there are never any definitions given for Christian nationalism or white supremacy. What is a nationalist? What is a supremacist? If you love the country, or if you love the Constitution, are you a nationalist? Or, if you believe that God, not the government, ordains human rights (like the Founders), are you a Christian nationalist? A supremacist if you support controlled, legal immigration policies? If you believe in traditional values, personal liberty, free markets? What are you then?

Given this test, of course, you quickly discover the game afoot — it has nothing to do with nationalism or race — it’s about political power for Marxist radicals. It’s a vile lie that accomplishes personal goals for many who we assumed were people of integrity, courage, and faith — only to find them revealed as Christian charlatans. If they weren’t in the professional Christian world but in Las Vegas instead, they’d be card cheats.

White and Christian nationalism and supremacy are merely the verbal jackhammers used to help disassemble the Church and the Republic. You can’t radically transform The United States of America into a socialist hellhole unless you first wholly destroy the foundation of its moral order that has created the freest, most generous, most equitable, most economically prosperous nation in human history.

Having been reasonably well plugged into the “evangelical” movement across the country in various ways for many years, I was suspicious of the claims that God’s church had suddenly fallen into cultism and Christian nationalism, whatever that might be. I’ve not run into this crowd in my extensive travels or experiences. None. Nor can I find anyone who personally can give anything but sketchy evidence of “a person” or “a family” that they claim are adherents of Christian nationalism. It’s like tracking down Bigfoot — there’s a lot of alleged sightings but scant evidence.

[I’ve had people send me reams of material from groups they consider to be Christian “extremists.” These usually turn out to be people or groups who spend their energy warning about the coming “end of times” using the book of Revelation or others who are into examining the often tricky nooks and crannies of Bible prophecy. However, an extremist is not someone with whom you might disagree about an interpretation. Nor is it extremist to see a pattern in history. But, it is extremist to label someone extremist just because you don’t like or understand what they say.]

I’d never claim that Christian nationalists or supremacists don’t exist inside the Church at all. I’m sure there are some. But I’d state categorically, based on my knowledge and experience, that we’re talking about a minuscule number of people — assuming we could agree on definitions. After all, the Church, just like politics, journalism, medicine, big tech, academia — any field — has folks following the parade at a distance that could charitably be called screwballs. They live to glom on to the shirttails of others, and they like to cause an itch. It’s the way the world works.

And, the conflation of politics with the Cross of Christ is nothing new either. The road to the crucifixion began with political show trials — it was against first Jewish law, and at the end, against Roman law as well. It didn’t matter.

All of which brings me to the venerable Promise Keepers organization, a national evangelical movement of men in the 1990’s pledged to renewing themselves to Biblical integrity, serving others as godly husbands, fathers, and leaders. (In 1997, PK held a rally on the National Mall in Washington, D.C., estimated at 800,000 to 1 million men, one of the Mall’s largest rallies in history.)

For the first time in many years, PK held an event this past weekend in the massive AT&T Stadium complex in Dallas, Texas, home to the Dallas Cowboys. With tens of thousands of men from all over the country attending, the PK conference seemed the ideal Petri Dish to explore what was going on inside local evangelical churches. To identify and find the elusive nationalist or supremacist.

I made arrangements to arrive early on Friday afternoon for the two-day event. I spent much of the afternoon and evening casually talking to dozens of men of all ages and ethnic backgrounds (almost half were African-American or Latinos). My objective and questions were straightforward. I wanted to hear from ordinary men about what they saw in their local churches. How were race relations in their community and church? Had they encountered Christian nationalism or white supremacy in their congregations? Was politics centered on ethnicity or personality in their church? Finally, how was their church doing in talking about race?

The key takeaway is simple; not one person I talked to at the PK conference knew or had heard a Christian nationalist. Nary a one. Nor had they seen or come in contact with a white supremacist. To a person, regardless of ethnicity, they believed race relations in their church and their community broadly were better than they were ten, twenty, or thirty years ago, not worse. Also, these participants thought their church was doing a “good job” discussing race.

One other consistent theme was best stated by James, an African-American man in his early fifties who said that race relations were “much better than they were thirty years ago.” He attends a bible church that has a mixed ethnic congregation; “Here’s what we believe and what we live, we’re all moving forward in the love of Jesus.” James had brought his adult son and brother to the event, all of whom nodded in agreement.

Gary, a tall, rugged-looking white man in his sixties, brought his adult son with him for the weekend. He was eager to talk about his church with a “reasonably” mixed congregation and their experience during the elections. “There were different opinions [but] everyone was united in Christ. See, we preach that the things of the world don’t mean that much, but the things of God mean everything.” Gary’s son attends a different church in another city but added that his church rarely talked politics “but talked a lot about the collapse of values and family,” and that only the “Gospel of Christ could change a person’s heart or the country’s destiny.”

Talking to a couple of dozen men in a sea of thousands or a country of millions doesn’t provide evidence. It doesn’t set a pattern or prove a point. But, like tasting a dish cooking on the stove, it gives you a flavor.

I had met Sal and his family in the parking lot early on Friday afternoon, long before the event started. Three generations pilled out of a huge extended cab Ford pickup truck led by Sal, 79 years young — still a fit and strong man. His two tall sons and their own two children were eager to talk. They were a Mexican-American family from the Texas valley near McAllen. They were excited that they had made the long trip to Dallas to be with thousands of other Christian men. Sal beamed with pride at this family and told me that in his mixed church, the priority was on advancing “God’s agenda.” He smiled when he said to me that his Bible Church had an “Anglo pastor.” He added, “I’ve learned that what a man looks like doesn’t matter. What he says and what he does is what matters.”

Another attendee, Cass, said to me, “We got boys pretending to be men in the country now. Too many [men] never grow up. They talk about race, but they don’t believe in people. Race is just something to be mad about. We need men to come back to what God called us [to be]. When that happens, there isn’t any race that matters. Kingdom men care about every person because God made ’em. Kingdom men see with the King’s eyes.”

The Answer to America’s Unrest

The vignettes from these men I talked to were sweet and bathed in goodness. They are refreshing in a cynical society consumed with itself. John is a New Mexico native who drove to Dallas. In his thirties, he grew up in a single-family unchurched home. He was a bitter and angry youngster by his own account and ended up in the U.S. Army. A fellow soldier invited him repeatedly to church, even though he was African-American. When he finally accepted the offer, he heard the Gospel for the first time, and his life has never been the same. “The problem isn’t skin color or anger,” said John. “The problem is that the culture has drowned out God. It doesn’t fear God.”

Talking to a couple of dozen men in a sea of thousands or a country of millions doesn’t provide evidence. It doesn’t set a pattern or prove a point. But, like tasting a dish cooking on the stove, it gives you a flavor.

To a person, the men I spoke to are worried about the country, concerned about Washington, and understand that the rights they have taken for granted for so long and the faith they carry — are all under assault. But, most of all, they understand that the answer to America’s unrest does not now, nor has it ever, relied on man’s efforts, but on men’s hearts. What I heard and saw during the conference was focused outward — focused on the importance of men being men. Kingdom men. God’s men.

Originally published at The Bull Elephant. Reprinted with permission.