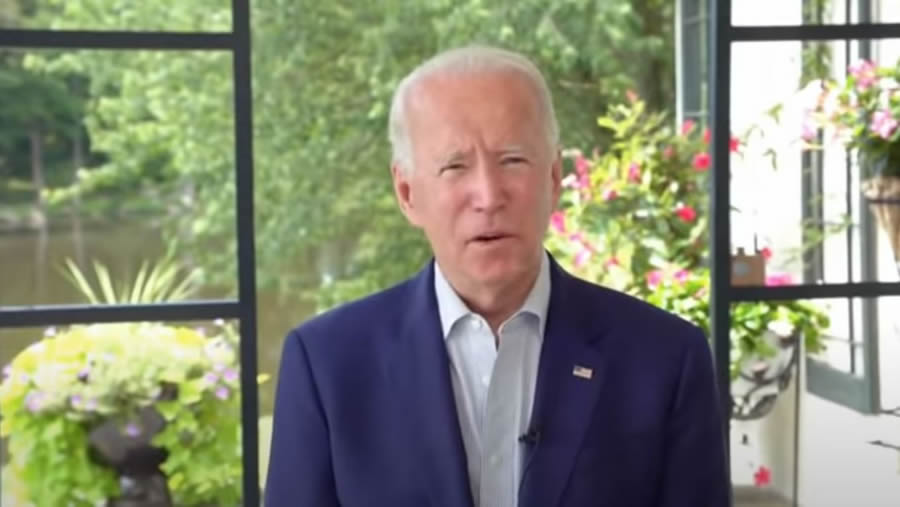 Yesterday Democrat Presidential candidate Joe Biden remotely addressed a gathering billed as the “Million Muslim Votes Summit.” Biden called for that 1.1% demographic to help end the horrors of President Donald Trump’s administration. These include an ongoing “assault on black and brown people,” “vile Muslim ban” and overall “Islamophobia.” The former Vice President to the most pro-Muslim President in American history went further. Mumbling toward Mecca, Joe said the following. “I wish we were taught more in our schools about the Islamic faith. …It’s one of the great confessional faiths and what people don’t realize is one of my avocations is theology. Don’t realize is that we all come from the same root here in terms of our fundamental basic beliefs.”

Lies, Damned Lies and Statistics about Race and Immigration

I shall address lay theologian Joe Biden’s pontificating on Islam in a bit. First, let’s examine his other claims — no doubt written by a 20-something staffer with an Ivy League degree and absolutely no knowledge of Islam. Or much else, beside political pandering. Black Americans must have missed that memo about Trump’s assault on them: as of last month, his support in the African-American community was up to 40%. Likewise for “brown” folks. Almost one-third of Hispanics say they support the President. (And that was before the Left decided to trash Goya products, which backfired on them.)

Maybe Trump’s violence against the darker-skinned is reserved for immigrants and refugees? Well, the most recent data shows the US accepting 1.1 million refugees yearly. Where do most of them come from? The top countries are Mexico, India, China and the Philippines. Three of those four populations have skin hues acceptable to Biden and the DNC. But surely Herr Trump discriminates against refugees with higher melanin levels? Not so fast, my liberal friends. In 2019 Trump showed his hate for black folks so much that his administration let in more people from the Democratic Republic of Congo than anywhere else. This was followed by Myanmar, Ukraine, Eritrea and Afghanistan. Do the math, Democrats.

Yet More Lies about Muslim Statistics

Perhaps Joe’s handlers were trying to say that all Muslims are black or brown. Well, only 1 in 5 of US Muslims is black, and a large percentage of immigrant Muslims come from Iran. I demolished this common ignorant intersectional trope some years back. Yet they still keep trotting it out. I’m surprised Sycophantic Joe didn’t tell his Muslim listeners that the GOP was going to put them back in chains. Speaking of “vile,” that more accurately describes the Dhimmi Dems’ constant lie that Trump banned Muslims. In fact, his list of interdicted countries comprised only 12% of the Islamic world. And it was upheld by the Supreme Court — which of course is probably racist according by current DNC standards, too, since it does have some white judges.

Now, to the deeper allegations by that eminent lay doctor of the Roman Catholic Church, St. Somnolence. To be fair, his assertion that Islam is a “great confessional faith” and his implication that Christians and Muslims share “fundamental basic beliefs” is not wildly out of line with ecumaniacal post-Vatican II teachings in the world’s largest Christian body. Some 1.6 billion people confess that “there is no deity but Allah, and Muhammad is his messenger.” (Only Christianity has more adherents.) So it’s certainly a “great” faith in terms of numbers.

And Joe’s teleprompter is correct that the world’s two largest faiths do have some surface commonalities. These include monotheism, many of the same prophets, a similar eschatology, and Jesus. But the Jesus of Islam is not remotely the same Person as in the New Testament and the Church. The Muslim `Isa rejected the Trinity, denied his own divinity and was not crucified. Thus, He was not resurrected. So disregard those Islamic billboards that proclaim, “We ♥ Jesus.” They are proclaiming love for a prophet who plays second fiddle to Muhammad and the Mahdi. And whose mere mortal life atones for no one — not even himself.

I’m a Christian but have studied Islam and Islamic history for almost 30 years. Unlike some conservative Christians, I do think that the Islamic world has produced great civilizations — in terms of affecting history. The Ottoman Empire certainly qualifies in this regard. Those who dismiss that 500-year long polity as merely ISIS writ large are frankly ignorant. I even think there is good to be found in Islam, albeit largely as a by-product of what Muhammad and later Muslims imbibed from Christianity.

But Islam is not simply Christianity Lite. There are undeniably darker elements to it, starting with Muhammad himself. Islam’s founder led armies in battle, ordered enemies beheaded, and had at least a dozen wives. And one of them, `Aisha, was a mere child. The Islamic world enslaved millions, and its slave trade continued long after the Transatlantic one ended. Jihad, decapitation and child marriage are still practiced in Islam by legions who take the Qur’an, Muhammad’s life and his Hadiths (alleged sayings) literally. Some Muslim countries still allow virtual slavery. Every place in the world that mandates the death penalty for homosexuality is a Muslim one.

Teach Islam — but Teach the Truth

So I agree, Joe: Schools should teach about these topics but not promulgate — as far too many high school and even college teachers and textbooks do — the propaganda that Islam is purely “peaceful” and that Muhammad was a bearded Buddha. But your party prefers keeping its people in chains of intersectional ignorance.