"We crammed an entire lifetime of love into that one week that we had with her." 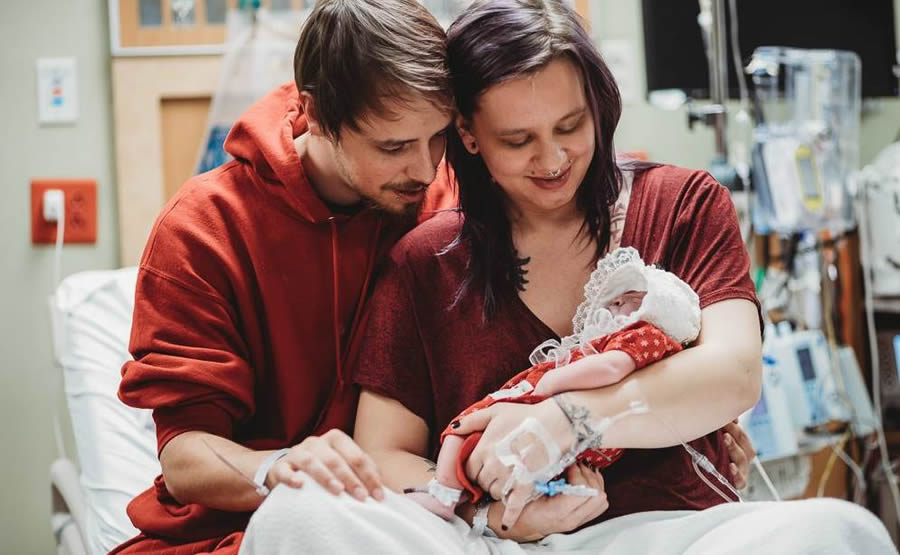 “It’s like we’re keeping her memory alive through talking about her, sharing her story with other people.” Krysta Davis talked to The Stream about her daughter, Rylei, who lived one week after birth.

Doctors diagnosed Rylei with anencephaly when her mom was 18 weeks pregnant. It is a fatal diagnosis. Babies who have the defect don’t have part of their brain or skull. Most babies with anencephaly don’t survive past birth. At most, doctors told Krysta, she’d have 30 minutes to hold her precious baby after she was born.

A high-risk OB/GYN gave Krysta and Rylei’s dad, Derek, two options. Krysta could choose to induce and have the baby then or carry her to term. It wasn’t much of a choice. In any event, their baby would not survive.

‘This is What We Are Going to Do’

The couple decided to carry Rylei to term. “Because, in the end, I’d much rather be able to hold my baby at full term than having this teeny tiny little baby at 20 weeks,” Krysta explained. “Plus, I wanted to give her whatever chance she might have for us to be able to spend some time with her if she was born alive.”

Krysta and Derek got a second opinion. They were given the same diagnosis, but this time they were told if Krysta carried Rylei to term she’d be able to donate the baby’s organs. “We kind of just looked at each other,” said Krysta. “We were like, you know, this is what we’re going to do.

A Lifetime of Love

Rylei was born on Christmas Eve. Just as the doctors predicted, Rylei had anencephaly. But unlike what doctors said, Rylei didn’t die right away. Her parents were able to cuddle their daughter for a week. “It was absolutely amazing. There are no words to describe how great it was to go from hearing that we may be able to get little to no time with her, to having an entire week with her. We crammed an entire lifetime of love into that one week that we had with her. She was all smiles.”

Rylei was a sweet baby. She didn’t cry at all until her last day. As her oxygen levels began to drop, she let out a little cry. “It was like she was fighting to give us more time in the end.” Then she was gone.

Rylei donated two heart valves and her lungs. Two babies were the recipients of her gift. Krysta hasn’t met their families yet, but she wants to. It’ll be a while before she can. “They told us it would take about 6 months for everything to go well with the transplants for the other babies, for their bodies to grow accustomed to the tissue that they’re getting.”

Krysta hopes to bring awareness to the importance of organ donation. She and Derek have already started. The couple spoke at Tennessee Donor Services’ flag-raising ceremony a couple of weeks ago. The ceremony honored organ donor families. Through Rylei’s Facebook page, they’re also helping others. “Her page has become a platform for [other moms] to be able to speak out and tell their stories. And it’s great that so many people have been educated about anencephaly as well.”

This is Rylei’s story, Krysta pointed out. “She’s the one who stuck it out for a week with us. She was a little warrior the whole time. She was able to give other people hope that there are people out there in the world like us who want to be able to see other mothers bring their babies home through organ donation. No one really deserves to feel that emptiness of losing a child.”