Fred Rogers, an ordained minister studied in music composition and psychology, changed the world one child at a time for decades on public television. Now he’s helping adults with a new film. 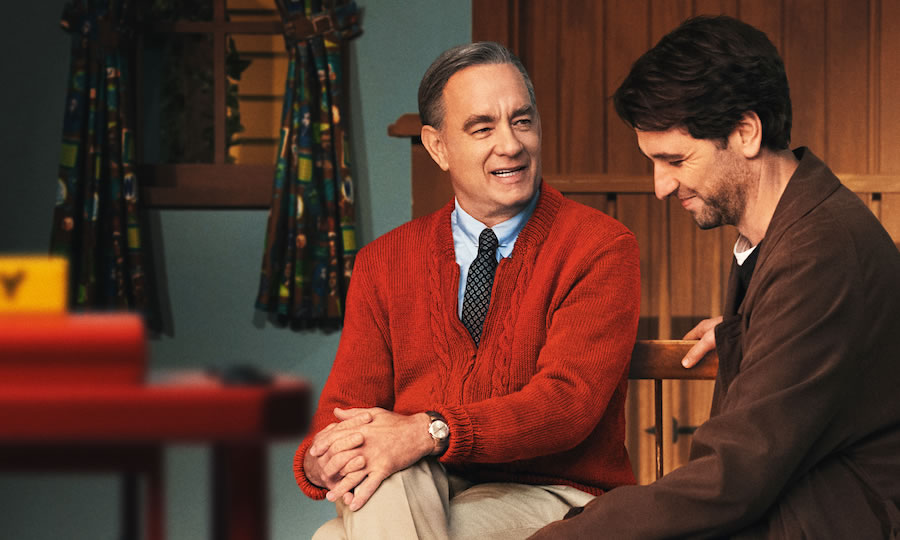 “There are testimonies that have come out of the show,” said Amy Hollingsworth, author of The Simple Faith of Mister Rogers. “Peoples’ lives were transformed.

“Drug addicts and abused children, their lives [were] changed because they watched Mister Rogers’ Neighborhood.”

Hollingsworth spoke briefly at the red carpet premiere of A Beautiful Day in the Neighborhood in Pittsburgh, Pennsylvania, where Rogers worked and lived. A feature-length dramatic film now playing in theaters, it stars Tom Hanks as the children’s TV educator.

Rogers’ wife Joanne, today age 91, first met the filmmakers five years ago. She and Bill Isler, head of The Fred Rogers Company, worked with movie producers for years to get the details right.

“I remember getting the script to look at and saying, ‘This is the one,’” recalled Joanne Rogers in an interview. “There wasn’t any more I wanted to add. I sent it right back without any [notes].”

She added: “[But] I didn’t think it was going to happen.”

It took TriStar Pictures signing on up-and-coming director Marielle Heller to get the project fully in motion.

Heller surprised her own producers when her friendship with superstar Hanks led him to agree to portray the American icon.

“It felt like a bit of a miracle,” said Heller on the red carpet. “We thought he was going to say no again, so when he said yes it was just shocking and wonderful.”

The Renaissance of Rogers

The major motion picture rides a wave of cultural interest in Rogers, whose life and legacy are lauded across all U.S. cultural and religious divides.

Last year’s Rogers documentary Won’t You Be My Neighbor? became the highest grossing biographical doc of all time.

First published in 2005, the book on his faith landed back on the Wall Street Journal bestsellers list last summer. A major 320-page Rogers biography also became a bestseller. And a podcast entitled “Finding Fred,” featuring interviews with those who best knew Rogers, has been climbing the national charts.

Longtime operations director for Rogers, Isler discussed the source of universal appeal his former boss continues to enjoy. “Fred worked at his faith every single day,” said Isler. “From the time he woke up to the time he went to bed, he worked on being present for people.”

In the film, a fictionalized version of journalist Tom Junod is assigned to do a story on Fred Rogers. A cynical, dysfunctional writer, he has his world turned upside-down by the encounter.

Twenty years following the film’s events, Junod reflects on what made Rogers tick.

“[Fred] saw God in the pain, vulnerability, hope, and beauty of people.”

“But for Fred, that is where he saw God: in the pain, vulnerability, hope, and beauty of people.”

Widespread love for Rogers is perhaps matched only by an American actor with 40 years of iconic roles to his name.

“The thing about Tom Hanks is, there are [few] actors who we feel like we know and trust like him,” said Heller. “He is this person who we’ve grown up with. We have that same feeling about Mister Rogers.” Only this week did Hanks and the rest of the world learn that he and Rogers are actually sixth cousins.

Early reviews have noted Hanks’ nuanced portrayal as defining for the actor, compared even to Forrest Gump.

The director insisted their film not give Rogers a halo. Heller sat down with Rogers’ wife early on to understand his layered personality.

“It’s important that you don’t think of him as a saint,” said Joanne Rogers. “Because if you do, then his message is unattainable. It’s something you can’t even aspire to.”

Those words are spoken by her on-screen counterpart, nearly verbatim.

“We show the human side of Fred,” said Heller. “He was a person like the rest of us, walking around with as much pain and confusion as [anyone] — and making choices about how to cope.”

His intentional routine comes to life as viewers see the way he pursued relationship with the hardened journalist. It’s evident when Rogers kneels in the morning, praying out loud the names of dozens of family members and close friends.

And it’s clear in how he produced the show that bears his name.

More Than a Puppet Show

Hollingsworth, like director Heller, came to know Rogers through her kids tuning in to Mister Rogers’ Neighborhood. The educator spoke and sang direct to kids, and told stories with colorful puppets.

“The first thing I noticed is he got my whirlwind of a toddler to sit still for 30 minutes,” said Hollingsworth. “When I started watching, I thought: This is simple, but not simplistic. Fred was a philosopher, psychologist, and confessor all at once.” He studied under her for a decade, while earning a seminary degree at Pittsburgh Theological Seminary. The Presbyterian Church ordained Rogers as a television minister to children, a first for the denomination.

When writing all those seemingly simple songs, Rogers utilized his music composition degree from Rollins College. “Fred took of all his loves into this amalgam of wonder he presented on television,” said Hollingsworth.

Over 40 years, Rogers did more than educate through his shows — he saved lives. He told Hollingsworth of a boy who first wrote to him around 1985.

“At age 7 or 8, he was being horribly abused by his parents,” said Hollingsworth. “He turned on the television one day and saw Mister Rogers’ Neighborhood. What he saw on the show gave him the bravery to call an abuse hotline and tell what was happening.”

“Fred took of all his loves into this amalgam of wonder he presented on television.”

She asked Rogers what about his program inspired that call. “We treated each other with kindness,” said Rogers. “He didn’t know that kind of kindness existed in the world. Once he knew that, he knew that there was a different life for him.”

Though privacy prevented him from providing further details, he told Hollingsworth those parents went to jail. The boy was later adopted by the person who answered his abuse hotline call.

Seeing the Value of Every Person

One scene in A Beautiful Day in the Neighborhood may appear too syrupy sweet to some who saw it in previews. Children riding the New York City subway notice Rogers and start to sing his show’s opening theme song.

Upon recognizing Rogers, dozens of New Yorkers really did join together in song on their commute. “That’s a true story,” said Isler. “It happened more than once, including a time I remember when I was with him.”

Joanne Rogers notes her husband never aspired to become a national hero, and certainly not the subject of a major motion picture. He simply loved to engage people and show what grace looked like.

“He talked about being a human archaeologist,” she said. “It wasn’t fake — he really wanted to know about you and hear your stories.”

Rated PG for some mature themes and brief language, A Beautiful Day in the Neighborhood is currently playing in theaters nationwide.