2021 was a challenging but momentous year for our military as the longest war in American history came to a close. 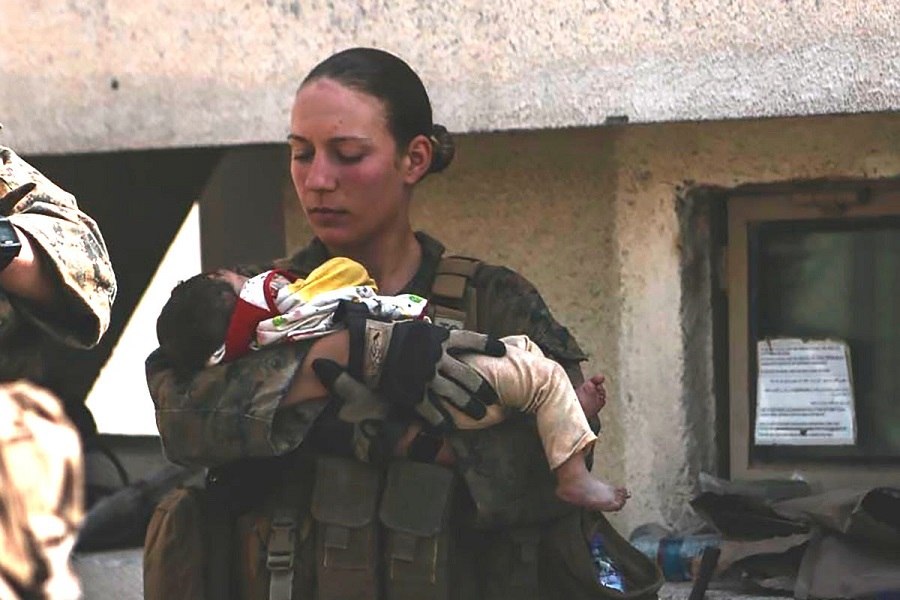 “I love my job,” U.S. Marine Sgt. Nicole Gee posted to Instagram on August 20, 2021, while holding an Afghan baby during the U.S. military withdrawal from Afghanistan.

Six days later, Sgt. Gee and 12 of her fellow U.S. service members were killed in a suicide bombing on Hamid Karzai International Airport in Kabul. All 13 American heroes left behind countless loved ones, friends and fellow Marines and soldiers. More than 20 Americans were also wounded in the horrific terrorist attack.

Less than two weeks before the deadly bombing, I wrote on The Stream that the more than 2,400 American warriors killed in Afghanistan deserved better than the chaotic conclusion to the longest war in American history. Those fallen heroes, their families and the hundreds of thousands of veterans who served in Afghanistan should not have been forced to watch horrifying footage of Afghans falling from military jets or mourn the deaths of more brothers and sisters in arms at the hands of terrorists.

Politicians on both sides of the aisle unquestionably failed our military community throughout the Afghanistan conflict and especially at its bloody conclusion. Yet as we look back at 2021 and the war in Afghanistan as a whole, the many failures by those inside the Beltway have done nothing to diminish the service and sacrifice of our military community since 9/11. In fact, spotlighting the bureaucracy that often gets in the way of our military fighting and winning our nation’s wars has only enhanced the nation’s collective respect for the brave men and women of the U.S. Armed Forces.

While the chaotic Afghanistan withdrawal stands out as the biggest military story of 2021, we should not forget the ongoing risks faced by valiant U.S. troops serving in dangerous places like Syria and Iraq. While the U.S. military combat mission in Iraq formally ended a few weeks ago, the approximately 2,500 service members still stationed there face clear and present danger, especially from Iranian-linked rocket and drone attacks.

Similar risks are faced by the estimated 900 U.S. service members still fighting ISIS and other terrorist groups in Syria. About 200 American troops were targeted in a series of coordinated attacks in October, not to mention that Syria is probably the most dangerous country in the world due to terrorism and civil war. Our troops patrolling violent areas of Syria are truly doing the Lord’s work by confronting pure evil.

Our military community also spent 2021 responding to natural disasters and COVID-19 while simultaneously trying to adapt to complicated coronavirus vaccine requirements and mandates. The increasingly aggressive actions of China toward Taiwan and Russia toward Ukraine have also forced our military to operate in a state of heightened alert. Too many American service members were also lost to training accidents in 2021, including U.S. Navy SEAL Team 8 Cmdr. Brian Bourgeois in December. We mourn their tragic deaths and pray for their grieving families.

Thankfully, there were also heartwarming moments as thousands of courageous Americans returned from deployments to Afghanistan, the Middle East and other perilous places. We were so grateful to God to see these volunteer warriors reunited with their loved ones. One of my favorite things to do here at The Stream is post photos from military homecoming ceremonies.

The bottom line is this: no matter how many obstacles stand in their way or how much their mission is muddled by incompetent bureaucrats in Washington, our military community is always ready and willing to step forward, serve and sacrifice. These remarkable patriots are truly the best America has to offer.

Indeed, as Sgt. Nicole Gee so poignantly posted, the men and women of our nation’s military love their jobs. That’s why we love them and thank all U.S. troops, veterans and military families for their devotion to freedom and our flag. May God keep you safe in 2022 and beyond.