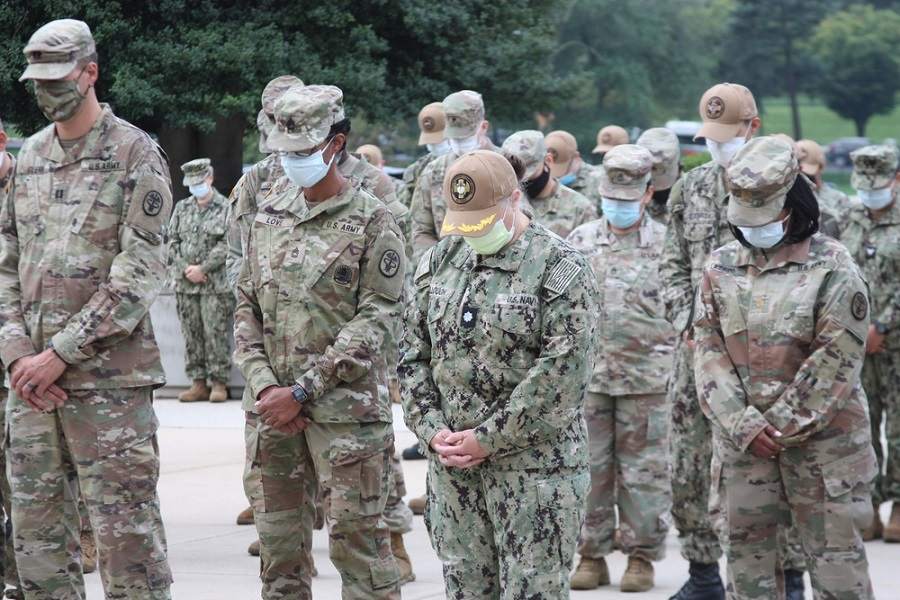 U.S. service members at the Walter Reed National Military Medical Center observe a moment of silence during a 20th anniversary of 9/11 ceremony held on September 9, 2021, in Bethesda, Maryland.

The war in Afghanistan isn’t over for wounded U.S. military service members or the families of those killed in action.

One brave Marine who was wounded in the August 26 terrorist attack on Kabul International Airport is still hospitalized at the Walter Reed National Military Medical Center in Bethesda, Maryland. Stars and Stripes reports that the injured warrior is in “serious but stable condition.”

Fifteen injured Marines were originally hospitalized at Walter Reed following the ISIS suicide bombing that killed 13 members of the U.S. military and wounded more than 20. We are grateful to God and the extraordinary military doctors and nurses who helped improve the conditions of these American heroes.

One of those Marines is Cpl. Kelsee Lainhart from Indiana, who is now recovering from her injuries in Chicago, according to WXIX-TV. The television station’s article includes an address to mail letters of support to the wounded Marine.

May God bless all of these wounded heroes and especially the Marine still recovering at Walter Reed. America is behind you!

“It’s for Michael. This whole thing is for Michael,” Ollis said during his remarks to the crowd. Story by @LiottaPaul for @siadvance.https://t.co/rSJ4vZI1vQ

This week in New York, the new Staten Island Ferry was officially named after a fallen hero of the war in Afghanistan. The ship’s name honors U.S. Army Staff Sgt. Michael Ollis, who made the ultimate sacrifice in 2013 while saving the life of a Polish soldier. Staff Sgt. Ollis, whose story is now the stuff of military legends in both the United States and Poland, posthumously received the Distinguished Service Cross for his selfless valor.

I wrote about Staff Sgt. Ollis for The Stream in 2015 and subsequently had the privilege of meeting his father, Bob, and sister, Kimberly. Words cannot express how pleased I am to see the Ollis family and their beloved Michael receive this richly deserved honor. I can’t wait to board the Staff Sergeant Michael H. Ollis someday soon!

More than 3,000 combined U.S. troops are still fighting ISIS in Iraq and Syria. As I wrote late last month, our nation’s military is still at war, even if the president says they’re not.

This week in Iraq, where elections are set to be held on Sunday, warplanes destroyed ISIS hideouts and killed several terrorists. The U.S.-led coalition said that a similar operation was carried out last week by the Iraqi military.

Our SDF partners are hammering Daesh networks by denying them sanctuary & the means to plan, prepare, & carry out attacks. Recently, the SDF w/the support of @Coalition arrested 2 terrorists in Deir ez-Zor. We remain resolute as partners of the SDF in their fight to #DefeatDaesh. https://t.co/zE0oRwd9eU

In Syria, hundreds of American troops remain on the ground to train, equip and fight alongside anti-ISIS forces. Two terrorists were arrested earlier this week in Deir ez-Zor, according to the above coalition tweet.

Please continue to pray for all valiant U.S. troops risking their lives in Syria, Iraq and other dangerous places around the world, as well as military families here at home.

One potentially dangerous place U.S. troops are deployed is Taiwan, according to The Wall Street Journal.

On Thursday, the newspaper reported that a small number of U.S. special operations forces and Marines have been “secretly” stationed on the island for “at least a year” to train Taiwanese military forces. The White House and Pentagon have grown increasingly concerned by China’s aggressive actions and rhetoric toward Taiwan, which the communist government in Beijing claims is sovereign Chinese land.

Thank you to all the courageous U.S. troops currently serving in Taiwan.

A brave U.S. Marine got the gift of a lifetime upon returning from a six-month deployment on Sunday. He got to meet his daughter for the very first time. 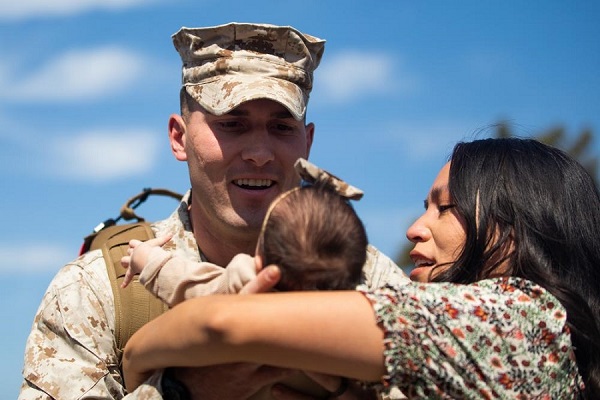 A U.S. Marine meets his daughter during a homecoming event at Camp Pendleton in California on October 3, 2021.