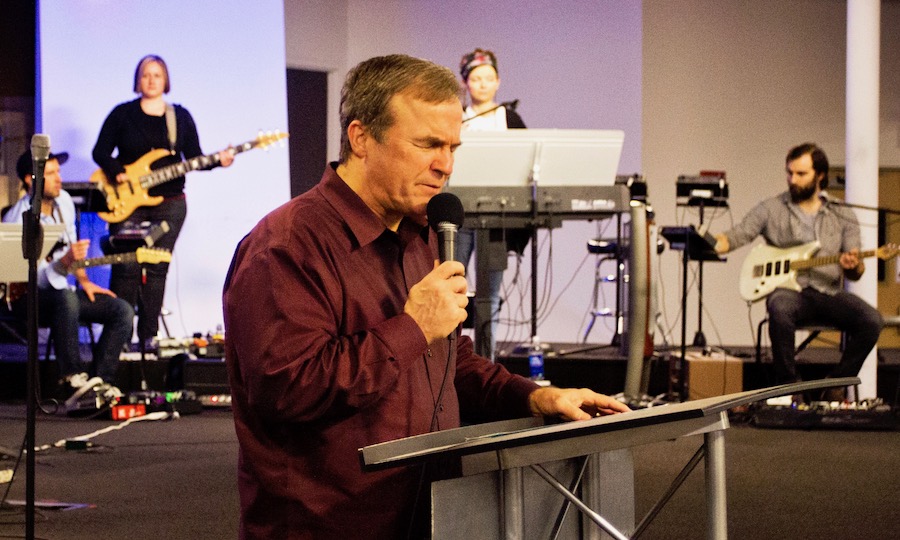 Bible teacher Mike Bickle leads prayer alongside one of several worship teams at the International House of Prayer-Kansas City. This week, the evangelical ministry marks twenty years of continuous night-and-day prayer with worship.

On September 19, 1999, a prayer meeting began at a small facility in Grandview, Missouri, a suburb of Kansas City. The prayer has not stopped since.

Thursday marks twenty years — more precisely, 175,320 hours, including leap days — of continuous prayer with worship at the evangelical International House of Prayer-Kansas City. IHOP-KC is now housed in a much larger location, with multiple prayer rooms and live YouTube feed. Hundreds of full-time staff and musicians serve in shifts to sustain the 24/7 schedule.

“Two decades ago, we said ‘Yes’ to keeping this sanctuary open and gazing on His beauty morning, noon, and night,” said Mike Bickle, founder and director of the nonprofit missions group. “God has shown His zeal for this, and I have no regrets.”

Under Bickle’s leadership, the nondenominational ministry welcomes visitors who come to pray at any time — day or night. Yet IHOP-KC also has its detractors, both in the media and Christian circles.

“Anybody who has an ‘encounter’ that does not honor the written Word of God, I tell them: We have no interest and no time for it.” — Mike Bickle

In 2011, a New York Times article quoted sources describing the group as “controversial, cultish, [and] unorthodox.”

In a phone interview from his office adjoining the main prayer room, Bickle shared about their mission, addressed popular criticisms, and explained their message to the Church. It has been lightly edited for clarity.

Observers are often confused about the identity and purpose of IHOP-KC. How would you describe it? Mike Bickle: As Christian believers, we have committed to prayer both spiritually and practically.

We really believe the prayers going up in our multiple prayer rooms have an impact on the local community — and the world. Practical acts of service also play a part, because we love this community and want to serve it as best as we can.

IHOP-KC really has three different identities, as I’ve told our people from day one. To us that are here, our 600 staff members, we are a parachurch missions organization.

To this city and the nation, we are a prayer room. Most don’t even care about our missions mandate, they only care about the prayer room! To the Lord, He goes: I’m building My Church, and that’s who I am coming back for. So you are an expression of My Church.

It’s a bit strange. I don’t mind saying to people, ‘We’re a church.’ But you do that, the presuppositions are so dramatic and so intense. Then they put demands and expectations on us that are far different than what we are as a missions organization.

There are now hundreds of houses of prayer worldwide. How has IHOP-KC played a role in this movement?

Bickle: Twenty years ago, the Lord impressed on my heart a few things about our mission that remain really clear. One of them is that anybody could come to IHOP and recruit anyone they want. We’ve had 20,000 staff, students, and interns over the years. Literally, 20,000 team members have been here — most of them, two to three years, a number of them eight to ten years.

When they go out and about, I’ve said: ‘Take the name of the ministries you’re joining, not ours.’ Rather than taking our name, they join and start other ministries in the cities they go to. I’ve been adamant about it.

There is one leader who became an exception. My dear friend Billy Humphrey leads a ministry called International House of Prayer-Atlanta. When they launched in 2006, I called him up multiple times and begged him to change it.

I said, ‘Billy, please don’t do that! Call it Atlanta House of Prayer.’ He said, ‘Sorry, it’s already on the building.’ They are the only one out of hundreds of prayer groups.

Some criticize the emphasis on prophecy and hearing from God. How do you ensure worship practices remain anchored in the Bible?

Bickle: Anybody who has an ‘encounter’ that does not honor the written Word of God, I tell them: We have no interest and no time for it. I don’t care how convinced they are it was from the Lord. But there are many kinds of encounters that honor the Word.

Bickle on his 2016 endorsement of Ted Cruz

I had never endorsed a political candidate before. This group of about 30 Christian leaders had known each other for over 25 years, figures like Tony Perkins and Dr. James Dobson. They’ve been the boots on the ground mobilizing Christians to vote.

Prior to the last election, someone pulled me in. They said, ‘We should not do this without having a representative from the prayer movement.’ These leaders were talking to the 17 conservative candidates every other day, whereas I am politically illiterate.

At the outset, it involved a commitment. They said, ‘If you join this group, and if 75 percent of us choose a candidate, all of us have to endorse that candidate.’ Everybody gave their word of honor. We met five or six times. I love those leaders and enjoyed learning from them.

This was a year before the election, when Trump was one of the 17. They said, ‘He doesn’t have a chance! He won’t even be in the conversation in six months.’ Ultimately, the group chose Cruz — which I was happy about. Senator Cruz was the one I liked most, because of his faithfulness to pro-life convictions and family values.

Apparently, someone on his team had been part of IHOP at one point. Word made it up to Cruz or his campaign manager: They’ve got so many young people there! So they put out a statement: ‘We are so grateful for the endorsement of Mike Bickle.’ It seemed to be everywhere.

It’s not something I believe I would do again. Not because of the kickback or reproach — I am willing to take a stand as God calls. But I don’t think it was helpful to the candidate. Then, of course, Trump got the nomination and shocked everyone.

Like the Lord may say to somebody, Move to the other part of town. There’s nothing in the Book of Acts that contradicts moving to the east side of Kansas City. It doesn’t dishonor the Word; so there are subjective things like that.

Why is it that the end times and prophetic passages of Scripture are recurring themes in your sermons?

Bickle: In the American church, by and large, there is far too little teaching on biblical prophecy and the end times. I am bold about that because Paul the apostle was bold about it. Literally, I just taught Wednesday night through Thessalonians. Let’s look at the context.

In Acts 17 verse two, we learn Paul was only there in Thessalonica for three weeks. So Paul had a church plant, which really doubled as a new believers’ class. It was both. Yet he taught surprising things about the end times.

Yet Paul says three times in Thessalonians: ‘Did I not teach you this when I was with you?’ Paul did not want believers to be ignorant of prophecy and the end times, themes he taught on when there for only three weeks.

Now he was writing: ‘You ought to know this by now.’ Two thousand years later, we ought to as well.

When you look at the global prayer movement, what most excites you?

Bickle: How fast it’s growing. But what discourages me is how far we have to go. The prayer movement is millions of people, but it’s still less than perhaps 10 percent of the Body of Christ. While the percentage is still small, the numbers are growing so fast that I’m very encouraged.

I’m passionate about seeing it growing more. I am asking the Holy Spirit to raise up more passionate, Bible-believing people of prayer in the earth — thousands and thousands of them. What we’ve found is, unconnected to us, the Lord is stirring them up sovereignly all over the earth.

Special services commemorating the 20 years of continual prayer at IHOP-KC will be broadcast online Thursday and Friday evening, celebrating what leaders describe as “twenty years of God’s grace.”

Learn more about International House of Prayer-Kansas City, including in the video below. Explore The Stream’s complete religion coverage, and sign up to receive top stories every week.