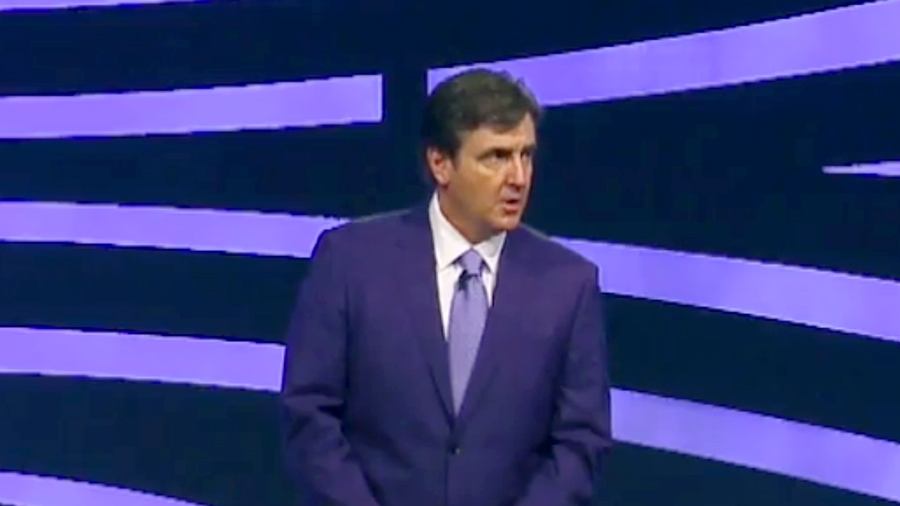 In this screengrab from video, Pastor Allen Jackson speaks at World Outreach Church in Murfreesboro, Tenn., on April 12, 2020.

In a recent interview with “The Pure Flix Podcast,” Jackson, author of the new book Intentional Faith: Aligning Your Life with the Heart of God, recounted his upbringing and how his family found Christ many years ago through his mother’s cancer diagnosis.

As the family departed for testing at the Mayo Clinic one day, his mom made the decision to turn to God. Jackson explained, “She prayed a little prayer — ‘Before I die, let me know the truth’ … so she could tell her sons.”

And what happened next was absolutely incredible: the cancer disappeared and her family learned the truth.

“When they got to Mayo Clinic for the examination,” Jackson said, “the doctors came in and said, ‘We can’t find your cancer. Go home and raise your babies.’”

It was that prayer and an act of reliance that changed everything. And then his mom was washing dishes after her healing and she heard a voice that said, “You asked to know the truth before you died.” The voice continued: “I am the way, the truth and the life.”

Jackson said his mother then went to the Bible and found that verse in John and learned what the gospel truly means. That experience transformed Jackson’s life, though he said he was still distant from church afterward because he found it stuffy and formal.

“I didn’t like ministers,” he recalled. “This was 40 years ago. Pastors wore black robes and they looked like they ate green persimmons. And I liked to laugh … and I thought, ‘I can’t do that,’” he recalled.

But it was in his junior year of college when his ticket to medical school was all but sealed that he felt a small nudge from God. He cautiously listened and took steps toward ministry.

Years later, the results blossomed into the 15,000-member congregation at World Outreach Church in Murfreesboro, Tenn.

“Up until that point in my life, I wanted God to do my will. I didn’t want to be blatantly immoral. I just wanted God to be busy about fulfilling my dreams,” he said. “And so what flipped was I began to very carefully, cautiously, say, ‘God, I’ll do Your will.’ And I didn’t know what that meant. Because it certainly felt like I was forfeiting a lot of control. And it felt like I was stepping into the darkness. But I began a journey.”

Jackson continued, “And what I really learned through that was you can be as intentional following God as I had been intentional in building a medical diagnosis.”

And that has been his goal with his ministry, teachings and writings. His solution is simple and he has led thousands of followers in all stages of their journey with Christ through the process.

His new book, Intentional Faith: Aligning Your Life with the Heart of God, outlines his 100-day plan to live more intentionally for God and reignite your faith no matter where a person is in his or her journey.

“We all know the right thing — but want the simple path,” he said. “I don’t think sitting in church on Sunday makes you a Christ follower. … So what do we do with faith? I’ll give you one of the things we talk about in the book,” he asked. “Read your Bible. Not randomly. Not casually. Systematically, intentionally, let’s read through it this year. Fifteen minutes a day. You can read through your Bible in a year if you read slowly.”