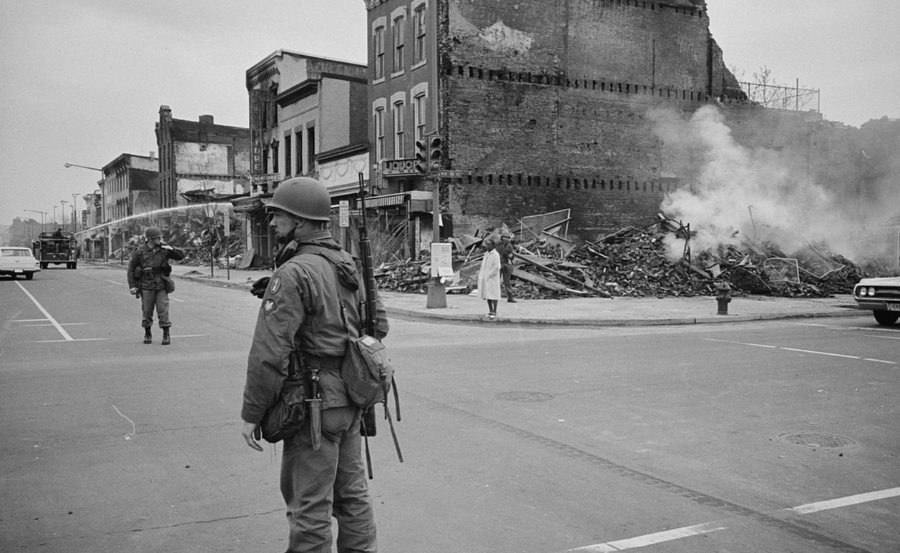 A soldier stands guard on the corner of 7th & N Street NW in Washington D.C., April 8, 1969, near the ruins of buildings destroyed during the riots following the assassination of Martin Luther King, Jr.

Tucked away near the end of the book Ten Blocks From the White House, by reporter Ben Gilbert and the staff of the Washington Post, is a theme that has reverberated through urban riots for more than fifty years. That theme is Marxism.

Ten Blocks from the White House tells the story of the riots that erupted in Washington, D.C. in 1968, after the murder of Martin Luther King. More than 1,200 buildings were burned. The cost was almost $25 million. As with the spring of 2020 riots, the mayhem was caused by Marxist radicals.

Four months after the D.C. riot, in August 1968, Gilbert, a black reporter for the Washington Post, got a lead. He made contact with three men who claimed responsibility for the violence following King’s death. The men were left-wing agitators who had been planning violence for months before King’s death. Then they used King’s death to spread chaos, from setting fires and tossing bricks to dynamiting buildings.

Many of the rioters were looters, criminals and kids. According to at least one witness, they cared little or nothing about Martin Luther King — just as today’s anarchists care nothing about George Floyd.

After the smoke cleared, Gilbert put word on the street that he wanted to speak with the men who had sparked the conflagration. He heard back that the main instigator would meet him at an old D.C. hotel. When Gilbert arrived, three men were there. The men were hidden behind ski masks and announced themselves as Marxist revolutionaries.

One quoted Che Guevara — “In a revolution, you either win or die.” Another called white people “the Beast” and insisted King was killed because he fought “colonization.” Today these men are probably tenured professors at America’s elite universities.

Here were two faces of America — the rage of the radical and the dignity of the nonviolent Christian. Fifty years later they are still facing off.

The leader then explained how they had been planning violent action since February, or two months before King was killed. “A lot of areas we went into,” said one, “there was nothing going on till we got there. But once we started our thing, man, people just took up.” 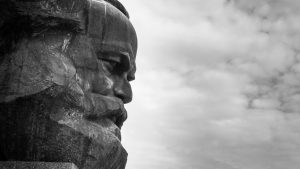 Using Molotov cocktails and dynamite stolen from construction sites, the men bombed stores, most of them white-owned businesses in the black neighborhood now known as Shaw. One of the men claimed responsibility for at least fifteen of the fires that destroyed parts of the city.

He further explained that he had more than twenty-five men working with him. “There is organization. Don’t you realize that, as I said, there’s a revolution going on; there must be organization! That’s the reason that it was not a riot but a rebellion! There is organization. You have your assigned districts that you work with.”

We hear an identical echo in 2020. More and more reporting reveals that Marxist groups like Antifa used bricks, rocks, fireworks and a network of scouts and cars to bring mayhem to New York and other cities in the wake of the killing of George Floyd. 2020’s Marxists are more pathetic kids than full-blown radicals. Their violent forefathers are men like Stokley Carmichael. Carmichael, a communist, took over the Student Nonviolent Coordinating Committee (SNCC) in 1966. He was a main agitator in the 1968 D.C. riots. Carmichael had, according to historian Fred Siegel, an “ideological infatuation with violence.”

Carmichael and other totalitarian visionaries wanted to wed the violent action of the street radicals to the civil rights movement. As described by historian Benjamin Muse, Carmichael’s rhetoric “resembled at times the anti-white fulminations of Malcolm X, at times a harangue of Spartacus to the Roman gladiators, at times the senseless bawling of an angry child.” In 1968 Carmichael was stationed in Washington, D.C., after spending time in Hanoi, Havana, and Moscow.

It’s interesting to compare the reporting of the 1968 riots with now. “The crowds … generally were made up of bands of youth,” the Post reported in 1968. “Some were schoolchildren, younger than ten years old; some were teenagers and twenty-year-olds — many dropouts or unemployed.” A young black man at the scene put it more bluntly to the Post: “[T]he death of Martin Luther King had nothing to do [with this]. It was an excuse to be destructive or clean up.” Today the Post, infected with the soft Marxism of identity politics, would never report so accurately.

America’s 2020 riots are a pee-wee-league retread of 1968’s leftist demolition. In fact, the main fuel of resentment fueling the rage goes back much farther than 1968. Civil rights historian Benjamin Muse noted as much. He addressed the radical element that took over the Civil Rights movement in the mid-1960s:

In many respects, including its confinement to a racial minority, comparison of [the radical takeover of the civil rights movement] with the French Revolution would of course be overdrawn. Yet certain analogies with that convulsion may be apt. The American Negro Revolution, preached for years by Negro intellectuals and set in motion in the early 1960s by elements of the bourgeoisie, witnessed in 1966 a rising, turbulent and misguided, of the sans-culottes.

“We Have Gone Full Swing Into Revolution” Versus “We Shall Overcome”

The morning after Martin King was murdered, Stokely Carmichael held a news conference. There he announced, “America killed Dr. Martin Luther King, Jr. last night … . What it means is that we have gone full swing into the revolution.”

After his conference Carmichael went to a rally at Howard University, one of the oldest and most prestigious black schools in America. Howard stands proudly on a hilltop over black Washington, which at the time was burning. One reporter observed that “the tenor of the speeches was vehemently anti-white.” The American flag was lowered and the flag of Ujamma, a black separatist group, was raised.

After Carmichael spoke, something remarkable happened. The doors of Howard’s Crampton auditorium opened. A throng of immaculately dressed black men and women poured forth. They had been at a memorial service for Dr. King. The faithful had sung Brahms’s “Requiem,” the hymn “Precious Lord,” and “A Mighty Fortress is Our God.” The service ended with “We Shall Overcome.” As the mourners filed out, they came face to face with Carmichael. Here were two faces of America — the rage of the radical and the dignity of the nonviolent Christian. Fifty years later they are still facing off.