Ryan Anderson keeps cool in the debate over marriage while others are losing theirs.

ERIC METAXAS (Breakpoint Radio) — Chuck Colson always said we Christians must make our arguments winsomely. What happens if we get shouted down — again and again? We keep going. Winsomely.

In the past few years, a growing number of young voices have emerged to lead a thoughtful public discussion on marriage and religious liberty. One of the strongest of these new voices surely belongs to Ryan Anderson, a senior research fellow at The Heritage Foundation.

Just 33 years old, Anderson has coauthored a book on the meaning of marriage with his former professor and my dear friend Robby George. Perhaps more noteworthy than his forceful writing, however, is Anderson’s willingness to discuss marriage on hostile media outlets where he meets the jeering of angry hosts with grace, respect and clear reasoning.

Now, we could devote any number of BreakPoint commentaries to Anderson’s work, but one recent situation explains better than most just how difficult it is to have civil discourse about challenging issues these days — and how we must remain civil in the midst of incivility.

It started with a Washington Post article about Anderson’s tireless defense of marriage. As Post articles go, it’s not bad. It even included praise from a number of Anderson’s debating opponents. 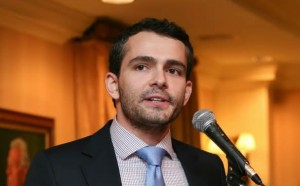 The Post’s lengthy treatment of Anderson came to the attention of Matt Micciche, the headmaster of the Quaker Friends School in Baltimore, which Anderson attended for 12 years. Thinking the school community would appreciate news about a distinguished alumnus, Micciche linked to the article on the school’s Facebook page.

We don’t know the full extent of the outcry, but shortly after posting the link, Micciche took it down. In his subsequent apology, he cited the school’s philosophy: “At Friends, we work together to build and sustain a community that is inclusive, respectful, and supportive of all people; we value diversity and cherish differences.”

The Friends School philosophy sounds like something most of us could get behind. As Christians, we share a deeply-held conviction that all human beings are loved by God and are full members of humanity, making them worthy of dignity and respect.

It seems however, that the Friends School values tolerance, diversity and inclusiveness only up to a certain point.

Responding to the uproar, Anderson wrote, “What message does taking down the post send to conservative students and alumni?” he wrote. “Are they full members of the community to be valued and cherished and respected?”

Anderson wrote that believing marriage to be “a male-female union” was “stigmatized by the head of school as essentially bigotry — to the point of actually censoring expression of the viewpoint.”

He then asks, “How can faithful Catholics, Evangelicals, Jews, Mormons, and Muslims feel welcome and respected, or be treated by their fellow students as worthy of being at the school? The head of school has smeared these students and their parents, tarring them with the brush of bigotry — all in the name of inclusion and concern for people’s feelings.”

Honestly, I thank the Lord for the grace, intelligence and courage of Ryan Anderson. Jesus promised us that we would catch heat for our faith and our convictions. What matters is how we respond. In the face of hostility, Ryan Follows Paul’s injunction in Colossians: “Let your speech always be gracious, seasoned with salt, so that you may know how you ought to answer every one.”

We should do the same. Especially now.  And let’s do Ryan a favor and join our voices to his in defense of marriage.

A Royal Wedding and the Power of Love