As 2020 marks one hundred years since U.S. women gained the right to vote, March for Life leaders state that the pro-life cause resonates with same spirit of liberty and empowerment. 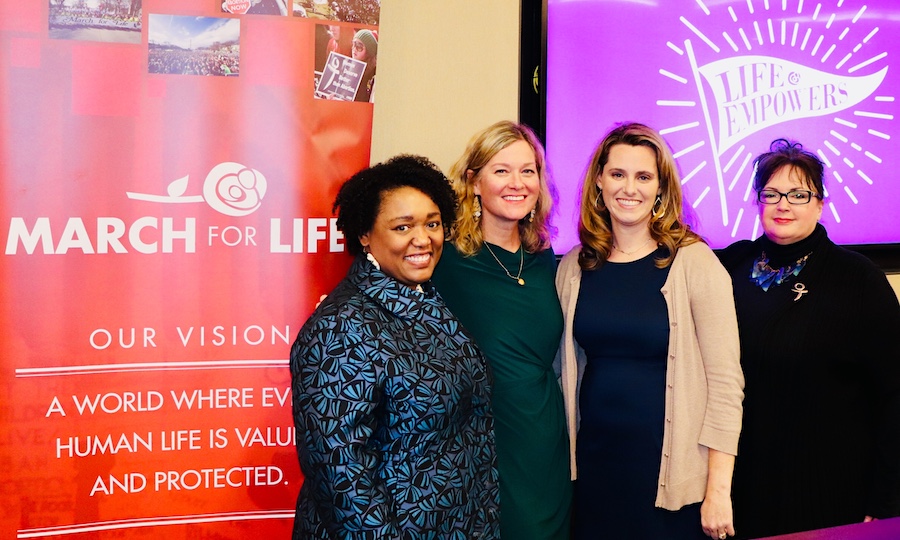 On Tuesday, pro-life leaders unveiled the theme of March for Life 2020 during a briefing held at Rayburn House Office Building in Washington, D.C. They included (L-R) talk show host Gloria Purvis, March for Life president Jeanne Mancini, Victoria Robinson of The Family Foundation of Virginia, and Serrin Foster of Feminists for Life of America.

It’s a message that flies in the face of popular media narratives and rhetoric on debate stages. On Tuesday, four female pro-life leaders unveiled “Life Empowers” as the theme for the 47th annual March for Life. It will take place on January 24, 2020.

Jeanne Mancini, president of the March for Life Education and Defense Fund, noted the theme intentionally invokes the 100th anniversary of a women’s right to vote.

“All of the early suffragists were pro-life,” said Mancini in an interview. “We want to educate about that this year in a particular way and show how being pro-life is being pro-woman.”

The 19th Amendment to the U.S. Constitution, which granted women’s suffrage, was ratified on August 18, 1920.

“Early suffragettes worked along with abolitionists, who were active in the women’s rights movement,” said Purvis. “These African American women didn’t say: ‘Let us get the vote ahead of black men.’ They collaborated with men.

“It’s so different from the current feminist movement, which seems to want to put a wedge between men and women.”

In 1973, the U.S. Supreme Court issued its Roe v. Wade and Doe v. Bolton decisions which struck down all existing state restrictions on abortion. Every year since then, pro-life advocates have joined together for a somber yet joyful observance that draws attention to a grave injustice. “We can’t not march,” said Mancini. “Abortion is the human rights abuse of today. In some ways, we’ve become sensitized to abortion in our culture. But we’re losing lives — to the tune of 800 thousand every year.”

Last year, an estimated 250,000 people braved winter temperatures in Washington, D.C. to participate in the March for Life. Vice President Mike Pence and his wife Karen addressed the gathering in-person, and President Donald Trump spoke in a prerecorded video greeting.

The public demonstration has grown in ideological diversity, as was reflected at the Capitol Hill event. Serrin Foster has led Feminists for Life of America since 1994, a group she describes as “nonsectarian and nonpartisan.”

“We have people of all faiths or none who are part of Feminists for Life,” said Foster. “We welcome all. Curiously, after joining with us in the cause of life, many people have found faith again. It’s not because we’ve said anything, it’s just a pattern that I’ve noticed.”

Foster spoke at length regarding pro-life figures in feminist “herstory,” which her group chronicles. They include Elizabeth Cady Stanton, Dr. Alice Stockham, and Fannie Lou Hamer.

“There is no known suffragist who was pro-abortion,” said Foster.

Movement of Sacrifice and Substance Purvis, a graduate of Cornell University and Catholic thought leader, responded to criticisms of the pro-life movement. Specifically, do pro-life advocates still care about lives after birth?

“I fully reject such a lazy slander of the pro-life movement,” she said. “When you look at who is really caring for the poor and infants, it’s these very pro-life organizations.”

She asserted that groups such as pregnancy care centers and Catholic hospitals are “on the front lines” of local charity and outreach efforts.

“Once you have a child, we’re going to help you with your material needs,” she said. “We’ll help you with finding housing, education, and getting counseling you may need because you’re struggling.”

As election season heats up, Mancini noted that life issues are not merely campaign rhetoric. She recalled working in the Department of Health and Human Services under President George W. Bush. She worked there into the first year of the Obama administration.

“I watched everything positive be undone in the course of a year,” said Mancini. “My experience taught me that every vote matters. Every political appointee will be working to craft policy, change language, and provide grants that impact life.”

She echoed a maxim often credited to President Ronald Reagan: personnel is policy. “Decisions are made at every level of the federal government about life issues,” she said. “People who think this is not a substantive cause are wrong.”

March for Life will occur only two weeks before the Iowa caucuses in early February. March organizers recognize that party politics will inevitably be a backdrop to their gathering.

“Planned Parenthood is a political advocacy group with a focus on expanding abortion,” said Mancini. “It is unfair to force Americans to subsidize through their tax dollars this partisan political organization bent on electing pro-abortion politicians.”

From her standpoint often advocating for communities of color, talk show host Purvis said she finds pro-choice rhetoric demeaning. “If you look at their position, you have to question it,” she said. “So your answer to poverty is to kill? The pro-life movement empowers us to reach across to those are struggling and to help them.”

Further announcements are expected soon regarding the March for Life conference, which will occur the day before the march, and main-stage speakers at the January rally.

“We march to end abortion and to make abortion unthinkable,” said Mancini. “And we march because there are lives at stake here: women’s lives and babies’ lives.”