The Coptic Christian, who focuses on education for Egypt's trash collectors, has drawn comparisons to Mother Theresa. 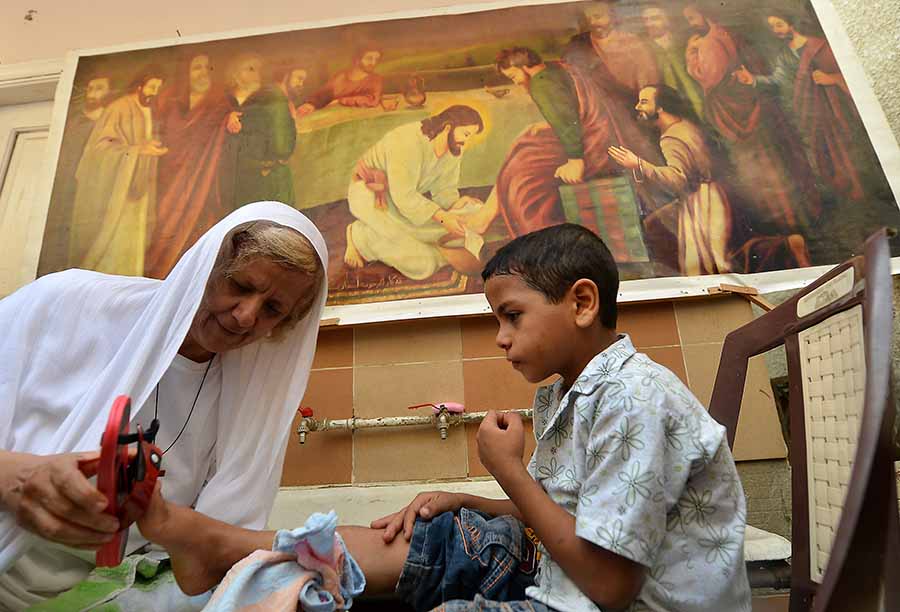 Egyptian Coptic Maggie Gobran, known as "Mama Maggie," offers a pair of slippers to a student during a visit to a school in the impoverished Al-Zabbalin area in Al-Mukatam neighborhood of Cairo.

CAIRO (AP) — In a slum inhabited by Cairo’s legions of informal garbage collectors, children in tattered sandals walk down muddy, trash-strewn alleys to get to Mama Maggie’s community center, where their feet are washed, their wounds are dressed and they are encouraged to learn and play.

On a recent day “Mama” Maggie Gobran herself, dressed all in white, washed the face and feet of a young girl who had lost her right arm in a machinery accident before giving her a fresh pair of sandals and sending her off to play with the others. “I want each child to know how much I love them. I appreciate them, I respect them,” she said.

Her organization, called Stephen’s Children after Christianity’s first martyr, has started nearly 90 such centers, and she estimates they have helped more than 30,000 low-income Egyptian families. They focus on Coptic Christians, a minority that has long complained of discrimination, though Gobran says they help Muslim children as well.

These days there are more people in need of her services than ever before. The 2011 uprising that toppled longtime autocrat Hosni Mubarak led to years of unrest that have taken a heavy toll on the economy. The informal areas she targets, where impoverished residents string up their own power lines and rig their own water taps, are steadily expanding.

Gobran, a 65-year-old Copt, has worked in such areas for more than three decades and has been compared to Mother Theresa, but she comes from an upper middle-class background. She previously worked as a marketing executive and as a computer science professor at the elite American University in Cairo.

“At the American University, they were very good, but they had other people to go to serve them. But these people, they don’t have any,” she said.

The Manshiyet Nasr slum is home to the city’s trash collectors, who run a vast grass-roots recycling program there. Children in threadbare clothes wander the muddy streets while their parents sift through giant mounds of garbage, much of it hauled by donkey cart from across the city of 18 million.

A different world beckons from inside the community center. In the courtyard, a teacher and a group of giggling kids play with a parachute. Another group draws pictures. Upstairs, a doctor examines a sore on a little girl’s foot, and teenage boys who dropped out of school learn to make leather shoes.

Stephen’s Children has long provided early childhood education programs, which Gobran says are crucial to breaking the generational cycle of poverty, but after the age of seven the children had to rely on the state.

In Egypt’s decrepit public schools, poorly paid teachers often rely on private tutoring and families must pay out of pocket for one-on-one attention. An estimated $2.4 billion is spent every year on private tuition in Egypt, according to the U.N., with the extra expense widely seen as essential for passing exams.

This year, the World Economic Forum ranked Egypt 141 out of 144 countries for quality of education. Despite major advances in recent decades, nearly 30 percent of Egyptian adults are illiterate, according to the U.N.

“Parents would come back and say, now the children have good basics, but we don’t have a good school for them,” said Maha Victor, a coordinator for Stephen’s Children.

In response, the organization opened its first school for older children in 2012 in Khosoos, a poor town north of Cairo.

“Mama Maggie thought of the Farah School because of the problems of education in Egypt. And she chose this neighborhood specifically because it’s one of the most densely populated areas and one of the oldest slums,” said Ines Fawzy Malak, who runs the school.

With its small classes, clean facilities and emphasis on creativity, the Farah School stands in stark contrast to the crowded, unruly classrooms in public schools across the country.

Kindergarteners practice writing English and Arabic letters in a brightly painted classroom. At the morning assembly a student receives a prize for a poem she wrote about Egyptian Christians who were kidnapped and beheaded by Islamic State militants in neighboring Libya. Another is applauded for her athletic achievement.

“This school is a lighthouse for the Khosoos neighborhood. A lot of teachers want to join and be part of the crew. We have a big waiting list for the children,” said Malak.

Gobran hopes to duplicate its success elsewhere. “We have plans even after my lifetime. They will continue every year — a number of schools, a number of centers, a number of people.”

She says “it’s never enough,” given the scale of poverty in Egypt. But “whatever it takes, we try to give them support. And then we learn from them.”