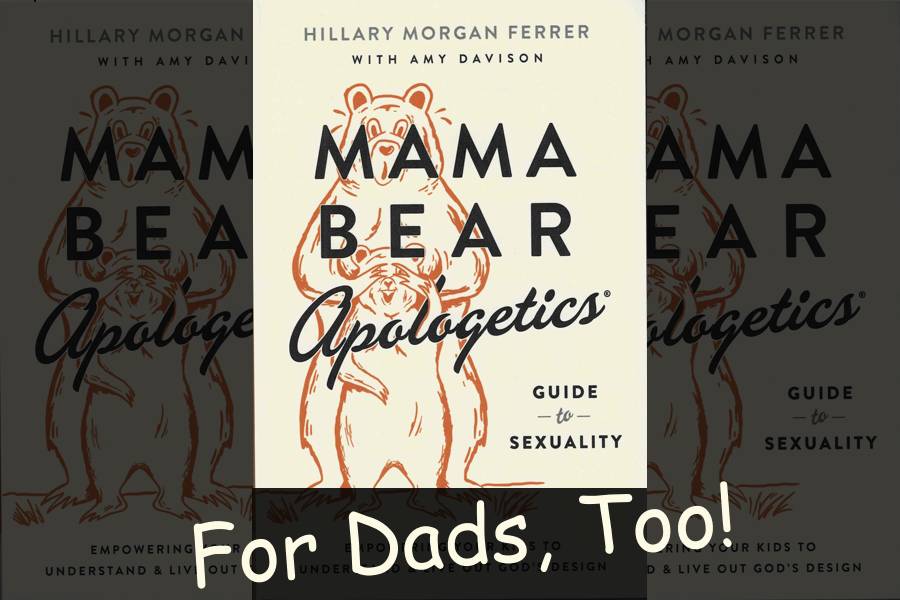 It says it’s for “Mama Bears” — moms who want to see their kids grow up both safe and strong — but the lead author, a friend of mine, asked me to take a look at it anyway. I’m glad she did. Her book Mama Bear Apologetics Guide to Sexuality: Empowering Your Kids to Understand and Live Out God’s Design is just as much for dads as it is for moms. Or almost as much, anyway; all but maybe a few hundred mom-directed words out of around 250 pages.

We live in a sex-saturated, sex-confused world. Maybe once there was a time when parents could let their churches teach their kids about sex and sexuality. I don’t think so, but I’ve said “maybe” just to make the point: If ever there was such a time, it’s long since gone. If kids don’t learn it right at home, they won’t learn it right anywhere.

Maybe, too, there was a time when a solid, healthy parental example was good enough. That’s a more believable “maybe” than the last one. If so, though, those days are long gone, too. A good example still matters, probably more than ever before, but kids get so much false teaching on sex these days, they need strong, definite truth-teaching to correct it all.

Your Kids (or Grandkids), Not Someone Else’s

I’m not talking about just any kids, now; I’m talking about yours. I hate pointing fingers like that, but mine are grown. Besides, I’m talking about my wife’s and my own role in teaching our grandson, or at least helping his parents do their job with him. (I’ve bought them a copy of this book, for one thing.)

Lead author Hillary Morgan Ferrer holds an M.S. in biology and an intense desire to provide “accessible resources for busy moms” on matters relating to the truth and goodness of Christianity. Her co-author, Amy Davison, is an Air Force veteran with an MA in Christian apologetics. (Julie Loos contributed several prayers for parents to pray.)

The Challenge You Never Dreamed You’d Be Facing

I remember my own kids’ biggest sex-related challenge through their grade school years. It came straight from the Bible, actually. “What does ‘adultery’ mean, daddy?” I said, “It would be like me treating another woman as if she were my wife.” That was it. They were satisfied.

Ferrer and Davison know it’s no longer that simple. Part Two of their book is titled, “Wait, My Kids Are Being Taught What?!” I quote from the opening to that section:

According to the National Sex Education Standards (NSES), by the end of fifth grade, your children should be able to explain the following:

Ready for that, parents? I’ll guarantee you this: Your kids aren’t. These are fifth-grade standards! They come from SIECUS, the Sexuality Information and Education Council of the United States, founded in 1964 by Mary Calderone, previously Planned Parenthood’s medical director, and originally funded by Playboy publisher Hugh Hefner. So they don’t come out of any official educational body. Sigh of relief time, right? Wrong. Ferrer tells us these very standards “have been adopted by more than 40 percent of school districts in the United States.”

You knew it was bad out there. Did you know it was that bad, for kids that young? Did you realize how early you need to start getting ahead of the rest of the world on this?

It isn’t just in the secular schools, either. It’s on social media. It’s on TV and Netflix. It’s in their music. And if you protect them from all that, it’s on billboards you drive by on the highway. Sometimes I think it’s in the air we breathe, or at least it seems that hard to keep clear of it.

You can limit their exposure, but you can’t cut it off completely. You’ll have to build their defenses to guard them from it instead.

Yes, You Need This

Any parent who’s not crying out, “I need help with this!” probably isn’t seeing the situation clearly enough. The world’s sex-and-sexuality juggernaut is powerful. Of course you need help; how could any parent not need good guidance on these things anymore? And you won’t find any better than this book.

What’s in it, other than what I’ve quoted above? Help. Guidance. Specific guidance on God’s true view of sex and marriage. Specific info on today’s challenges, including gender, homosexuality, the “morality of consent,” pornography, and even the good and bad of Christian “Purity Culture” days. That, plus practical, age-appropriate, parent-friendly ways you can start the discussions and have the conversations with your kids.

More than that I need not say, except I’m sure you recognize the issues. I know you’ll find the book very, very helpful with them. And I’m just as sure that if you realize how important it is, whether your kids are in the cradle or heading off to college, you’ll make the investment to buy the book and read it.

Christians in a Cancel Culture: Speaking With Truth and Grace in a Hostile World