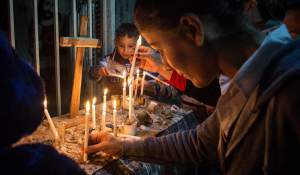 Sister Diana wants to tell Americans about ISIS persecution of Christians in Iraq, but the State Department won’t let her in. Why is the United States barring a persecuted Iraqi Catholic nun — an internationally respected and leading representative of the Nineveh Christians who have been killed and deported by ISIS — from coming to Washington to testify about this catastrophe? Earlier this week, we learned that every member of an Iraqi delegation of minority groups, including representatives of the Yazidi and Turkmen Shia religious communities, has been granted visas to come for official meetings in Washington — save one. The single delegate whose visitor visa was denied happens to be the group’s only Christian from Iraq. Sister Diana Momeka of the Dominican Sisters of Saint Catherine of Siena was informed on Tuesday by the U.S. consulate in Erbil that her non-immigrant-visa application has been rejected.