But we should still stick to peaceful means for dealing with him. 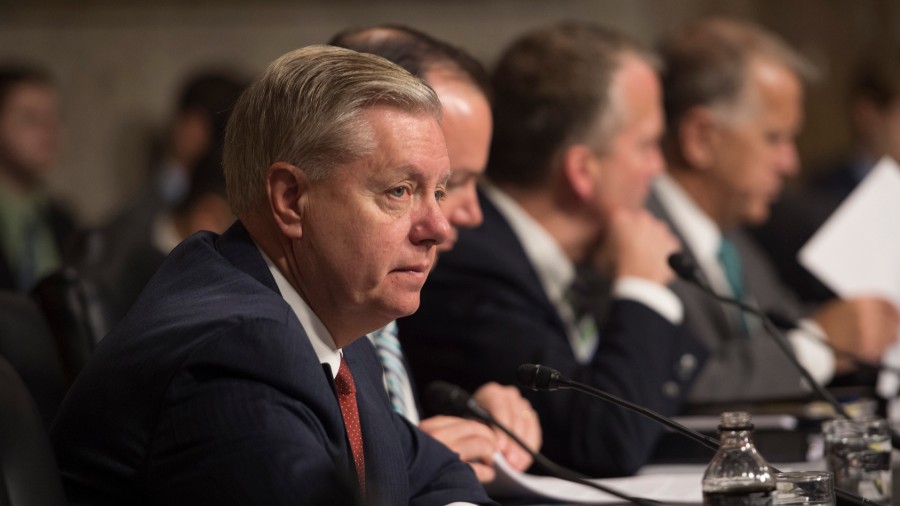 Yes, I know you’re angry. And you have every right to be. The West’s conflict with Russia could easily escalate to a shooting war, then a nuclear war. Hundreds of millions of lives — including mine and your children’s — really are at stake. We’re at an August 1914 moment, when the world stands on the brink.

And the Chairman of the Senate Judiciary Committee, Senator Lindsey Graham has called on Russia’s military to murder their head of state. He compared Putin to Hitler (so original, and yet so temperate and nuanced Lindsey is!) and called for a new von Stauffenberg to shoot or blow up the President of Russia.

Is there a Brutus in Russia? Is there a more successful Colonel Stauffenberg in the Russian military?

The only way this ends is for somebody in Russia to take this guy out.

You would be doing your country – and the world – a great service.

We don’t usually expect the chairmen of Senate committees to spout off like Iranian terrorists. But then, Lindsey Graham has taught us to set our expectations low. This isn’t the first time, by any means, that Graham has flippantly risked a nuclear war with Russia.

Back in 2016, when he was running, absurdly, for president, the South Carolina senator was one of the mad gamblers calling for the U.S. to shoot down Russian planes. Not over Ukraine, to guarantee the country’s theoretical right to apply to NATO (and get vetoed by France or Germany). That’s his pretext for conflict today.

We Must Fight for al Qaeda

No, the vital U.S. interest that demanded a nuclear confrontation with Russia six years ago was different. Russia was helping Syria’s secular dictator Assad fight jihadists linked to al Qaeda. The jihadists had come close to conquering the country, and imposing either sharia or ethnic cleansing on a million Syrian Christians. (You know, the way Sunni extremists purged Iraqi Christians after the last neoconservative war supported by ignorant or callous American Christians like Lindsey Graham.)

Some hothead in Russia might take Graham seriously and murder Putin — which would put the U.S. in the position of Serbia in 1914, after its politicians encouraged some fool to murder Archduke Franz Ferdinand. Next came the trenches, and the poison gas, and 20 million dead.

And the neocon party line in 2016 was that these weren’t jihadists at all, but “moderate rebels.” Trigger-happy Sen. John McCain flew over to Syria personally, met with the jihadis, then came back and vouched for them. And Putin’s air force was frustrating their plans to take Damascus.

So Graham led the chorus that called for an American “No Fly Zone” over Syria. In other words, for the U.S. Air Force to shoot down Russian planes. As Sen. Rand Paul blurted out during a GOP primary debate, that was a “recipe for World War III!”

So is calling for the military to shoot the president of the country. Remember how we reacted when Kathy Griffin displayed the fake severed head of Donald Trump? This is worse than that, because Graham is dead serious. And a U.S. senator, not a D-List comedienne. Some hothead in Russia might take him seriously — which would put the U.S. in the position of Serbia in 1914, after its politicians encouraged some fool to murder Archduke Franz Ferdinand. Next came the trenches, and the poison gas, and 20 million dead.

Graham has long been trigger happy. He infamously told Capitol Police to fire on the peaceful demonstrators of January 6. Had they listened, there might be dozens or even hundreds more like Ashli Babbitt. What did Graham care about an election stolen from Donald Trump, whom he boasted he didn’t even vote for in 2016?

One ought to pay a price for Graham’s brand of crazy talk, which endangers countless millions of innocent civilians, just to briefly raise some obese, effete politician’s sputtering testosterone count. Or to impress his campaign donors in billion-dollar military contracting companies.

But it shouldn’t be the ultimate price. Nobody should try to hoist reckless warmonger Lindsey Graham on his own petard, and give him the rough justice he wished on Vladimir Putin. And I’d like to offer some good reasons why not.

Our Lord said “Blessed are the peacemakers,” but that those who “live by the sword die by the sword.” Lindsey Graham ought to learn this lesson, but let’s leave it to God to teach it to him.

Graham deserves the same chance Saul had to repent, this side of the grave.