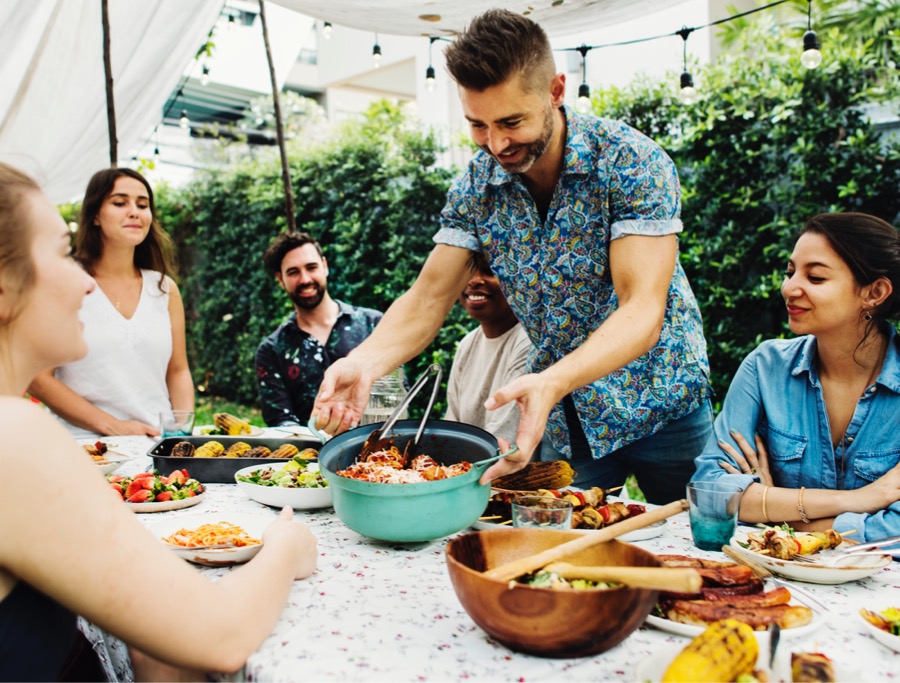 “Lewis and Linguini” is the brainchild of my friend, Joe Loconte. Joe was a professor at King’s College in the Empire State Building and is now back at the Heritage Foundation serving as Director of The B. Kenneth Simon Center for American Studies.

For the past twenty years, Joe has invited college and graduate students to his home for a pasta dinner, good Italian wine, and conversation centering on a selection by Christian scholar C. S. Lewis.

When I moved from Washington, DC to Lander, Wyoming, I asked Joe if he minded if I copy “Lewis and Linguini” — name, format, and topic. Go right ahead, he told me.

A Discussion on ‘Modern Man and His Categories of Thought’

Last week we hosted the inaugural Wyoming “Lewis and Linguini” dinner. While, in a break from tradition, we served burgers rather than pasta, ten Wyoming Catholic College undergraduates joined in a lively, insightful conversation about Lewis’ essay “Modern Man and His Categories of Thought.”

In that essay, Lewis reflected on evangelism or, more accurately, the obstacles to evangelism he saw at the time: 1946.

When the apostles went off to be Christ’s witnesses, Lewis noted, they could count on categories of thought that were hospitable to the Gospel. People at the time — and for centuries afterwards — “believed in the supernatural,” “were conscious of sin and feared divine judgment,” and “believed that the world had once been better than it was.”

That is to say most people believed in god or gods, that we could offend god, that god judged the earth and everyone on it, and that we had been devolving from some golden era complete with “heroes, ancestors, and ancient lawgivers” whose greatness we cannot match.

“The world which we must try to convert,” he wrote, “shares none of these predispositions.” In fact, we have just the opposite.

No Predisposition Toward Christianity

Our reading and education discount the past, focusing on whatever is newest and most likely to affirm what we already believe. “The effect of removing this education has been to isolate the mind in its own age; to give it, in relation to time, that disease which, in relation to space, we call Provincialism.”

Since our conversations and friendships rarely to never approach metaphysical ideas about God and life, “We are being further isolated; forced down to the immediate and quotidian.” Even in our churches, people “are simply not interested in the question of truth of falsehood. They only want to know if it will be comforting, or ‘inspiring’, or socially useful.”

Contrary to the doctrine of the Fall, we believe that the Golden Age is ahead of us. We assume that progress and human evolution are inevitable.

As to God, Lewis wrote, “when the existence of God is discussed, they by no means think of Him as their judge. On the contrary, they are His judges. … They think, from the very outset, of God’s duties to them, not their duties to Him.” And thus Lewis anticipated sociologist Christian Smith’s research showing that the great American religion is what he called, “moralistic, therapeutic deism.” Don’t be evil. God is there to help you though who God is remains rather sketchy.

Finally Lewis noted the skepticism about reason that marks so much of higher education and the higher educated today. We live with “a general, and quite unalarmed, belief that reasoning proves nothing and that all thought is conditioned by irrational processes.” Written in 1946, that could have been written yesterday.

The essay, needless to say, struck a chord with our gathering of Wyoming Catholic College students. After all, they study Homer, Plato, Aristotle, Dante, et al. in order to gain the wisdom of the past and avoid the Provincialism of time. “The faith once delivered” (Jude 3) is not only part of their curriculum, it’s at the heart of the college, reinforced in chapel and in theology classes. We value and celebrate dogma as liberating and life-affirming. And reason, they are taught, is the vital link between the human person and reality, including the reality of God Who revels Himself as the divine Logos (John 1:1).

Given the vast differences in categories of thought, is evangelization hopeless? Lewis didn’t think so and our students agree with him. Intellectual arguments can still point out the flaws in the deeply flawed categories of modern thought. After that “the foolishness of preaching” (1 Corinthians 1:21) can supply an emotional appeal that breaks open the heart.

Our students were, however, sobered by the essay. In the providence of God, this is their era and soil is about as rocky as it has ever been. They — and we — need to meet the challenge God has set before us.

How shall we then live? Lewis and Linguini will continue to augment their education here in Lander as we seek the wisdom of the past to guide us in the future.

And why not try some “Lewis and Linguini” at your house?