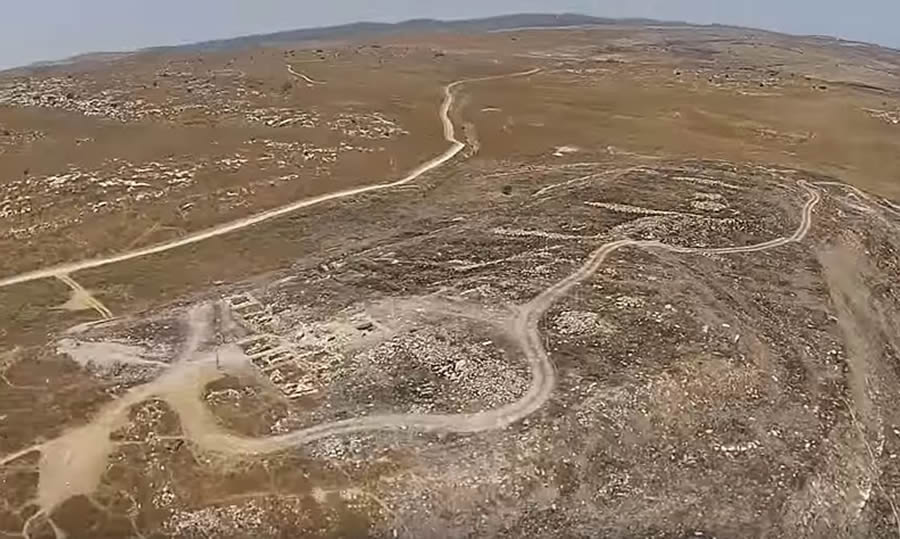 Remains of a large biblical city located in the Judean low hills region east of Hebron, identified as city of Eglon.

A team of archaeologists has found a large building, which they believe is located in the biblical King David’s kingdom. The dig is located at Tel ‘Eton near the Hebron hills, some 30 miles from Jerusalem. Some archaeologists believe King David was a mythical figure. This find may help end that debate.

Professor Avraham Faust of Bar-Ilan University led the dig. Faust told Breaking Israel News that 25 years ago nobody doubted that King David was a real historical figure. “In the last 25 years or so, however, David’s historicity, and especially the size of his kingdom, are hotly debated.” Faust believes the find suggests a much larger highland kingdom than scholars originally thought.

Archaeologists identified the biblical city of Eglon at the site. Eglon was one of the five Amorite kingdoms who fought the Israelites. (Joshua 15:20-29) Later, Eglon was listed as a Judite.

The building was carbon dated to the 10th century B.C. This was the time period of King David’s reign.

The archaeologists didn’t find artifacts that specifically pointed to King David. However, they did find evidence of a “social transformation” in the region. This included the large building called “the four-room house.” It is rare to find these anywhere but Israel, Faust explained.

Faust says despite there being the lack of specific archaeological evidence pointing to King David, the circumstantial evidence is telling. The transformations started in the highlands at the time of King David’s reign. “Moreover, the changes are consistent with larger regional changes,” Faust explained, “and all taking place at a time the Kingdom of David was supposed to have spread into this region.”

If verified, this will be the second major archaeological site attributed to King David. In 2007, Yosef Garfinkel of the Hebrew University found a large military fortress. It was about 20 miles away from Jerusalem. The fortress dated back to the early 10th century BC, when scholars believe David ruled.

One of the most remarkable links to King David is the Tel Dan Stele. It’s an inscribed stone found during 1993 excavations at Tel Dan, Israel. The inscription references a king and “his ally the king of the House of David.”

AnaRina Heymann is the director of Jerusalem Watch and outreach coordinator for the City of David. “The Tel Dan Stele absolutely one hundred percent proves that King David existed,” said Heymann. “It refutes any claim that King David was merely a story.”

“There may still be a dispute over this,” said Faust, “but today, most archaeologists agree that King David was a historical figure.”