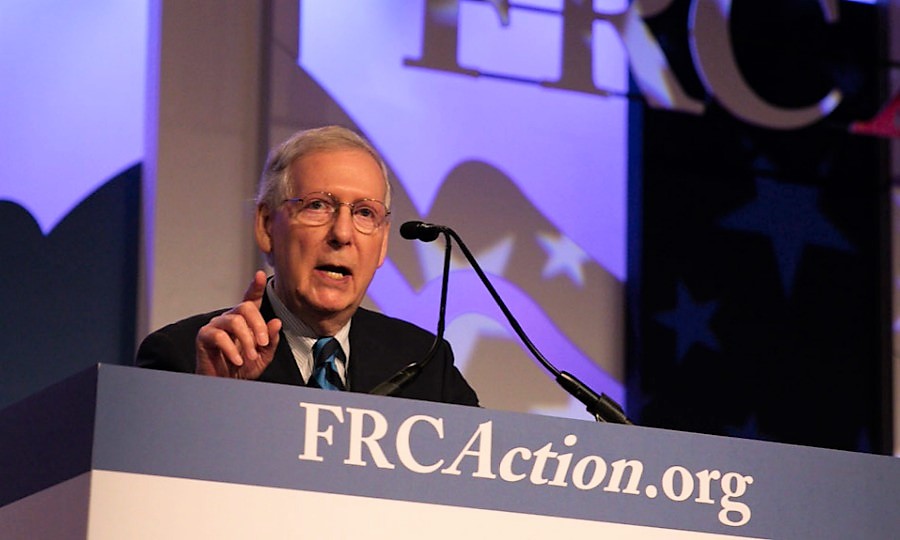 “Leader Mitch McConnell’s decision was a historic decision,” said Perkins. “It helped frame the Presidential election. [It was] one of the most courageous acts in the history of the United States Senate.”

The current battle over another Supreme Court vacancy has consumed the news in recent weeks. On July 9, President Trump nominated federals appeals court Judge Brett Kavanaugh to the Supreme Court. The Senate Judiciary Committee held confirmation hearings for Judge Kavanaugh on September 14 through 17.

“You’re all following the current Supreme Court fight,” began McConnell. “You will watch it unfold in the course of the next week. President Trump has nominated a stunningly successful individual.”

Following the confirmation hearings, a woman came forward with allegations from 36 years ago when she and Kavanaugh were in high school. She claims he sexually assaulted her. Some observers have minimized the charges as a delay tactic. McConnell’s next comments on the current nomination hit the news within minutes.

Mitch McConnell: “You’ve watched the fight. You’ve watched the tactics, But here’s what I want to tell you: In the very near future, Judge Kavanaugh will be on the United States Supreme Court… Don’t get rattled by all of this. We’re gonna plow right through it and do our job.” pic.twitter.com/nmVJVHvrVV

With the midterm elections seven weeks away, the Senate majority leader set the stage to focus on Republican accomplishments since President Trump’s election.

“You can go back a hundred years,” said McConnell. “Republicans have only had the Senate, the House, and the White House for 20 of those hundred years. We were determined not to squander this opportunity because they don’t come along all that often.”

He discussed the benefits of the recent tax reform law, notably year-over-year wage growth. McConnell also pointed out there are currently more job openings than people looking for work.

“This time, the new prosperity is not just being captured by big coastal cities and a select few industries,” said McConnell. “Small communities and rural areas have actually outpaced the big cities in rates of job growth.”

The Senate leader did not mention several legislative disappointments. High-profile efforts on immigration and criminal justice reform have, thus far, not been successful.

Values Voter Summit attendees have particular concerns. The Pain-Capable Unborn Child Protection Act, a priority of pro-life groups, failed in the Senate by a 51-46 vote in January. Currently, the annual funding bill for the Dept. of Health and Human Services continues to grant Planned Parenthood $286 million every year.

Nonetheless, with elections looming, conservative activists are laser-focused on ensuring the balance of power in Congress does not shift. Most see a host of issues tied to Republican success in November.

“My friends, keep the faith,” said McConnell. “Don’t get rattled by all of this. We’re going to plow right through it and do our job.”

Explore The Stream’s complete political coverage and sign up to receive top stories every week.