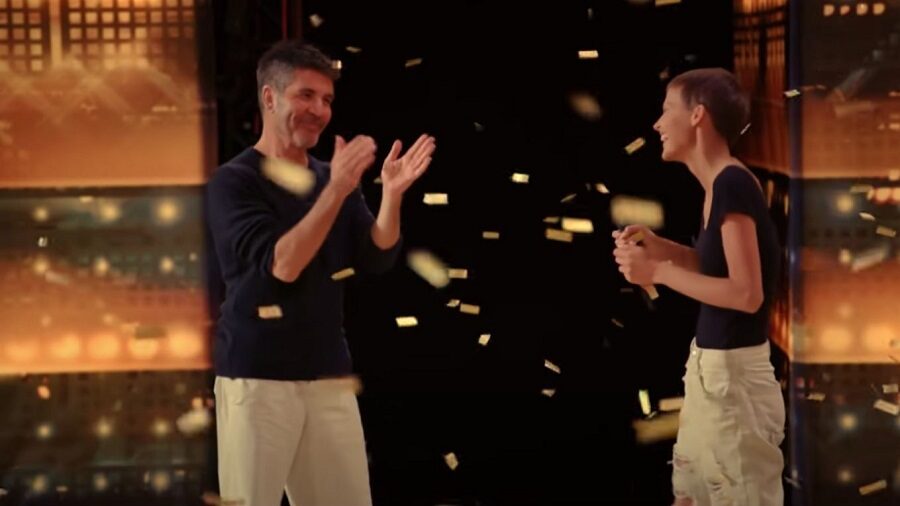 Last Tuesday, 30-year-old Jane Marczewski delivered a stunning performance of her original song “It’s OK” on NBC’s America’s Got Talent. She received Simon Cowell’s Golden Buzzer for her performance, meaning she goes straight to the live performances on the show.

It’s not just her song that’s sent the performance viral, but her story. Nightbirde (her stage name) was diagnosed with cancer in 2017 and at the beginning of 2020 was told she had three months to live. Though rail thin and still battling cancer, she’s still alive and singing.

“It’s important that everyone knows I’m so much more than the bad things that happen to me,” she said before performance.

“You can’t wait until life isn’t hard anymore before you decide to be happy,” she told the judges. Her story and her performance made the judges emotional. The notoriously tough Cowell dropped his jaw, uttering, “Wow.” He hit the golden buzzer, showering an overwhelmed Nightbirde with gold ticker tape.

Behind the stage she said, “I have a 2 percent chance of survival, but 2 percent is not 0 percent. Two percent is something, and I wish people knew how amazing it is.”

In March, the Liberty University alumna posted on her blog that she’s had cancer three times and is barely 30. She added:

There are times when I wonder what I must have done to deserve such a story. I fear sometimes that when I die and meet with God, that He will say I disappointed Him, or offended Him, or failed Him. Maybe He’ll say I just never learned the lesson, or that I wasn’t grateful enough. But one thing I know for sure is this: He can never say that He did not know me.

I am God’s downstairs neighbor, banging on the ceiling with a broomstick. I show up at His door every day.

Nightbirde received a diagnosis of cancer when she was 26. When doctors told her she had six months to live, her husband left her.

She wrote that she recently learned a new prayer: Thank you. “It’s a prayer I don’t mean yet, but will repeat until I do.”

Call me cursed, call me lost, call me scorned. But that’s not all. Call me chosen, blessed, sought-after. Call me the one who God whispers his secrets to. I am the one whose belly is filled with loaves of mercy that were hidden for me.

WATCH: (But grab a hankie first.)

PS. Within 24 hours of Nightbirde’s appearance, “It’s OK” was the number one seller on iTunes.