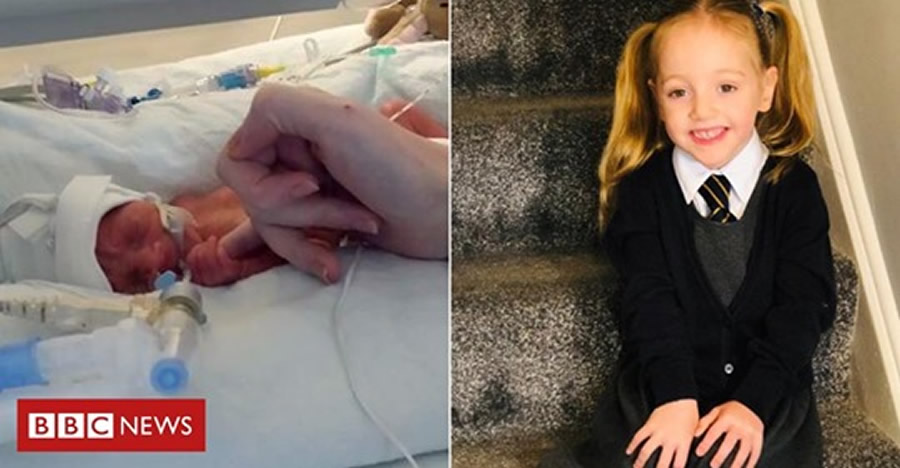 Adele Callinan, 30, has multiple chronic illnesses. She has been so sick that her doctors told her she would never conceive. That’s why she, along with her doctors, were shocked to find that the “tumor” they diagnosed Adele with was actually a baby.

According to the BBC, Adele was “gobsmacked” that she was pregnant. Doctors told her that she and the baby were not likely to survive. Adele chose life for her baby, whatever that would mean for her.

The pregnancy proved difficult. “I was literally dying before everyone’s eyes,” Adele told the BBC. “I just knew ‘I’ve got to get her to 24 weeks.'” She got her to 25 weeks.

Adele wasn’t able to see her baby for two days. “She was the width of two fingers and was see-though,” Adele explained. “I didn’t expect to actually walk out with my baby.” While in the hospital, Annabelle received blood transfusions. She also had a hole in her heart repaired. Despite the supposedly insurmountable odds, Adele did walk out of the hospital with Annabelle in November, 2015. A ‘miracle’ they say.

“I am so excited,” said Adele. “I didn’t think we would make it to this point.” Other than using an inhaler, Annabelle is a healthy 4-year-old.

Now Annabelle is starting preschool — the same school her mother attended many years ago. Although her mother says she’s a “wreck” that her daughter’s going to preschool, she is excited, too. “She will love it. She’s got lots of friends. She’s so confident … she loves talking, she loves learning.”