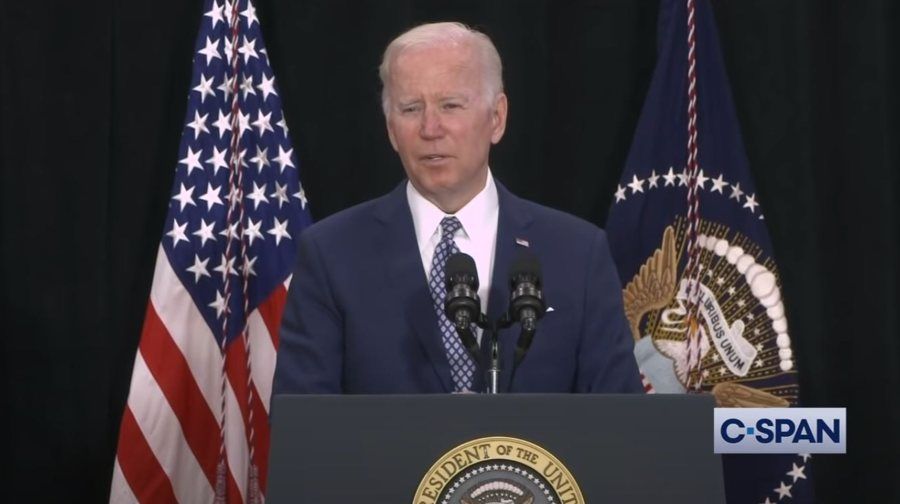 If an American president has ever given as mendacious, anti-American and hate-filled a speech as President Joe Biden did in Buffalo, New York, last week, I am not familiar with it. Nor are you.

Biden used the terrible mass shooting of black people in a Buffalo grocery store to smear America, divide Americans and foment race-based hatred. A decent man would have given an entirely different speech.

A decent man would have gone to Buffalo and said something like this:

My fellow Americans, what happened here in Buffalo was pure evil. Let there be no equivocating about this moral fact. If evil exists, what happened here was evil. But, my fellow Americans, this young man and his race-based homicidal hatred represents an infinitesimally small number of Americans, white or otherwise. The overwhelming majority of Americans of every race, ethnicity, and religion get along with each other beautifully. We work alongside each other, date each other, socialize with one another and marry one another. We are the most successful experiment in creating a multiracial, multi-ethnic, multi-religious country in world history. The actions of a deranged teenager do not change this fact.

Instead, the hater-in-chief went to Buffalo and said:

What happened here is simple and straightforward: terrorism. Terrorism. Domestic terrorism. Violence inflicted in the service of hate and the vicious thirst for power that defines one group of people being inherently inferior to any other group. A hate that, through the media and politics, the internet, has radicalized angry, alienated and lost individuals into falsely believing that they will be replaced. That’s the word. Replaced by ‘the other.’ By people who don’t look like them.

Look, we’ve seen the mass shootings in Charleston, South Carolina; El Paso, Texas; in Pittsburgh. Last year, in Atlanta. This week, in Dallas, Texas, and now in Buffalo. In Buffalo, New York. White supremacy is a poison. It’s a poison. It really is. Running through our body politic. And it’s been allowed to fester and grow right in front of our eyes. No more. I mean, no more. We need to say as clearly and forcefully as we can that the ideology of white supremacy has no place in America. None.

Look, the American experiment in democracy is in a danger like it hasn’t been in my lifetime. It’s in danger this hour. Hate and fear are being given too much oxygen by those who pretend to love America, but who don’t understand America. …

Now is the time for the people of all races, from every background, to speak up as a majority in America and reject white supremacy … We have to refuse to live in a country where black people going about a weekly grocery shopping can be gunned down by weapons of war deployed in a racist cause …

As noted earlier, this was not only a hate-filled speech; it was a speech of the Big Lie. The Big Lie of white supremacy as a major threat to America generally and to black America specifically.

Let’s examine each of the examples of white supremacist mass shootings he gave:

In 2019, a 21-year-old white racist, Patrick Wood Crusius, killed 23 people and wounded 21 others at a Walmart store. The great majority of his victims were Hispanic.

In 2018, a white antisemite, Robert Gregory Bowers, murdered 11 Jews attending Sabbath services at the Tree of Life Synagogue in Pittsburgh. As was the case with the Buffalo shooter, Bowers was a deeply troubled man. His father, while on trial for rape, committed suicide when Bowers was 7 years old, and like all the examples Biden cited, he was a troubled loner. Neither he nor any of these other shooters worked in concert with any hate group or co-conspirators.

In 2021, 21-year-old Robert Aaron Long killed eight people at three massage parlors. The killings were motivated by his sex addiction and his religious conviction that those who tempted him should be killed. Race had nothing to do with it.

“This week in Dallas, Texas”

Jeremy Smith is a black man.

Why Biden included this shooting as an example of white supremacy is a puzzle. Why no mainstream media I could find noted and condemned this lie is not puzzling.

Biden is Stirring up Anger

With these examples, Biden went to a grieving black community to lie to them in order to stir up anger in them about the alleged scourge of white supremacist violence in this country.

At least half of this country knows why Biden did this:

First, to focus Americans’ attention on “white supremacy” rather than on the inflation, looming recession, food crisis and energy crisis he and his party have created with their policies.

Second, to keep black Americans voting Democrat by saying to them, in effect: “You need protection from your fellow hate-filled Americans; we Democrats are your protectors.”

Meanwhile, 9,941 black Americans were killed in 2020. Nearly all were killed by other black people. But to Joe Biden, his party, and the mainstream, i.e., left-wing, media, those black lives don’t matter. At all. Why not? Because they weren’t killed by white supremacists, and they therefore don’t serve the Democrats’ deliberately divisive narrative.