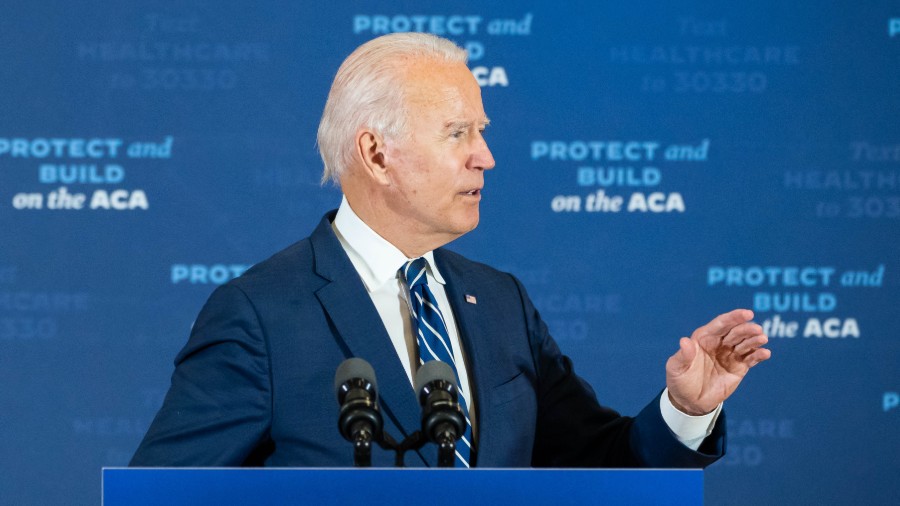 Democratic presidential candidate Joe Biden said in an interview Tuesday that there was no basis “whatsoever” to say that his son, Hunter, has profited off of his family name, a claim which the younger Biden contradicted in an interview last year.

Joe Biden was asked in an interview with Wisconsin TV station WISN about comments from Sen. Ron Johnson, who asserted in a report that Hunter Biden has “profited off the Biden name” through his foreign business dealings.

Asked whether there was any truth to Johnson’s claim, the former vice president responded: “None whatsoever.”

He said that Johnson, the Republican chairman of the Senate Homeland Security Committee, “should be ashamed of himself.”

Biden also took a shot at Trump lawyer Rudy Giuliani, who has investigated Hunter Biden’s overseas business dealings. Giuliani has also been behind the release of emails purported to be from Hunter Biden’s laptop.

“This is the same garbage Rudy Giuliani, Trump’s henchman,” Biden began to say. “It’s a last-ditch effort in a desperate campaign to smear me and my committee.”

“The vast majority of the intelligence people have come out and said there’s no basis at all,” he continued.

Despite Joe Biden’s remarks, Hunter acknowledged in an interview on Oct. 15, 2019 that he believes he was asked to join the board of Ukrainian energy company Burisma Holdings because his father was vice president.

“If your last name wasn’t Biden, do you think you would’ve been asked to be on the board of Burisma?”

“I don’t think that there’s a lot of things that would have happened in my life if my last name wasn’t Biden,” he said, adding, “because my dad was Vice President of the United States.”

“There’s literally nothing, as a young man or as a full-grown adult that — my father in some way hasn’t had influence over,” he continued.

It is unclear what Joe Biden meant by his reference to “intelligence people” in his comments to WISN.

Some Democrats have asserted that the release of Hunter Biden’s emails is part of a Russian disinformation effort. Democrats have questioned Giuliani’s involvement in obtaining and releasing emails from the laptop because of the former New York City mayor’s links to a Ukrainian lawmaker sanctioned over his ties to Russia.

On Monday, 50 former intelligence officials signed a letter asserting that Russia was likely involved in a plot to release Hunter’s emails.

Director of National Intelligence John Ratcliffe undercut the theory on Monday, saying that the laptop is not tied to a Russian disinformation effort.

The owner of a computer store in Delaware has said that Hunter Biden dropped off his laptop in April 2019 and never came back to retrieve the device. The shop owner, John Paul Mac Isaac, said that he eventually turned the computer over to the FBI.

He also says he contacted a lawyer for Giuliani last month and reached out to Sen. Ron Johnson’s office.

Despite Democrats’ allegations, neither the Biden campaign nor Hunter Biden has disputed the store owner’s claim. They have also not disputed the accuracy of any of the emails released so far from the laptop.