Jesus and the Moody Blues: A Rediscovered Letter from My Favorite Teacher 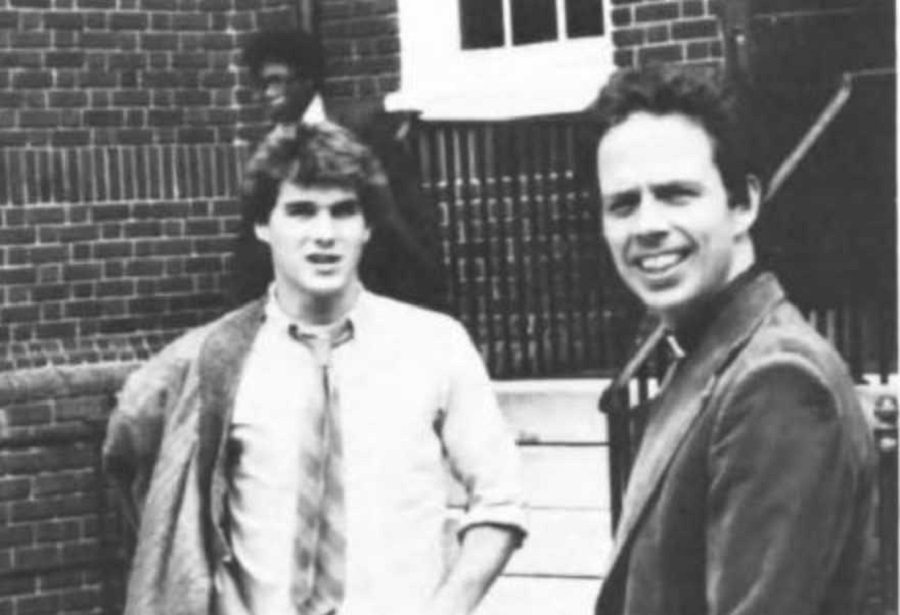 Mark Judge and Fr. Greg Hartley, in the early 1980s at Georgetown Prep.

The old letter was pressed between two books: H.L. Mencken’s Prejudices and Thomas Merton’s No Man is an Island. I found it when I was cleaning out an old closet.

As soon as I saw the handwriting on the envelope I felt the tears welling up in up in my eyes. The letter was from Father Greg Hartley, S.J.

Father Hartley had been one of my teachers at Georgetown Prep in Maryland in the early 1980s. In fact, he was my favorite teacher.

Father Hartley was a remarkable mix of deeply faithful Catholic mystic, classical liberal advocating the true meaning of social justice (everyone treated as a child of God), and rock and roll rebel. He was thin but in shape — there had been heart problems in his family so he stayed active — and had a face that somewhat resembled that of Albert Camus. One of his nicknames was “Screwtape,” because in his religion class he taught The Screwtape Letters by C.S. Lewis.

Father Hartley was like a beloved older brother to me in high school. If I said something dumb or vulgar or rude he would sharply rebuke me (he once called my friends “brewheads”). He knew that I, and the other guys, were better than that. His musical tastes were everywhere, going from classical to jazz to Johnny Cash, from Hendrix to Devo and Sting. He was brilliant and widely read and adored Jesus.

I still remember our first meeting. I was in “JUG,” the Jesuit term for detention. and he came in to supervise. I had the reputation of somewhat of a rowdy. Fr. Hartley was expressionless as he set himself up at the teacher’s desk up front. He didn’t know that I had fallen in love with Shakespeare and was maybe a bit brighter than he had heard. “Fair is foul and foul is fair,” I heard him mutter, a quote from Macbeth. I shot back: “False face must hide what the false heart doth know.”

He did a double take. No, I wasn’t your typical eight ball. From there the conversation went to Thomas Merton and Dorothy Day to Quadrophenia, to Ronald Reagan, C.S. Lewis, the spirituality of George Harrison, and to the Civil War. We became friends.

When my sophomore year ended at Prep in the summer of 1981, Father Hartley was transferred to Georgetown University, a few miles down the road in Washington, D.C. I savored our final days together, each of us prodding the other to a recommended work of art. He was insistent that I see the film Gandhi. I was appalled that he had never read The Lord of the Rings.

At the end of the year he wrote me a letter. It encouraged my pursuits in reading and writing and developing a deeper love of the Lord.

What Do I Say to Jesus?

Then I did something that surprised him. I wrote him back. I had a question: What does one say to Jesus after receiving Holy Communion? I had seen people bowed in deep prayer. What were they saying? I only knew the remote recitation that had been taught to generations of Catholics. I also offered an exegesis on Long Distance Voyager, the new Moody Blues album that I loved. The big hit off the record was “The Voice.”

Won’t you take me back to school?
I need to learn the golden rule.
Won’t you lay it on the line?
I need to hear it just one more time.

Learning to Love the Ordinary

Father Hartley wrote me back in a letter postmarked July 20, 1981. This was the document I found in my closet. I instantly recognized his small, unbelievably neat cursive writing, and the envelope from THE JESUIT COMMUNITY at GEORGETOWN UNIVERSITY. 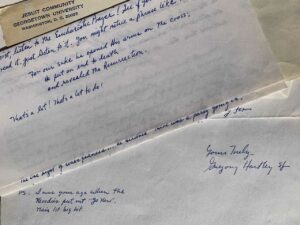 In the letter, Father Hartley detects that I am starting to drill down and ask some serious questions about the meaning of life. “I guess you’ve found out that there is more ordinary labor involved in education than you thought,” he wrote.

Gerald Manley Hopkins has a poem … which goes:

‘No wonder of it: sheer plod makes plough down sillion.
Shine, and blue-bleak embers, ah my dear,
Fall, gall themselves, and gash gold-vermilion.’

The point is there may be more glory hidden in the daily grind than we expect to see. It is an assumption, so American, that the thing that really matters is the spectacular, the extravaganza. Yet I’m sure that spiritual growth makes us see more and more mystery from the front porch.

He then addressed my question about the Eucharist:

You know, the reason I like the lyrics to good rock songs is because some of the most important truths are also the simplest. Take the line from ‘The Voice,’ that Moodies song you like: ‘Each and every heart it seems/Is bounded by a world of dreams.’ It’s amazing! Heraclitus, one of the ancient Greeks, penned thoughts very much like that. To him, mankind wandered in confusion because all were dreamers, wrapped in fantasies spun out of a small vision of things … . He considered his vocation as a philosopher to be that of waking men up to the One Light of wakefulness — he believed “There was a party going on!” and everybody was missing it.

Now the trouble with talking about the Eucharist is that everybody wakes up to it his or her own way. What do you say after receiving communion? Well, there are certain polite, respectful formalities that we observe when we meet someone, and there are definitely prayers that are good, pearls of prayer, formed over centuries. But no one else can speak for you in this case. It’s like when you meet a girl, you can’t be too worried about what you’re going to say. That puts all your attention on yourself and breaks the live connection. And a lot depends on how she responds, doesn’t it?

Now, having said that, I’ll say this. Listen to the Eucharistic Prayer. See if you notice anything. Don’t read it, just listen to it. You might notice a phrase like: ‘For our sake he opened his arms on the cross; He put an end to death and revealed the Resurrection.’ See, the Eucharist is an action. It’s done by Christ alone! All we can do is join in. We join the body of Christ, we take up the gifts. That’s us.

So try actively listening to the prayers. Then you might just quietly ask for some understanding of what is happening as the sacrament takes place. Just act reverent, and if you want a prayer to say, and sometimes that’s the best thing to do, you can use this little litany. Above all, take an attitude of faith, since faith is the opening eye. Then, as the Moody Blues song says, ‘Understand the voice within/And feel the change already begin.’

I was your age when the Moodies put out ‘Go Now,’ their first big hit!

I’ll call you later in the week and suggest a day for you to come down here. Meanwhile, be at peace.

Either an Atheist or a Jesuit

Father Hartley died of a heart attack in 2005. He was 56. The obituary in the Baltimore Sun captured him well. According to fellow Jesuit Eugene M. Gainer, Hartley “had a questioning mind. It was said he was either going to become an atheist or a Jesuit. Greg profoundly loved reading theology. He stayed up until 2 a.m. every night reading the newest and the best.” The December before his death, Fr. Hartley flew to India to spend a month in prayer with a Jesuit master. His brother said the experience thrilled him.

One of my final memories of Father Hartley was when I was a senior at Prep and he had been gone for a couple years. The news came out that his mother had passed away. A small group of about ten of us drove from Washington to Baltimore to attend the service.

Dressed in our blazers and ties, we all lined up dutifully in the back rows. Father Hartley seemed genuinely moved that we had come. I examined the beautiful, sorrowful intelligence of his face — Camus in grief. I approached him after the service. “Father Hartley,” I said. “All things must pass.” It was a quote from one of our favorite George Harrison songs. He looked at me with the understanding that I was not just quoting a rock lyric, I was acknowledging a deep truth about God’s universe and the reality that we are all passing through.

He met my eyes with what I can only describe as profound brotherly love.